T&G Does By the Bog of Cats, and ALP Has Hairspray Jr. 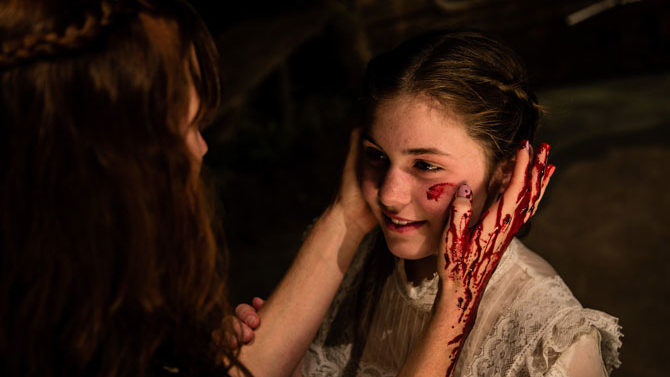 By the Bog of Cats

At this point in a long, hot summer, imagine sitting in a cool, darkened theater surrounded by eerie mist coming from a dank, decaying Irish bog. It’s viscerally bleak, supernatural and emotionally raw in the way that Greek myths express so well: By the Bog of Cats is a resetting of Euripedes’ Medea by Irish playwright Marina Carr.

Perhaps you know the story of Medea, the spurned wife of the hero Jason—a famous tragic heroine whose sense of personal injustice is, to put it mildly, intense. If so, then you will know not to expect a delightful, romantic summer comedy. If you’ve had enough of summer by now, you might be ready for this brutal tragedy as a refreshing change of pace—but don’t buy a ticket expecting everything will work out right in the end. What Ramsey Bolton said to Theon Greyjoy in Game of Thrones would apply here: If you are still expecting a happy ending, then you have not been paying attention.

This Town & Gown Players production of Cats is about an Irish traveler named Hester Swane (played by Jessica Tiegs), a wildly magical woman who was abandoned by her mother as a child. Now a mother herself, she faces rejection again. This time it’s her weak, soon-to-be-former-fiancee (Carthage Killbride, played by Eben Elrod), who is abandoning both her and their child so that he can marry wealth and position, instead. As one might expect of a powerful, dangerous woman, Hester does not take this lying down. In her desperation, she undertakes a chilling course of vengeance, while Killride manipulates her fellow townfolk into believing she is a madwoman.

Director and T&G veteran Carina McGeehin wants to apologize in advance for any emotional damage the show may dole out to the audience. It’s a harsh world (with, alas, no actual cats), with denizens who have learned to harden themselves in order to survive—and Hester is the toughest of them all. To pull this off, you need a strong cast, which McGeehin and assistant director Beth Kozinsky have assembled: T&G/local theater names include John Olive, Genevieve Esquivie, Emily Myers, Derek Adams, Jayne Lockhart, Shelby Marquardt and David Swisher; UGA theater students Bridgette Duffield and Tom von Dohlen join the cast as well. Jessica Teigs and Eben Elrod make their T&G debuts as Hester and Carthage, with their daughter Josie played by local 6th grader Addison Faye Griffith.

A production like this calls for top-notch design, and McGeehin (who describes herself as “a techie at heart”) has assembled a dream team: lighting designer Graf Imhoof, costume designer Harriet Anderson, set designer Dillon Nelson, scenic painter Bryn Adamson, make-up designer Tabitha Ford and hair designer Becky Ann Brooks. This one should be a feast for the eyes and a chilling tale to disturb your mind. Take a break from the scorching humidity and let the mists roll over you one dark summer night soon.

Athens Little Playhouse is midway through its kid-friendly production of Hairspray Jr., a musical based on John Waters’ outlandish Broadway hit that follows spunky diamond-in-the-rough Tracy Turnblad as she dances competitively to de-throne the reigning Miss Teenage Hairspray on the Corny Collins TV show.

The show was developed as a summer camp project, and children were responsible for organizing everything from fundraising to constructing and painting the set.

Performances in the Athens Little Playhouse in the Alps Village shopping center are slated for Friday, Aug. 7 at 7 p.m., Saturday, Aug. 8 at 3 p.m. and Sunday, Aug. 9 at 3 p.m. Tickets are $5 for children and $10 for adults.

Actors can gear up for Town & Gown Players’ next performance, William Shakespeare’s MacBeth, during auditions on Monday, Aug. 10 and Tuesday, Aug. 11 from 7–10 p.m. at the Athens Community Theater. All ages and experience levels are welcome, and auditions will consist of cold readings from the script.

Athens Creative Theatre will hold auditions for Mary Poppins on the same evenings—Monday, Aug. 10 and Tuesday, Aug. 11 from 6–9 p.m.—at Quinn Hall in Memorial Park. Roles are available for ages 8 and older. Actors should prepare a 16-bar solo from any Broadway musical and bring along sheet music for piano accompaniment. Performances are scheduled for Thursday, Nov. 12–Sunday, Nov. 15 at the Morton Theatre. For more information, call 706-613-3628.