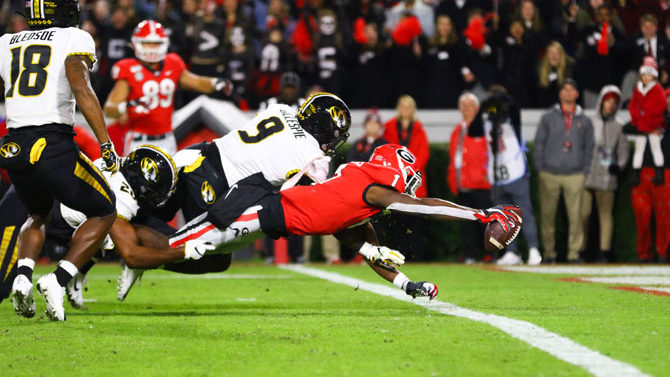 Anyone who reads this column regularly knows I don’t like to complain. I mean, I do complain. Frequently, in fact. But that doesn’t mean I like it. It just feels necessary sometimes.

This is one of those times. I know it’s hard to complain too much about a 27–0 shutout victory, even for Georgia fans. That’s why they pay me the big bucks. Despite a ton of good that was on display in Georgia’s shutout victory over Missouri at Sanford Stadium, there was also plenty of bad that made this win at times one of the more infuriating blowouts I’ve ever seen.

Maybe “bad” is too strong of a phrase, though. What I’m really talking about is less “bad” in the traditional sense and more “not good enough.” Offensively this season, the first under Kirby Smart’s new offensive coordinator James Coley, the Dawgs have struggled to finish drives with touchdowns instead of field goals, and that problem was on full display against Missouri.

As always, Rodrigo Blankenship was excellent in the kicking game, making four of his five field goal attempts, with a long of 48 yards. But the problem isn’t Rodrigo. It’s the fact that we had to kick five field goals, two of which came from inside the red zone and a third (missed) from the 26-yard line. That’s 15 points left on the board right there had they finished those drives with touchdowns instead of field goals. There’s also the matter of a potential 60-yard touchdown catch from George Pickens—who still finished the night with 67 yards receiving and two touchdown catches—that was called back for an illegal formation. In a world in which the offense was just a tad sharper, the final score could have been as high as 49-0.

Now, that would have been a real statement shutout. A win is always a win, and shutout is always a shutout, but that extra little bit of scoring would have made a big difference for a fanbase that has been worried about the offense all season.

On paper, it doesn’t look like Georgia has any red-zone issues. The Dawgs rank second nationally in red-zone offense, scoring on 97% of trips inside it. But 13 of their scores in the red zone have come on field goals, with 25 coming on touchdowns. Compare that to LSU, which has the best red zone offense in the country and just 10 red-zone field goals to 38 red-zone touchdowns. That’s the level we have to match now that we’ll likely face LSU in the SEC Championship Game. It’s a high standard, but it’s the one you have to live up to when you compete at this level.

The Dawgs converted three red zone field goals in the 24-17 win over Florida, a touchdown on any of which would have made the final moments and scoreline of that game much more comfortable. And don’t tell me that game wouldn’t have been way more enjoyable if we had beaten Florida by more than a touchdown.

We’ve still got three regular season games to play, plus the SEC Championship game and at least one bowl, but Rodrigo has already kicked 22 field goals this season, one off of his career-high (23). I love Rodrigo as much as everyone else, and I love to see him put up points for Georgia. But he’s been just a bit too important this season for my liking. As fun as it is to see him boot in a 50-yarder, I’ll always prefer seeing him nail extra points to field goals.

Amidst all this whining, I shouldn’t go without saying that the offense must first do lots of good things to set up disappointing field goal attempts. Jake Fromm passed for 173 yards and two touchdowns. Pickens had the best game of his career. Lawrence Cager continued to impress with 93 yards receiving before leaving the game after he aggravated a shoulder injury. (Kirby said postgame that Cager would be fine, along with a trio of offensive linemen who left the game injured.) The offense is good, verging on really good. It just needs to start scoring more touchdowns, if nothing else to keep me from pulling out my hair every time we get in the red zone.