An Upset Loomed, Then Georgia Blew Away Tennessee 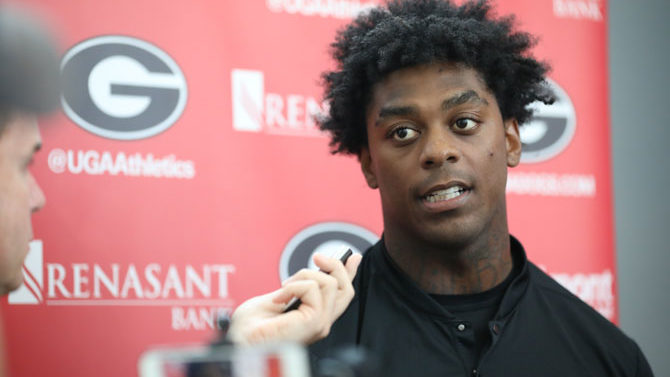 Early on, everything was going Tennessee’s way. Despite Georgia forcing the Vols to punt on their first drive, and the Dawgs marching 84 yards on 12 plays to take an early 7-0 lead on theirs, things quickly went awry in Knoxville. Freshman quarterback Brian Mauer tossed a 73-yard touchdown pass to Marquez Calloway to tie the game 7-7. Rodrigo Blankenship hit a 50-yarder on Georgia’s next drive to take a three-point lead, but Tennessee responded with a methodical, 10-play 75-yard drive to go up 14-10 as the second quarter began.

I’ll admit it. At that point, I was scared. Georgia-Tennessee had all the makings of an upset. Road game? Check. Night game? Check. New quarterback brimming with confidence? Check.

But even though I knew there was a possibility of the Vols pulling out all the stops and scoring the upset of the year—unseating their own loss to Georgia State for that spot—I also knew all the weapons the Dawgs were about to deploy. And I knew that we’re Georgia, and they’re Tennessee.

In the end, though, it was just the right amount of scared to make the eventual blowout all the more satisfying. After Tennessee’s go-ahead touchdown to begin the second quarter, Georgia scored 33 unanswered points to win 43-14. Two touchdowns in the final four minutes of the first half to give the Dawgs a 26-14 lead assured that the once-raucous Tennessee crowd knew its place heading into halftime as the possibility of an upset evaporated before their eyes. It was a classic case of playing with your food before you eat it. My mom always said that’s rude, but she’s never won an SEC championship.

Georgia’s main issue in the early going was the pass defense, which has been the biggest issue for the defense as a whole this season. Richard LeCounte got burned by Calloway on that 73-yarder. After that, Mauer’s confidence grew, and the crowd was brought to life. Mauer passed for more than 200 yards in the first half, mostly dinking and dunking and taking what the secondary would give him. If there is a position group that could lead to Georgia’s downfall his season, it’s the secondary.

But there was plenty of reason for Georgia fans to be confident. Namely, there was Jake Fromm, who put in his best performance so far this season. From Georgia’s first drive of the game, when he went 4-for-4 for 59 yards, it was clear that Fromm was clicking on all cylinders. He finished the night 24 for 29 with 288 yards, two touchdowns and still no turnovers this season.

And while the pass defense was suspect, at least in the first half, the run defense was not. Georgia held the Vols to just 70 rushing yards. Meanwhile, on the other side of the ball, the running game was as good as you’ve come to expect. Even though no individual eclipsed 100 yards rushing for the night, the Dawgs rushed for 238 yards as a team. Fromm’s performance and this disparity in the run game are what allowed Georgia to maintain control of this game even when Tennessee held the momentum early.

What handed Georgia the game late and assured a dominant final score was the havoc created by the defense. LeCounte snagged an interception in the second quarter to halt a promising Tennessee drive in its tracks and make up for that mistake on Tennessee’s first touchdown. The drive after going up 36-14 on a Brian Herrien touchdown, a brutal sack and forced fumble from Eric Stokes led to a 60-yard scoop and score from Tae Crowder to give the Dawgs their second defensive touchdown of the year.

Even though this game had the potential to go very wrong, in the end, Georgia covered the 24-point spread and dominated the Vols. It wasn’t a perfect performance, but it was a performance that showed just how good the Dawgs can be when they buckle down. And to put the icing on the cake, having trailed since 1993, Georgia now leads the all-time series 24-23-2.

Despite what my mom says, sometimes it’s OK to play with your food before you eat it.