Despite America’s Shortcomings, the U.S. Women’s Soccer Team Is Still Worth Rooting For 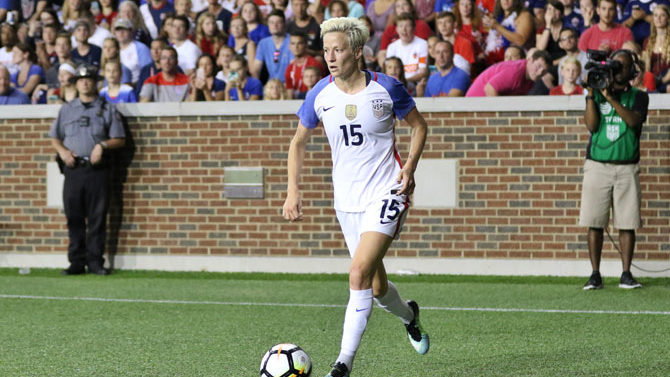 Summer is upon us once again, but it’s not just any summer. It’s a World Cup summer. The 2019 Women’s World Cup kicks off June 7 in France, giving us all a good excuse to gather with friends, drink during the day and cheer on the good ol’ U.S. of A.

But cheering for America isn’t as easy for me today as it was when I was young. I used to think America was great, and all other countries weren’t as good, just because that’s how I was raised. But with a little time and a lot of introspection, I’ve come to the conclusion that the opposite is probably true. And when these big, international competitions come around—whether it be a World Cup or the Olympics—I struggle with the quasi-jingoistic feeling of cheering for America to crush other countries. Do I really want to pull on a red, white and blue shirt and a pair of American flag shorts when it’s become more clear than ever that we, as a nation, kinda suck?

Of course, there’s the big, wet boy in the White House, but he’s only the beginning of our concerns. For us Georgians—as well as Alabamians and citizens of a few other backwoods states—there’s the recent spate of cruel abortion bans. There are any number of Forever Wars that have been raging since I was in middle school, and the specter of a new, unwinnable one with Iran looming. There’s a concerted effort to dismantle the minuscule progress we’ve made on LGB and transgender rights. And that’s on top of world-high incarceration rates, the targeting of people of color by America’s police forces, workers constantly being walked over by management, tax cuts for the wealthy while folks in the underclass struggle to make ends meet, the impending climate disaster and plenty of other hellscape-type stuff.

We were able to avoid this question during last summer’s World Cup, thanks to the fact that the U.S. men’s national team is butt and missed the tournament altogether. Not so with the women, who are good and cool. Like, really good. Like, favorites to win their second consecutive World Cup and record-setting fourth of all time. And they’re a hell of a lot of fun to watch, to boot.

For one thing, the USWNT players are in the midst of a federal lawsuit against the U.S. Soccer Federation over institutionalized gender discrimination. Despite being wildly more successful than the men’s team, the women make a fraction of what the men make in appearance fees. (FIFA is also driving this, as total prize money for the Women’s World Cup is $30 million, compared to $400 million for the men.) The women are also regularly forced to play in substandard conditions, such as on artificial turf, that make players more susceptible to injury. Although many of these women have large endorsement deals and live very comfortable lives, it’s important to stand in solidarity with anyone who fights against discrimination and for equal pay.

USWNT players have also been much more willing to speak up on social issues than professional male athletes in almost any sport. Megan Rapinoe followed the lead of Colin Kaepernick and knelt during the national anthem to protest police brutality against black Americans. Alex Morgan recently spoke up in Time against the separation of migrant families at the border. USWNT players have long been vocal about LGBT rights, partially because many USWNT players are members of the LGBT community themselves.