The Bulldogs Have Been Lucky So Far, but Luck Can Run Out 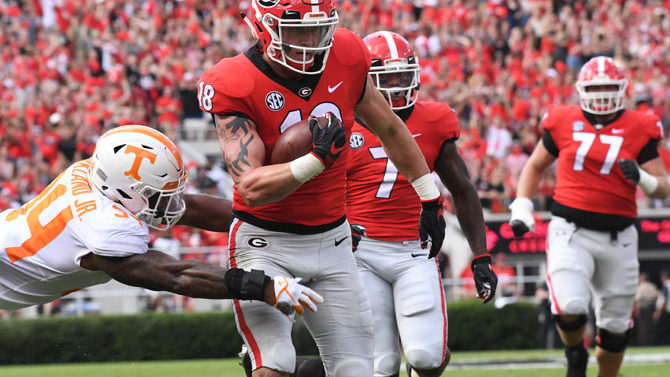 The theme of Georgia’s season so far has been the Bulldogs trying—and often failing—to win in a fashion commensurate with their new station near the top of the college football pecking order. Kirby Smart was brought to Athens to oversee the Alabamafication of the program, and based on the muted reactions of players, coaches and fans to a 26-point win over Tennessee, I’d say that process is complete. In this new age of Georgia football, it’s not only about winning but also how you win.

Georgia beat Tennessee 38-12 Saturday in Athens, and just like the Missouri game a week ago, no one was that happy about it. It was a sound victory in the end, but with Tennessee entering the game as the clear weakest link in the SEC East, and Georgia being 31-point favorites, fans were hoping for a better performance. As in most games this season, Georgia suffered from undisciplined play and boneheaded penalties. It was buoyed by a solid helping of luck.

If not for a few lucky bounces, there’s a good chance the 26-point margin of victory would’ve been a lot tighter. I wouldn’t go so far as to say luck won the game for the Dawgs, but it certainly helped. The Vols already knew they were in for an uphill battle, and as soon as it became clear that luck was a Bulldog on Saturday night, they pretty much resigned themselves to defeat.

The moment it was clear that everything was going to go Georgia’s way Saturday came on the Bulldog’s first drive of the game, midway through the first quarter. Jake Fromm was strip-sacked on 3rd-and-9 in Tennessee territory, nearly upending the opening drive. But before any Vol could jump on the loose ball, tight end Isaac Nauta snatched it off the ground and dashed 31 yards for a touchdown.

The other bit of luck came via Rodrigo Blankenship, who remained perfect on extra points despite freshman punter Jake Camarda bobbling a hold, leading Blankenship to run past the ball. Instead of panicking and trying to scramble in for a two-point conversion, Blankenship backed up, planted his foot and eeked the ball through the uprights. It was incredibly lucky and cool.

Those aren’t the first swings in luck Georgia has seen this season. The Dawgs got lucky on Deandre Baker’s would-be pick-six against South Carolina, when he dropped the ball before crossing the goal line. Had Jawaun Taylor not been in a position to scoop that up, maybe Georgia isn’t able to establish that 14-0 lead. Maybe the Gamecocks score first and change the entire dynamic of the game. Ditto Jeremiah Holloman’s goal-line drop last week against Missouri. That came with Georgia only leading by 13 points and could have made the final two quarters a lot more tense.

They say it’s better to be lucky than good, but on Saturday, Georgia was both lucky and good. (As much whining as there’s been about this game/season from me and others, you don’t beat any SEC East team, even the worst one, by 26 without being pretty good.) It just wasn’t good enough to meet the standard set by Smart. The Dawgs incurred six penalties, one off the season-high, and fumbled four times, although none were recovered by the Vols.

Georgia has to play better going forward, because there will come a day when the luck runs out. Luck is a zero-sum game. Tennessee was unlucky as much as Georgia was lucky on Saturday. We may want to think the stars are aligning for the Dawgs, but it was just as likely a bit of cosmic punishment handed down to the Vols for being oh so very Tennessee.

Point being, Georgia can’t rely on fortune all season, especially in the games that aren’t expected to be blowouts. This was the warmup phase of the season. The Dawgs were clearly more talented than every team they’ve faced so far. They’ve got one more week of that when Vanderbilt comes to Athens this Saturday. Then begins the meat of the schedule with a trip to Baton Rouge to face LSU, a team every bit as talented as Georgia. It’ll be great news if Georgia gets lucky that night in Death Valley. It’ll be better news if they’re just good.