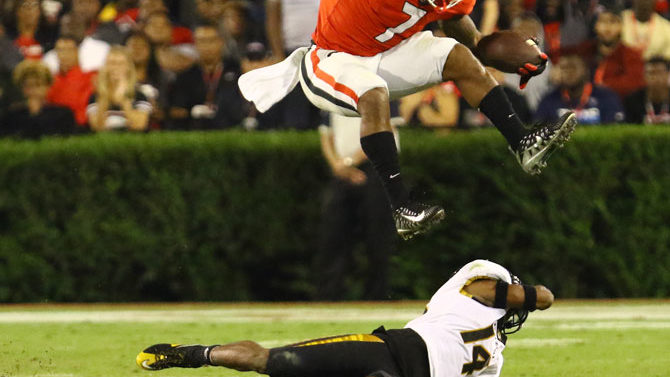 When Kirby Smart was hired by Georgia, he spent much of the spring of 2016 selling hype and hope, banging the drum for “93K Day.”

I was skeptical Smart would draw the crowd. Every G-Day I’d ever been to involved a smattering of fans strewn about Sanford Stadium, watching the scrimmage for a half-hour before heading downtown to enjoy the rest of their Saturday. But as he’s done many times since, Smart proved me wrong. Buoyed by belief and eager to back a winner, 93,000 fans packed out Sanford for G-Day ’16.

Two years later, Dawg fans don’t have to believe anymore. They’ve seen. In his second season, Smart led the Bulldogs on a surprising run that included wins over every team in the SEC East, an undefeated home record, an SEC championship, a Rose Bowl win and an appearance in the national championship game.

So when I heard Smart called for a sellout of Sanford for G-Day 2018 (this Saturday, Apr. 21), I didn’t waste time doubting. Since answering his call for a “93K Day,” I’ve seen seas of red descend upon South Bend, IN, Pasadena, CA and Atlanta (twice). Dawg fans are excited for the future and buying what Smart is selling. If he says it’s important to show up for G-Day, they’re showing up.

However, there will be no “93K Day” this time around. Construction on the new West End Zone plaza, scoreboard and recruiting area has blocked off a large swath of seats. Georgia has even instituted assigned seating for G-Day in an effort to avoid the chaos that would ensue from 93,000 people trying to cram into a venue that fits far less.

The West End Zone project itself is a testament to the progress the program has made since Smart returned to Athens. The administration sat happy for years while Sanford became dated and the fan experience deteriorated. Then Smart showed up, won a few games and told them if they want him to keep winning, he needs a modern stadium where fans are excited to go and he can host the nation’s best recruits.

Things are changing, but change is good. Change is progress.

That notion applies beyond a revamped Sanford Stadium to the team itself. The 2018 Bulldogs will look much different than their 2017 counterparts. The dudes from the legendary 2017 senior class will be missed, and you’ll have to to learn a lot new names. The 2018 season will be one of major, necessary changes as Smart attempts to fix what didn’t work in his first few seasons and fine-tune what did.

Take Georgia’s secondary, for example. A lot of experienced defensive backs exited the program after last season, like Dominick Sanders, Malkom Parrish and Aaron Davis. Like most members of the 2017 senior class, I was fond of all those guys.

Sanders and Parrish were good players who contributed a lot to the program over their time in Athens, but their miscues cost Georgia the national championship, in the most micro of senses. If Parrish bumps DeVonta Smith or Sanders doesn’t stare down Tua Tagovailoa in overtime, maybe the Bulldogs live to fight a few more downs and win the title. It may seem harsh to criticize them for these single mistakes over years-long careers, but those are the margins between winning and losing national championships.

Georgia needed more talent in the secondary, so Smart went out and got more talent. Five-star Tyson Campbell, the first blue-chip, shutdown corner Georgia has signed in ages, will be on campus this fall. That’s in addition to a slew of other four-star DBs Smart has signed in the last two years. Star ratings aren’t everything, but pretty much every DB fighting for a spot in the secondary is rated higher than Sanders, Parrish and Davis out of high school.

There will be plenty of change on offense, too. For the first time in four years, neither Nick Chubb nor Sony Michel will line up in the backfield. They left as not only the most prolific rushing tandem in school history, but as the most prolific tandem in college football history. Their work—along with other great Georgia rushers—has helped UGA build a reputation as Running Back U, which Smart and his staff use to sell the best high-school tailbacks on playing in Athens.

And it works. Georgia has been and will continue to be the most loaded team in college football in terms of running-back talent. Rising sophomore D’Andre Swift will likely take the bulk of the carries in 2018, but Elijah Holyfield and Brian Herrien will also finally get their chances to step into the spotlight. That is, if they can hold off five-star freshmen Zamir White and James Cook.

The most exciting part off all this change is that it brings us right back to the emotions Smart first instilled in Georgia fans: hope and hype. Considering the top recruiting classes he’s signed and what he was able to do with a group of Mark Richt players, you have to be excited about what Smart will do when he fields a team full of players he recruited. Because as beloved and awesome as the players in the senior class of 2017 were, they aren’t as talented as the kids Smart is bringing to Athens now. Not even close.

Change is good. Change is progress.