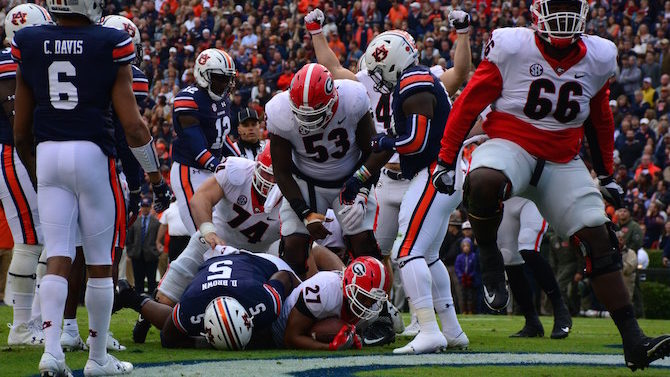 Georgia got its ass beat. There’s no other way to say it. Auburn welcomed the Bulldogs to the Plains and handed them their first loss of the season, landing a blow to UGA’s College Football Playoff chances while bolstering its own.

Losses always hurt—especially the first loss of the year, at the hands of one of your most hated rivals. But this is not one of those “end of the world” losses like Georgia has suffered so many times over the last few seasons. It doesn’t derail the season or prove Georgia is bad. Beating a top-10 team on the road is one of the hardest things to do in college football.

It’s also so, so difficult to go undefeated in college football. There are only four undefeated teams left, and it’s possible only one of them makes the playoffs.

All that is to say, Georgia can still achieve everything it dreamed of before this season and more. The Dawgs are already in the SEC Championship Game. They’ll go to the CFP, probably ranked No. 1, if they win out. But to do that, they’ll need to learn from their mistakes against Auburn.

The first issue that must be corrected is dumb penalties. Penalties didn’t cost Georgia this game, but they did put it in a mighty deep hole. The Bulldogs had seven penalties for 75 yards, compared to Auburn’s five for 29. The penalties numbers would’ve actually been close if it wasn’t for a couple of boneheaded 15-yarders, one when Deandre Walker leapt to try and block a punt, another when Sony Michel scrapped with an Auburn player following a punt. Both of those drives ended in Auburn touchdowns. The good news is penalties, especially personal fouls, are, in theory, easy to correct. If this team is mentally tough, we won’t see those kind of penalties happen again this season.

Georgia must also make plays. Twice Jake Fromm had an open receiver streaking down the field for an easy touchdown and couldn’t connect. He missed Javon Wims in broken coverage early, then took a sack when a flea-flicker had Mecole Hardman dashing untouched toward the end zone.

Fromm is far from a bad quarterback, but he is a young quarterback who is still working out the kinks. Auburn’s defense swarmed him often Saturday, and pretty much every time, he looked like he didn’t know what to do. Fromm must learn how to extend plays with his legs, either to find a passing lane or run the ball, or the best defenses will tear him to shreds.

That brings us to the most difficult issue to correct: the trenches. Auburn dominated Georgia on both lines of scrimmage Saturday, something that hadn’t happened to the Dawgs yet this season. The problem is there is no easy solution, other than to say, “play better.” And Georgia must play much better on the lines to win the SEC championship, regardless of the opponent.

In some ways, this loss simplifies things for Georgia and maybe puts the players in a better headspace for the stretch run. This team knows it can be beat now, and they know they can’t let that happen again. It won’t play the final games trying to protect a perfect record and make the CFP. It’s just trying to make the CFP.

Now we have to win our way in and beat Alabama or Auburn to make it to the postseason, and that’s the way I prefer it. You don’t want your team to back into the CFP, feeling lucky to be there. You want them to go in on a hot streak, guns blazing, ready to take on all comers.

You never want to lose to a hated rival like Auburn. But if it serves to light a fire under Georgia players for the final four or five games of the season, I’ll take it.