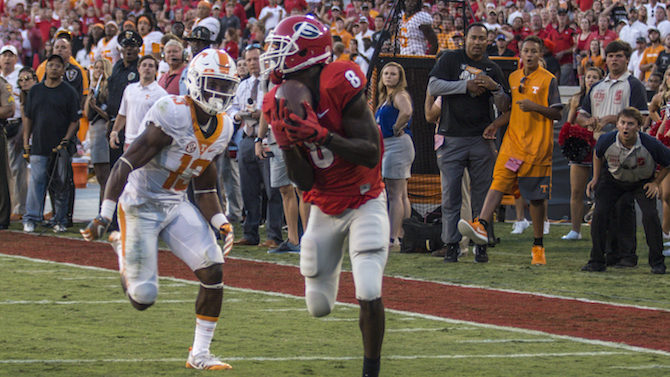 Oh, boy. Where to begin with this one?

On the positive side, Jacob Eason’s 47-yard bomb to Riley Ridley with 10 seconds left that put the Dawgs up 31-28 on Tennessee Saturday in Athens was the most exciting moment of the Kirby Smart era so far. Unfortunately, only the negative matters, because after the ensuing kickoff, Josh Dobbs threw a 43-yard strike to Juaun Jennings as time expired to give the Vols a 34-31 victory and send me into a pit of despair and shock from which I have yet to emerge.

It’s hard to comprehend shocking, fluke defeats like this one. But we’re Georgia fans, and we’ve been here before—see: Auburn, 2013—so we know you have to look for the little things at the end of the game to find out how it all went wrong. And when you look back at everything after that wonderful would-be winner from Eason, you see a trail of mental mistakes that put Tennessee in position for a shot at the end zone.

First was the unsportsmanlike conduct penalty we incurred celebrating Eason’s TD, and it’s a tough one to be mad about. It was the most exciting thing a Georgia team has done in a few years now. I was out of my seat yelling like an idiot. I can’t imagine how the players were feeling. I wish the players had shown a bit more restraint, but mostly I just wish the ref had kept his flag in the pocket. As long as no one is doing the DX “Suck it!” chop, refs should just let teams celebrate possible winners at the end of game.

Either way, the result was the same. We kicked off from our own 20 instead of the 35. That’s 15 free yards for the Vols, along with acres of space to run in.

It didn’t help that kicker Rodrigo Blankenship got little leg on his kick. That could have been an order from Kirby Smart to pooch it in an effort to force a return that would run out most of the clock, though. If so, mission accomplished, I guess, as the Vols only ended up with four seconds.

Two more mistakes compounded on the kickoff to give Tennessee its winning field position. On Evan Berry’s return, multiple Georgia defenders whiffed on tackles in Tennessee’s half that would’ve forced Dobbs into 50- or 60-something yard toss to the end zone, instead of the 43-yarder he got. And he only got the 43-yarder because we lined up offsides on the kickoff to give the Vols five more free yards (prolonged sigh).

Then came the actual Hail Mary. I’m not typically one to second guess the actual Xs and Os a coach calls simply because I hold a modicum of the football knowledge that Smart, or any other UGA coach, holds, and I know it. I prefer vague generalizations. But I think it was a mistake to rush three on Dobbs. Without any pressure, he was able to step into his throw and deliver it right where he wanted it.

Of course, my notion that he should’ve rushed four is informed by the knowledge that MOST OF OUR PASS DEFENDERS DID NOTHING. They all flooded the back of the end zone. No one attempted to front Jennings, and he out-jumped everyone. All he had to do was turn and the ball was waiting for him.

And that’s the recipe for a miracle: two penalties, a possible pooch kick, missed tackles and poor pass defending. Mistakes upon mistakes upon mistakes. Each was small, but each was significant. By themselves they’re pretty innocuous. Combined, they’re lethal.

It’s worth remembering that Smart is a young coach, and this is a fairly young team. Mistakes were expected this season. It just really sucks to see such small, mental ones directly lead to a loss.

The good news—if there is any—is these mistakes should be fairly easy to learn from and clean up. After the game, Lorenzo Carter, one of the players out-jumped on the final play, said that Hail Mary defense was something they already practiced. Smart is a new coach. I’m guessing it’s something he practiced because it’s something football teams always practice. Maybe he never practiced it with purpose, though, and it cost him a game. When good coaches get bitten by something and lose games because of it, they make sure it never happens again. Time to see if Smart is a good coach.