With a New Coach and QB, Dawg Nation Is Hyped for G-Day 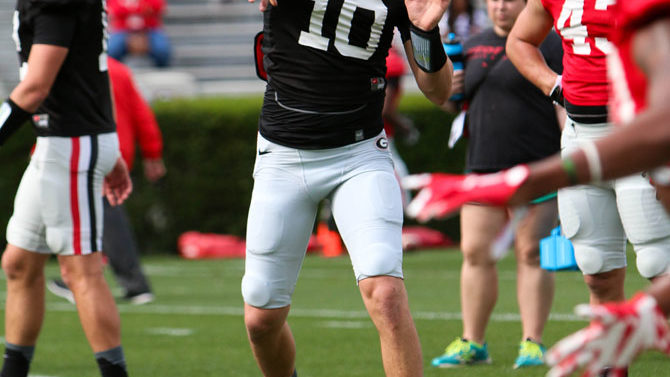 Let this be a warning to those denizens of the Classic City who mistakenly think college football is an activity reserved for fall. On Saturday, Apr. 16, your typical, easy-going downtown brunches will be interrupted by thousands of red-and black-clad Georgia football fans who will descend upon Athens for G-Day, a football game that doesn’t matter. I’m not saying it doesn’t matter in the existential way we might ponder, “Do sports even matter, man?” after a few too many bong rips. I’m saying it literally counts for nothing within the realm of college football.

You see, college football season is a yearlong venture these days, and it can be broken into four sub-seasons. There’s the season proper in autumn, which you surely know all about. Then the offseason is broken down into three phases: recruiting, spring practice and summer workouts.

This year, the excitement for G-Day is through the roof. Saturday presents the first opportunity fans have to see how new head coach Kirby Smart has changed the program in his few months in charge—aside from almost single-handedly destroying some of Georgia’s open-records laws. We’ll finally get to see how much progress he’s made in turning Georgia into Alabama 2.0 (probably not much).

With excitement will come an attendance spike. Georgia typically draws a fairly good crowd for G-Day, filling large swaths of Sanford Stadium. But this year it could almost reach capacity as fans get pumped to see what Smart has in store. Smart himself is pushing to get 92,000 fans to block out time on one of our limited, beautiful spring days and watch football that doesn’t matter.

If you’re the type who hates the game day crowd, I suggest you vacate Athens on Saturday, because it’s pretty much going to be game day lite. It won’t be as raucous as a game day—and many fans will leave the game early, since there really is no winner or loser—but it will probably still be tough to maneuver around Athens through the barking masses. If you’ve been looking for a good day to get out of town or float the Broad or something, Saturday is a good time to do it.

For those who do care about G-Day, get excited, because FOOTBALL IS HERE. Do you realize it’s been months since I watched a football game? MONTHS! If there’s one thing I need in my life regularly, it’s grown men colliding into one another at a high rate. And after Saturday, it’ll be August before we get football again. G-Day will be a bad football game that counts for nothing, but, by God, it’s football. Cherish it, people.

So what should we look for on the gridiron Saturday to determine how far we’ve come in the Smart era? Almost the entire reason for bringing Smart on board was to get more of an Alabama vibe around the Georgia program, and Alabama excels because of its defense. Mark Richt’s final gift to Georgia fans was stocking the cabinet for Smart through excellent recruiting, so the defense should be loaded for bear. It’ll be interesting to see how Smart’s scheme, filled with Georgia’s personnel, will compare to Jeremy Pruitt’s.

Offensively, it’s all about early-enrollee quarterback Jacob Eason. He’s taken third-string snaps all spring, which makes sense for a guy who should be getting ready for senior prom. The few minutes Eason plays will be the most exciting of the afternoon by far, and it’ll give us the first glimpse at the true future of the program. Whether he starts from day one or not, make no mistake, Eason is UGA’s QB of the future, and fans are clamoring to see him don those silver britches.

So, Flagpole readers, you’ve been warned. G-Day is coming, and there’s nothing you can do to stop it. If you hate football, sorry. It’s the one day in spring for football fans, and we’re gonna take it. You can have Athens back afterward.