Escape the Space Is a Video Game Come to Life 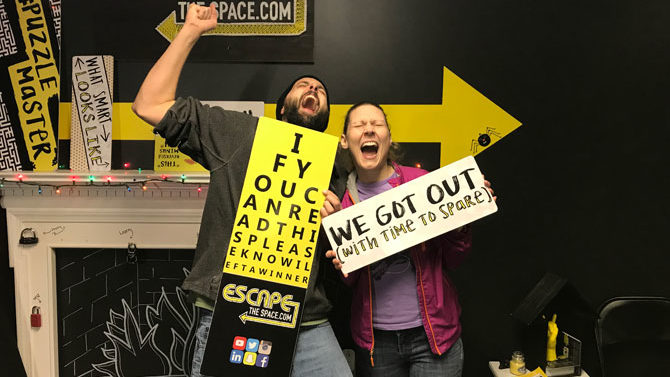 Gamers who are looking to step away from their online avatars, assume their flesh and blood forms again and reacquaint themselves with the 3D world might want to try their hands at cracking the codes at Escape the Space, an Athens game facility where participants work together to solve problems and riddles, decipher codes and eventually make their way out of locked rooms, sometimes carrying tens of thousands of dollars and comically large diamonds with them.

Escape the Space owners Alicia and Andrew Brasher launched the company in 2014 at a two-room facility at the Bottleworks complex, and within a year they moved into their current four-room facility on Hawthorne Avenue. The couple estimates they have hosted 3,000 escape rooms since they opened their doors.

Not everyone gets out. The Brashers say that only 64 percent are deemed “puzzlemasters,” with 36 percent publicly shamed with the label “failed escapes.” Photographs of masters and failures line the walls of a reception area, where gamers arrive and get to know one another, and learn the rules of the game from the room runner, who provides an entertaining introduction to the way the games work.

Andrew Brasher is the room designer, and he starts the process by coming up with a theme for each room. Current rooms include “The Heist,” with its “score of a lifetime”; “Bunk’r,” where teams are locked into a private family bunker; “Snowed In,” perfect for these hot days, with its mysterious briefcase in a frosty ski cabin; and the intrepid students who break in to a lab in search of a test answer key in “BioLab 101.” The room is set up with lots of random objects, most of which serve only as obstacles to locating the real clues, which are revealed in series and require gamers to follow the proper sequence. And these aren’t leisurely problem-solving exercises: If a team doesn’t break out within the allotted hour, they become a “failed escape,” and their photos are posted on the appropriate wall.

Brasher creates a complex web of intertwining clues and puzzles for the escapees, who break into different teams to solve puzzles that will ultimately help the entire group escape. For our escape, the first part was an intense search for small items with colored labels that will ultimately lead to other clues to help solve new puzzles. Others work out cryptexts and decode puzzles using a Mexican cypher to perform various functions that lead to the escape.

He also adds other obstacles, probably with a certain amount of glee, that produce groaning “duh!” moments among the gamers. No spoilers here, though.

At the end, the various teams are reunited to work out specific puzzles that lead directly to the escape. With time running out, these final minutes can become harrowing.

Brasher’s goal is providing “an alternative to everyday life, as an opportunity to experience a heist that otherwise [customers] would only encounter in a movie.”

Since the company opened, it has attracted a loyal fan base among young adults, families, classes and other groups. The Brashers never run the same room twice, and steady customers come back when a new room is introduced. For instance, Brasher is retiring “The Heist” in July.

Some “failed escapes” come back to see if they can successfully escape a room. Brasher says that “a group of highly educated professionals, including a doctor, a lawyer and a professor, returned to play four times” and still couldn’t make it out of the room.

One estimate suggests that there are about 8,000 escape rooms around the world. The trend falls neatly into a larger trending phenomenon called the “experience economy,” with companies providing neatly organized, full-fledged events for parents or young adults seeking entertainment.

Meanwhile, readers of this column will be relieved to learn that your trusty Day Tripper and his friends made it out before the hour elapsed. The successful escape was thanks largely to a strong assist from the band of enthusiastic, and far more talented, young gamers with whom we shared the experience. We got out with only a minute and a half to spare. With all the loot.