Get Into a Fine Mess at Harlem’s Laurel & Hardy Museum 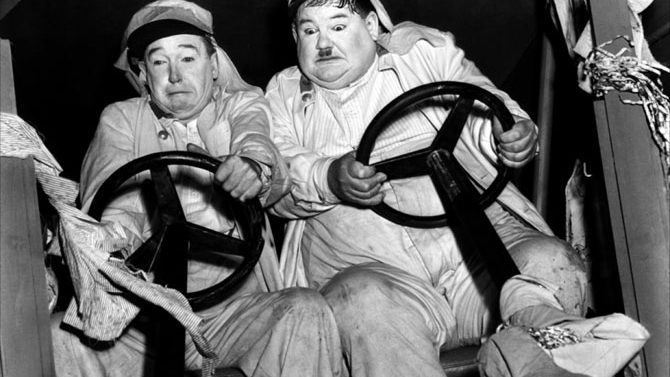 Editor’s note: We love Athens, but it’s summertime, and everybody feels the urge to get out of town every once in a while. Day Tripper will be your guide for destinations within a couple hours’ drive when that wanderlust hits.

One series of fun destinations that will be sure to bring a smile to your face lies just east of here, for an easy one-day trip. You’ll visit two museums with exhibits dedicated to outstanding American entertainers of the 20th Century: comedians Laurel and Hardy and the Godfather of Soul, James Brown.

Getting There: Starting out from Athens, head east on Highway 78, pointing toward Harlem, GA, birthplace of Oliver Hardy, the rotund half of Laurel and Hardy. If it’s a Saturday, as it was for our trip, you may want to stop at the eclectic Rowdy Rooster in Lexington, about 20 minutes east of Athens, to pick up delicious pastries delivered fresh on Saturdays from a bakery in Comer. Watch for a piece on Lexington in an upcoming feature here.

Restored with plenty of sugar, we hit the road again, speeding over hills and down dales fast enough to give an edge to the trip. Out of the way, bub, we have places to go!

What You’ll See: The first stop is the Laurel & Hardy Museum of Harlem, a city-owned museum only 78 miles east of Athens. It boasts a deep collection of memorabilia celebrating one of the most famous comedy duos in entertainment. Hal Roach, who also made the Our Gang movies, produced more than 100 Laurel and Hardy short and feature films during Hollywood’s golden age of comedy.

Active from 1927–1950, Laurel and Hardy were loved for their antic physical comedy and the way they tweaked the pretensions of the upper class. Stan Laurel was the skinny nitwit with the silly grin and the trademark “from above” head scratch; Hardy was the fat, impatient one who loved Stan on good days but mostly liked to roll his eyes, often directly at the camera, at Laurel’s inane remarks. The movies follow a strict narrative, starting out with the pair trading mild pleasantries and quickly devolving with the introduction of a seemingly innocuous plot device. Lots of puns, physical comedy and pratfalls give the films their timeless appeal.

The museum exhibits more than 1,000 photos, figures, plates, souvenirs and other memorabilia from their career. You can have your picture taken sitting in the back seat of their car wearing one of their signature bowler hats or posing with cardboard cutouts of “the boys.” The museum also has a viewing room where you can watch dozens of their movies on DVD. We watched a 20-minute Depression-era classic from 1933 called Me and My Pal, a classic short about Oliver getting married to the daughter of Peter Cucumber, an oil magnate. The story quickly goes sideways when Stan, the best man, arrives with his boneheaded wedding present: a jigsaw puzzle. Stan immediately becomes engrossed in the puzzle and ignores efforts by Oliver to get him to the wedding, and soon new characters are added to the effort. As always, the story goes terribly and hilariously wrong, climaxing with a melee that results in broken furniture, ruined fancy clothes and a noisy visit from the police.

Unsurprisingly, given his “little tramp” appearance, the English actor Laurel served as Charlie Chaplin’s understudy, and he began to act in films on his own as well. Hardy was the Tin Man in the 1925 film version of The Wizard of Oz, 14 years before the 1939 musical version, as well as in other silent films. Their first film as a duo, 1927’s Lucky Dog, was silent, but the rest of them were all “talkies.” They won an Academy Award for their 1932 film The Music Box, the first Oscar to be awarded to a live-action short film, and Laurel was given an honorary Oscar in 1960.

Like many Hollywood figures, the famous duo continues to entertain fans around the world nearly 100 years after their first film. Thousands of fans are members of more than 350 “Sons of the Desert” fan clubs, each chapter named for a Laurel and Hardy picture.

Next Up: The James Brown exhibit at the Augusta History Museum.