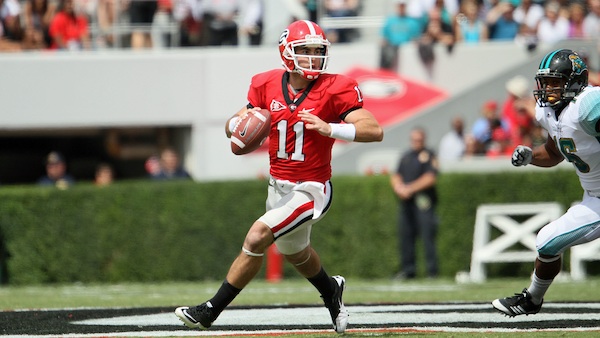 The winningest quarterback in Georgia Bulldog history was taken by the Chiefs in the fifth round of the NFL draft Sunday.

Murray’s stock may have fallen due to a torn knee ligament he suffered last season, but he’ll have time to recover with Kansas City. According to NBC sports:

Murray looks like a good fit for Chiefs coach Andy Reid’s offense, and Reid will likely give Murray a year to develop and rehab his knee behind starting quarterback Alex Smith. If Murray shows promise, he could become a starter in 2015.

Smith will be a free agent after next season, and the Chiefs like Murray even though he’s on the small side for an NFL quarterback, general manager John Dorsey told ESPN.

“He’s a winner,” Dorsey said. “He’s been a winner at every stage that he’s played between high school and college. [He’s] ultracompetitive and smart. What I like about him is when there are big drives to be made late in the game, this guy made those drives. He didn’t always win them, but he made those big drives at the end when it really counted. If you want to put some statistics in there, he’s got multiple records in the SEC, which is as good a conference as there is in today’s football. He performed at a very high level.”

Athens Power Rankings for the Week of May 12