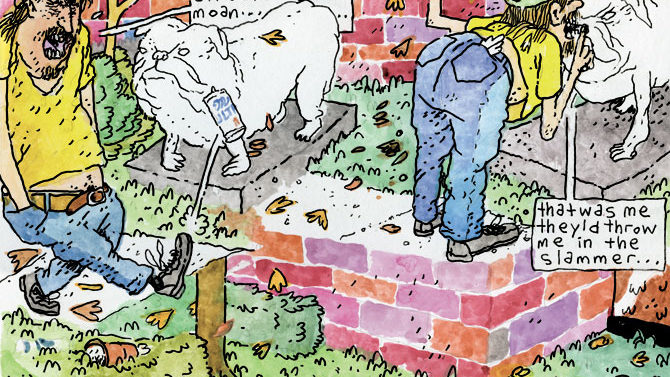 Editor’s note: Thanks to all who submitted scary stories to this year’s contest—especially the many young writers from Clarke Middle School! Read lots more of this year’s submissions here. Below, enjoy our three favorite entries:

Night of The Living Deadlines
By Philip Weinrich

It was nearly midnight, and Pete and the rest of the staff were desperately trying to put the 30th anniversary edition of the Flagpole to bed. The radio had been reporting strange activities caused by radiation following the explosion of a Venus probe, and everyone was on edge.

Suddenly, they heard a low moaning coming from Prince Avenue. Blake looked out the window and said, “Pete, you need to come see this!” Pete peered into the gloom, only to see column after column of old stories lumbering toward them. “What are those?”

“I was afraid this might happen,” Pete said as he turned away from the window. “Its 30 years’ worth of articles trying to get into the anniversary issue. If we let them in here, we’ll never get away from the Classic City live!”

They boarded the windows and doors with whatever was available. Alicia came up from the cellar with a few rifles. “I found these downstairs. Think they’ll work?”

She tossed one to Blake. “Only one way to find out,” he said.

He pushed the barrel through a window and shot “Ghost Fry” and “Ralph Nader Believes in You” right in the third paragraph. They stumbled backward, then lurched forward again. “Why won’t they stop?” Blake screamed.

“These are the unread,” Pete explained. “You can’t shoot them in the body. You have to hit them in the headlines. That’s all most people read, anyway.”

Blake took aim again, only this time he shot “From Scrapple to Cheese Steak” right in the “to.” It went down like a sack of potatoes.

“What’s that one say?” Pete asked.

“‘Rock Is Dead. Who Killed It?’ From the second issue,” Blake answered. POW! It slumped over. “Looks like Alicia did.”

The stories kept mindlessly coming toward the house. POW! “That oughta cure Migraine Boy,” Pete chuckled. POW! “Here’s your Reality Check!” POW! “How ’bout Them Apples!” He was starting to enjoy this.

Drew saw a hoard of Movie Dope reviews circling the back. “There’s too many of them. I’m going to try to get the delivery truck so we can escape!” Grabbing a branch from the fireplace, he swung it at the stories as he ran to the truck. They recoiled in fear of getting torched. “This is surreal,” Drew said as he got in. “Its like we’re in a movie.” He was almost to the porch when he ran over the Georgia Theatre fire story and the truck burst into flames.

Pete lined several up in his sights and took out “A Scientific Fact,” “Edge of Tomorrow” and “This Modern World” with a single shot, but they just kept coming. Alicia screamed as “Man-gifts and What They Mean” pulled her through a window.

As Blake rushed to save her, Pete yelled “Don’t, you city dope!” but it was too late. Blake was already being devoured by “Nickel Creek: Adorable.”

Pete realized his only hope of survival was to barricade himself in the cellar. He reluctantly took out a few Pub Notes as they burst through the front door, then ran downstairs.

As he bolted the cellar door, Pete failed to see a small, square-shaped shadow come up behind him. Hearing a noise, he turned, but too late: A masonry trowel was raised, then came down into his chest again and again and again. Pete slumped against the wall, blood pooling in his mouth and dripping down his chin. The last words he ever heard were,

“I used to eat bwead

It was 20 minutes after last call as Dave and I stumbled out of Boar’s Head and glanced around the street. Halloween enthusiasm still seemed to glow as boisterous co-eds trickled onto the streets of downtown Athens. Somewhere in the haze of my head, I registered the sound of jingling car keys and managed to get a hand on Dave’s shoulder.

“I don’t know about that, man… you had even more than I did.”

“Aw, c’mon, we have to get home somehow. Ya wanna walk to the Eastside? I been worse    before… now, where did I park?” Dave swiveled his head and listed slightly from side to side. Both of us happened to notice the cop car suggestively waiting near the parking deck. I glanced at the officer inside, who gave a slight shake of his head as if to warn, Not today, boys.

Dave looked back at me as I scrolled through my Uber app. “So, what’s your plan B, Lenny?” he prodded. “How are those Uber rates looking on Halloween night?”

“Shit, man… we might as well find a hotel at these surge prices.” We wandered along for a moment and almost tripped over the black wheels of a Bird scooter.

I hesitated before managing an answer around my thick tongue. “Honestly, those things always kind of made me nervous. Give me the creeps. And were these even here a second ago? I don’t know.”

Dave laughed derisively. “The creeps? We should’ve cut you off a few drinks back! Worried you’ll skin your wittle elbow? Besides, unless you have another method of getting home…”

Reluctantly, I let Dave show me how to download the app and get the scooter operational, and we rode off through the darkness. We saw several other post-celebration riders about, some wavering and weaving slightly. I could’ve sworn a scooter went gliding by without any operator riding. Must have just been a kid in a dark costume. Maybe…

“Wow, this thing practically drives itself,” I observed out loud. The scooter seemed to grunt, almost as if agreeing. I noticed it seemed to be picking up some speed, and tried to gather my surroundings. “Dave, do you think we should’ve maybe turned left back there?” I turned toward my companion.

Dave was gone. And the scooter was hurtling forward through the blackness. Suddenly feeling sober, I realized I had no control over it anymore, but it seemed to be heading back toward downtown somehow. I wanted to jump off but couldn’t. The Bird was going too fast, and there was nowhere safe to land if I tried to jump. The scooter swerved, skidded and suddenly stopped, propelling me forward onto the sidewalk.

As I lifted my head, I realized I was on the steps of City Hall. And there they were. The Birds. Red lights glowing, they lined the streets and took up every space on the staircase. I got to my feet, shakily. Near the curb was Dave, lying in a thick pool of something dark. I turned around, almost hoping I might again see the cop we had noticed earlier. The other side of the street was filled with more Birds, dozens of them, covering the sidewalk, vibrating softly. With a maniacal sense of irony, I thought how the Uber might have been worth it after all. But as I heard the rushing sound of wheels whirring from all sides, I knew it was too late.

The Perfect Costume
By Adam Rainville

I am going to outdo her this year. There’s no possible way she can beat me again.

Standing naked in the closet, I run my hand over blouses on hangers, perfectly folded slacks, rows of shoes resting on their racks as I decide what to wear. It has to be the perfect outfit. I slip on a fresh pair of underwear and pick out a dress, low cut and high-hemmed, like she’d wear to one of her hoity-toity soirees.

It’s been years now that my neighbor Diane and I have been having these stupid “competitions.” I’d arrive to a potluck with plate full of meticulously chosen cheeses and exotic dried meats; she’d arrive just after me with a roast she’d spent five hours preparing. There was nothing left of it when the night ended.

I’d show up to the neighborhood’s White Elephant Christmas party with a box of fun novelties from Junkman’s; she’d brought a wrapped, framed copy of the subdivision’s land survey map dating back to the mid 1900’s. Everyone spent the evening trying to steal it from one another.

I’d longed for a family of my own; she’d found the perfect husband and had two beautiful children.

I can’t prove it, but it seems as if she’s always actively tried to one-up me.

But not this year. I open the jewelry box and pick out a necklace and matching set of earrings. They look like the ones she wore to the opening night of our friend’s art exhibit at the Lyndon House. Everyone oohed and ahhed over them, asked her where she found them. She was the center of attention. No one noticed me in my gaudy costume jewelry.

Never is the competition more heated than the night of the Rumpus. Damn her, she knew how much I love Halloween, but somehow her costumes were always better than mine. The year of the Theatre fire, she’d dressed up as the venue in all of its glory. The marquee on her chest even lit up, tiny letters spelling out the words “I will rise again!” Everyone loved it. I’d tried my hardest to be original. Dressed up as the double-barreled cannon, but people just spent the evening asking me what I was supposed to be and why I had wagon wheels pasted to my elbows.

I look into the broken mirror and do my hair to look just like hers. I use her colors to make my face: her lipstick on my lips, her eyeshadow on my eyelids, her blush on my cheeks. Slowly, I become Diane. I practice her condescending smile until I get it just right. No one will ask me who I’m supposed to be this year.

Since it’s Halloween, I dab blood from the corner of the vanity and smear it down my face, from my temple to my throat, so now I look just like her. Scary.

I hear the school bus creeping up the street and realize it’s time to get going.

I make my way to the window in the kitchen and brush the jewels of broken glass off the sill so I don’t cut myself again trying to climb out.

On the walk across her back yard to my house, I think to myself, Diane can’t show me up this year. This year I’ll be the center of attention. Soon they’ll forget all about her. It’s going to be the best Halloween ever.