Some Cool Things My Cats Did Today 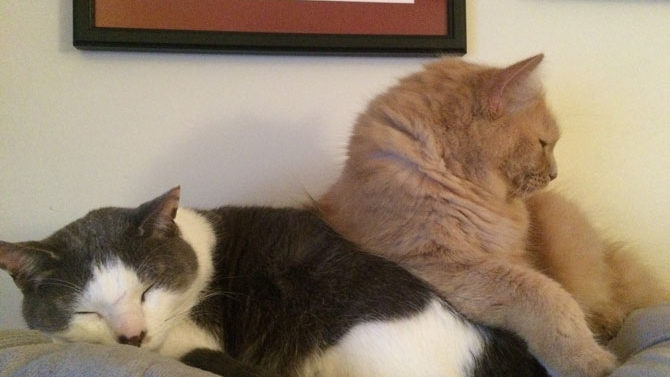 My wife and I have two indoor cats. Lemme tell you: As pets, cats are great. Low maintenance, high entertainment value. But certain members of Flagpole’s staff didn’t think cats were interesting enough to merit a separate story in our first-ever Pet Issue. They goaded me: Don’t they just sleep and eat? What else do they do?

So, haters, here are some cool things my cats did today.

PRACTICED MATRIX JUMPS: Indoor cats need to burn off all that energy they’d otherwise spend chasing birds and other unsuspecting small animals outside, so for an hour or so each day they basically just run from one end of the house to the other a bunch of times. Once in awhile their paths will converge unexpectedly, and they’ll both jump straight up into the air, creating a bullet-time effect that looks really hilarious and cool.

MADE BIRD NOISES: My cats spend a ton of time looking out the window, so the bird bath we put in our front yard was as much about feline entertainment as avian hydration. Cats make this bizarre noise when they see birds. It’s a trill-type sound that’s pretty cute and funny. Supposedly they’re trying to mimic a bird call in an attempt to lure the bird their way, but it doesn’t sound like a bird at all. Plus, there’s a window there. Dummies.

FORGOT THERE WAS ANOTHER CAT IN THE HOUSE: So funny. My cats forget about one another all the time, and then they freak out when they catch a glimpse of fur in another room. Their tails get all bushy and they creep slowly down the hall, until something clicks in their walnut-sized brains. “Oh, I know that dude.” DUMMIES.

STARED INTENTLY ACROSS THE ROOM LATE AT NIGHT: Cats are also creepy. I cannot deny this. Sometimes, usually late at night, I’ll be reading or watching TV or hate-checking Twitter and one of our cats will suddenly wake up from one of his million naps and start staring over my shoulder across the room with a calm but terrifying intensity. Of course, there’s nothing there—that I can see, at least. Cool it, cat. You’re freaking me out.

WATCHED TV FOR A SPELL: I am serious. I don’t know if all cats do this or if we just happened to adopt a couple of savants (probably the latter!), but our cats will occasionally notice the picture on the tube and start watching. It happens most often with nature shows and sports—especially sports that feature small, round balls, like golf and baseball. They get sucked way into the action and we literally have to intervene to get them to stop watching. Wastoids.

ENJOYED CLEANING/CUDDLE TIME: Some cats don’t like each other. Thankfully, our two guys at least tolerate each other most of the time. Maybe once a night they’ll decide they wanna be really sweet and start cuddling together and giving each other kitty baths. It’s adorable and life-affirming. This brings up another great point: Cats are clean. As a human, you don’t have to clean them. They take care of it themselves. That’s cool.

TRAPPED A BUG: This is probably the best argument in favor of having a cat (aside from, I dunno, everything I’ve mentioned so far): They’re terrific critter-catchers. When cockroach season rolls around, they are on the job. Although this particular asset can be sort of creepy, too, particularly when you realize your cat’s been sitting in the corner staring at your shoe for 15 solid minutes. You gotta upend that shoe and squash that bug, my man.