The Ragged Garden: Reflections on a Long, Hot Summer 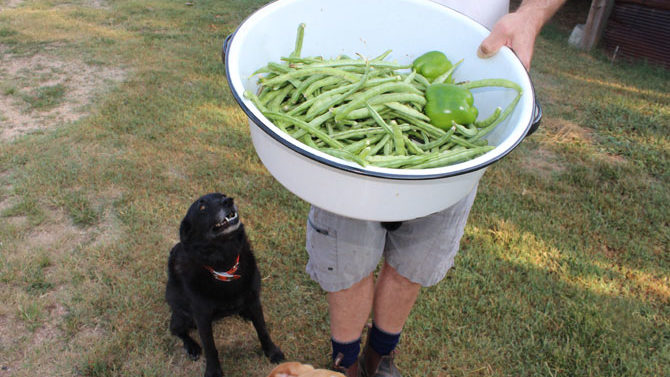 July 31, 2015: It must be summer. We have a giant moon, the second of the month, rising full over the neighbor’s barn, and the racket of the pulsing cicadas is deafening as we all try to breathe in the evening air. It’s been so hot, we have given up the garden on our Piedmont farm, after seven months of care and effort. 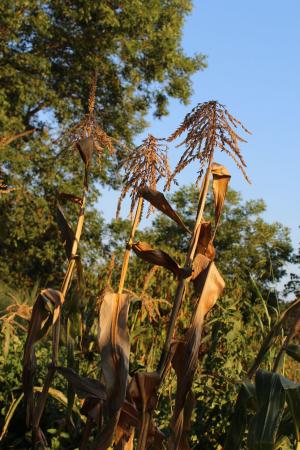 The corn has given up the ghost.

This could be a depressing moment in the calendar year, especially if we subscribed to Southern Living or Fine Gardening or some other impossibly perfectionist rag that shows readers only unattainable landscapes of flawless control. But we love our ragged garden just the way it is, and we will go down with Montaigne “planting cabbages…” or something like that.

How else do we know it’s full summer? One clear sign is that the laundry we put on the line to dry in the afternoon sun bursts into flames after an hour or so. Other indicators: There’s a three-foot black racer under the kitchen table enjoying the cool of the linoleum tiles; the last seven barn swallows departed yesterday; and the dogs look dead in the yard, lying in motionless heaps in the curve of the gravel drive. When the morning sun encroaches on their shade created by the ancient boxwoods, they can’t even bother to move. We check their pulses. They are fine but stoned into oblivion by the July light. The racer is unimpressed by our attempts to shoo her out the door, and she’s not the only reptile in our lives who refuses to budge. Scary Snake, down at the pond, lies stretched out on the earthen dam in her “come hither” repose, thick and somnolent from her week of bullfrog binge-eating. She’s only a banded water snake but looks like she could eat your grandmother. At the pond, too, dragonflies the size of small bats land on the points of the flag iris blades. (Let’s learn to do that.) Blue-tailed skinks scurry on the granite steps; the June bugs and wasps and yellow jackets consume the ripening figs at the corner of the house. On this topic, as well, we could get angry, but there is enough to go around. There always is. 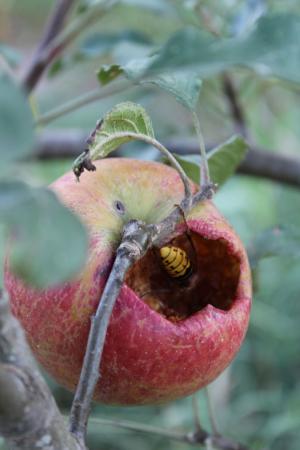 A hornet enjoys an apple.

Gazing out on the half-acre garden, we are reminded of the great aunt who “let herself go.” Tall, burned-up corn is giving in to gravity, drained of color. The strident morning glories are way too purple for proper-lady attire, and the tomatoes we were just too tired to pick this morning have burst on the vine, a hopeless mess of muck. The Japanese beetles are having their way with the apples, and the squash vines look like a science experiment gone wrong.

We know there are some high achievers out there. You probably read magazines about year-round gardening (heaven help us) and are already planning a fall garden. But us? We sit back with an affordable bottle of bourbon and some blessed ice cubes in an old white enamel cup and watch the sun move from the cedars to the farthest pines on the back pasture—the pasture where the dogs say the cow patties are the most succulent this time of year—and drink in the cacophony of the cicadas, tree frogs and katydids. The insects start at 7:30 a.m. or so; you can imagine just how productive we are at the end of July. Meanwhile Preacher, our neighbor’s black-and-tan, holds forth on yet another sermon on the Book of Job, outdoing even the coyotes in their histrionics.

The house is a wreck. Hundreds of pounds of produce cover every surface: tomatoes all over the kitchen counter and dining tables; potatoes on the writing desk; sprays of drying herbs cover the bookshelves. In the night, we curse as we trip over baskets of field peas waiting to be shelled, and the yellow squashes glow in the dark of the bathtub, the only place left that is cool enough to store them. (The refrigerator is long past use; we stopped opening the door in late June for fear we might find yet another head of unsold broccoli.) 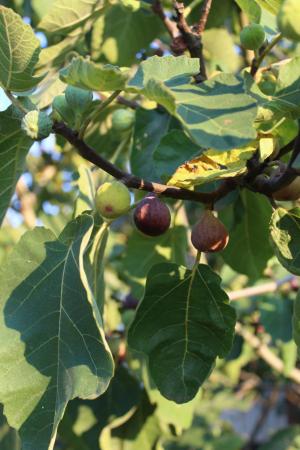 The figs attracted everybody.

Flower-wise, there’s still a lot to celebrate, but we do it from a safe distance: Cosmos is a riot of orange and yellow; butterfly weed is showing off its brilliant orange like something radioactive which then comes alive as the hundreds of tiny butterflies all take flight at the same time. The heliotrope with its bluish-indigo blossoms refuses to give in, while the horse mint, Joe Pye and goldenrod remind us once again that where we live in Georgia there is always a garden, even where there isn’t. The buckeye seed pods are cracking open, dropping the shiny mahogany seeds we pocket for good luck, and the sumac (Is there anything more beautiful than wine-red sumac seed heads nodding over the tall spikes of the Indian grass and brilliant yellow goldenrod?) is reaching for the hot, blue sky on the power-line cut

In our sixth decade of life, we have felt a great mellowing of the gardening instinct, a kind of maturity, or exhaustion, growing in us that says, “This is not your own. You may participate, work hard starting seeds in January, carry the seedlings in and out of the house to save them from late frosts. You may use your precious well water for a while to nurture their growth, and you may even share the bounty with friends and family, but all of this belongs to me, Mother Nature.” And she is not a sentimental fool who plants things in rows and tries to control what does not need to be controlled.

We will spend August harvesting more tomatoes, the poblanos, the watermelons and the knuckle peas that just keep on giving, even when everything else has thrown in the towel. And then we will finish that bottle and return to the screened porch for a long nap under the fan.