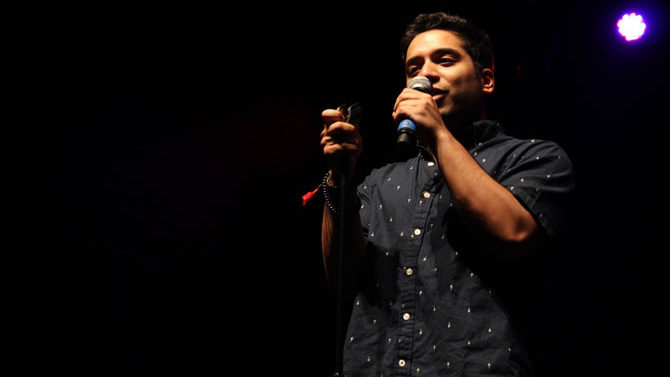 At the most recent edition of Casual Comedy, a monthly comedy showcase at Hendershot’s Coffee Bar, guest host Shaunak Godkhindi was confronted by the natural enemy of the stand-up comedian: hecklaris intoxicatus—the heckler.

During his opening set, an audience member responded rather combatively to one of his set-ups. Godkhindi’s strategy for dealing with the heckler was sound: He invited her onstage to speak into the microphone, presuming she would quiet down out of embarrassment. Instead, she responded as if she had been waiting for the invitation all night, practically sprinting to the stage and grabbing the microphone out of his hand. In no time at all, she was relating a story about being trapped on a small airplane with her family during a bout of explosive diarrhea.

“I don’t condone heckling,” says Dave Weiglein, creator and regular host of Casual Comedy. “I don’t think it’s cool. But it’s part of [comedy], and every comedian needs to know how to handle it. It can lead to some of the biggest laughs of the set.”

Weiglein created Casual Comedy in fall 2013, having begun performing two years earlier. A longtime Athens musician, he used the breakup of his band (Nutria, which also featured current Drive-By Trucker Jay Gonzalez) as an impetus to try stand-up, an art form he had long admired. Luckily, he found a venue willing to let him create his own show.

“A lot of people end up starting their own shows, because it gives you guaranteed stage time,” says Weiglein. “You get more practice that way, and you get to network with a lot of comics. A friend of mine’s brother was working at Hendershot’s when they moved over to Bottleworks. I knew it would be a good venue for comedy, because it’s just set up well. I talked to the venue [and] told them what I wanted to do. They were very supportive.”

Alia Ghosheh, who hosts the Comic Strip comedy show at Office Lounge in Homewood Hills, likewise landed that gig with the help of a friend. In her case, it was Athens comedian Cindy Spice, who hosted Comic Strip upstairs at the Globe before moving to North Carolina in fall 2014. Spice encouraged Ghosheh to go through with her very first stand-up performance. It went well, and Ghosheh began regularly attending Comic Strip, both to perform and to take photographs.

Ghosheh has hosted Comic Strip since September 2014. Though the show is now at Office Lounge, the Aug. 8 edition will occur at the 40 Watt Club and will be headlined by Atlanta comedy team A Jew and A Black Guy.

According to Ghosheh, Athens is a great place for up-and-coming comedians who want to host their own shows.

The June 30 edition of Casual Comedy bore this out. Weiglein curates each month’s lineup from his ever-expanding pool of Athens- and Atlanta-based comedian friends. All three Athens comedians who performed on the 30th have local hosting gigs of their own.

This level of engagement from local comedians speaks to a very lively, if still under-the-radar, comedy scene happening in the Classic City, says Shaunak Godkhindi.

“It’s flourishing. There’s a lot of hungry young people doing it, and a lot of stuff going on right now. It’s a force to be reckoned with.”

Casual Comedy occurs the final Tuesday of each month at Hendershot’s Coffee Bar. The next installment is July 28. Open TOAD occurs at Flicker on the first and third Tuesdays of each month. Comic Strip occurs one Monday per month (Gosheh schedules around the other local shows). Jerzees Comedy Night occurs on the second and fourth Tuesdays of each month. Wallflowers Comedy Show and The Good Stuff occur once a month on varying dates; check the Flagpole Calendar.