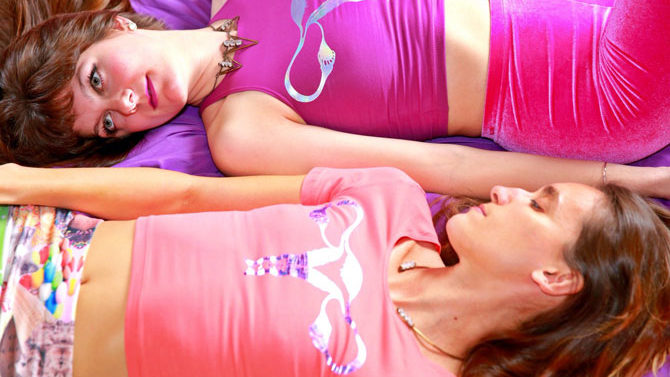 Local designer Prosper Hedges has taken the fashion statement to the next level.

That statement is Tinkypuss, a new socially conscious fashion line that donates a portion of its proceeds to women’s charities. The first collection, which benefits reproductive health, is GLITTEROUS, a limited edition batch of crop tops and t-shirts emblazoned with a holographic image of the female reproductive system.

These holographic uteri reflect Hedges herself, from her stance on feminism to her personal interests. Hedges has long been passionate about fashion, as well as movements that engage young women and celebrate them as a demographic, such as Rookie magazine. She’s also been motivated by watching too many women who are scared to say the things they want to say, whether they’re apologetic about their youth or the implications of their gender. Hedges believes that youth is a foundation of strength, and Tinkypuss aims to celebrate it. She sees the line as a non-abrasive opportunity to decrease shame of the female body and female anatomy. In short, Tinkypuss makes feminism accessible.

“I think there is a lot of shame associated with specifically this image, and I think bringing it out of the shadows and pointing out that is it something beautiful is hopefully a message that resonates with a lot of people,” Hedges says. By making the image fashionable, Tinkypuss makes being a woman a point of pride.

With GLITTEROUS, the design came first. After graduating from the University of Georgia in December 2013, Hedges started working at Satisfactory Design & Printing, where she felt pulled to screen-print herself. Hedges had wanted to partner with women’s organizations for a long time and realized that her design fit the cause. A portion of the proceeds from the GLITTEROUS line benefits the Georgia Reproductive Justice Access Network (GRJAN), which provides abortion funding, access and transportation to women in rural areas.

“I’ve been amazed and saddened by the lack of access to abortion [to those] who are really, severely in need [in] this state,” Hedges says. “There’s one abortion provider for every 200,000 women, which is insane. If you can’t afford an abortion, you certainly can’t afford to raise a child.” Most of these providers are in Atlanta, and the women who really need it are nowhere nearby. There’s an extreme need for abortion services in the places that are the farthest from them.

“It’s been a little bit scary to align myself with something that is so polarizing, especially in Georgia,” Hedges says. “As I became more and more nervous, I realized that that meant it was even more important for me to align myself with this. If somebody doesn’t like that, then they’re not gonna like Tinkypuss anyway.”

Despite embracing a controversial message—or perhaps because of it—Tinkypuss has been greeted with a wave of support. GRJAN is promoting the shirts as well, and Hedges’ peers are incredibly encouraging and resourceful. Contributions from her friends and boyfriend include modeling in Tinkypuss photo shoots and helping out with advanced screen-printing techniques.

Because Tinkypuss operates on an evolving business model, Hedges is open to collaborating with other artists and charities, and she looks forward to partnering with grassroots organizations. In the future, she’d like to collaborate with education-oriented organizations, female farming operations and groups that provide support for women who struggle with sexually transmitted diseases and urinary tract infections. She’s also open to partnering with other reproductive justice organizations, like Women on Waves and Women Help Women.

In the future, Hedges will likely change Tinkypuss up. After a few rounds of limited-edition batches, she wants to do pop-up stores and partner with boutiques—preferably in Atlanta—and nonprofit events. Garment-wise, she is considering printing the design on dresses, underwear and shorts.

“I’m lucky enough to have an extremely responsive audience, and they’ve been really vocal in telling me what they like and what they’re interested in,” Hedges says. Provided the GLITTEROUS batches don’t sell out, Tinkypuss will stop taking sales on Saturday, Apr. 18 in anticipation of GRJAN’s third-annual National Abortion Access Bowl-a-Thon, which will be held on Sunday, Apr. 19 at Midtown Bowl in Atlanta.