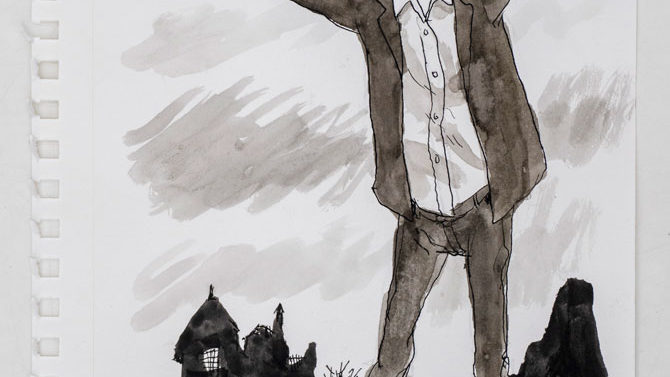 Editor’s note: Hillary Brown is a longtime Flagpole contributor who also serves as director of communications at the Georgia Museum of Art.

I moved to Athens in 1996 to go to school, and one of the things that defines those early years in this town for me is Patrick Dean’s art, which started running in Flagpole the following year. Raised on Creative Loafing in Atlanta, I gravitated quickly to Flagpole, and although it took me years to grasp its insider’s view of local politics, at least I sort of got the cartoons. Sometimes the strip didn’t make all that much sense, especially when it became a months-long musical with no clear end in sight. No matter. It was still fun to read, something I looked forward to in every issue.

Later, I started going to Fluke, the comics and zine fest that Patrick organized with his friend Robert Newsome. There, I bought some of his original works on chipboard colored with marker, framed them, hung them and moved them from house to house. I realized how much I loved comics and started writing about them regularly.

I got to know Patrick in 2012, when the Georgia Museum of Art asked him to serve as guest curator for the exhibition “Beyond the Bulldog: Jack Davis.” I knew Patrick was a fan of Davis’ work and could see the clear influence, but he really dug in and made it an excellent show, reaching out to many lenders and selecting incredible original works. He also gave a thoughtful talk on Davis’ career. I kept following his work, including the signs he made at Trader Joe’s, which were as creative and funny and well-drawn as anything else he ever did.

Hearing that he’d been diagnosed with amyotrophic lateral sclerosis—ALS, also known as Lou Gehrig’s Disease—last year made me sad, but more than that, it made me angry. What in the hell kind of universe was this in which someone who was such a contributor to it could receive that generally speedy death sentence? Then, former Flagpole editor Richard Fausett called the museum with a brilliant idea: Why not do a show of Patrick’s work—not to memorialize him, but to celebrate him and what he’s meant to Athens? We bit, and fast. “The Monsters Are Due on Broad Street: Patrick Dean” is on view through Mar. 29—the day after Fluke 2020.

The hardest thing about putting together this exhibition was the limited number of works we could select. Patrick still has the original work for all the covers and strips he did for Flagpole, plus many, many other things. There was no need to borrow from anyone else, but figuring out exactly what could fit in the gallery and still cover as many bases as possible was hard. Patrick and his family were kind enough to allow me into their home and let me go through boxes and folders, snapping terrible reference photos with my phone and monopolizing their very valuable time.

There is so much I would have liked to put in the show that I couldn’t, but it does include student works from his time at UGA: two intaglio prints that feel more like drawings than etchings, crowded with figures and buildings that aren’t quite square, and a color drawing from Monster Opera, his thesis project at UGA, an unpublished children’s book. All three of these provide plenty to look at: a man fighting a crab with a cleaver, a neglected artist’s model, a creepy face in a window, a lovingly but speedily rendered rotating air vent, a Georgian’s view of New York City as a claustrophobic’s nightmare.

There are only two originals of his Flagpole strips included, but Flagpole Production Director Larry Tenner was kind enough to supply a PDF of every single one, which is accessible on an iPad for visitors to flip through. Still, they show how his work changed during the nine years he drew for Flagpole, as well as how it didn’t.

The first one, from October 1997, was a no-brainer, featuring his recurring cowboy character having an art opening, during which he opines, “Ah’s love renderin’ that inner soul of mankind’s sufferin’ transhendental society!!!” Like a lot of Patrick’s jokes, it’s as serious and sincere as it is funny, accurately referring to Egon Schiele, whose knottily rendered hands and feet Patrick echoes in his own work. The other, from July 2006, is both an EC Comics tribute, complete with the size and structure of the panels and the detailed cross-hatching, and, of course, a joke about scamming some free tea. It’s more assured, more complexly shaded and a bit looser, but definitely recognizably from the same brain and hand. A selection of sketchbooks show that brain and hand at work.

The show also includes a large number of Patrick’s Flagpole covers. Featuring downtown Athens, the Twilight Criterium, the Murmur trestle, a bunch of bars, students, townies and tons of monsters, they are funny, joyful and smart. They show what’s changed and what hasn’t—a lot, in both cases.

Finally, it includes two of his most recent works, both from last year and addressing his disease. One of them shows him as Frankenstein’s monster to explain his then-lurching walk sans cane—a particularly good choice, given Davis’ legendary rendering of the same character. It’s important to remember that that monster is assembled from human components. In Mary Shelley’s book, he talks and reasons. Patrick’s always been interested not only in monsters but in the overlap between them and humans. The title of the exhibition refers to an episode of “The Twilight Zone,” “The Monsters Are Due on Maple Street,” in which the monsters turn out to be the humans who already live on that street. In other words, to quote Pogo, “we have met the enemy and he is us.”

That appreciation of our collective monstrousness and humanity, which exist side by side, is part of what makes Patrick’s work great. Come spend some time with these works, and you’ll feel both more clear-eyed about and more forgiving toward your fellow humans.