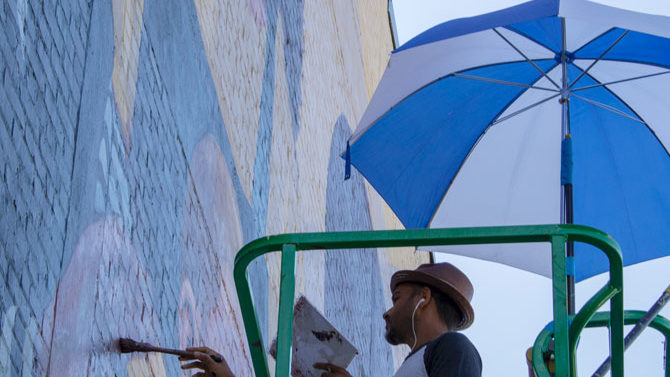 Anyone who has ever attended the annual Hot Corner Celebration, held the second weekend of June at the intersection of Washington and Hull streets, can attest to the incredible cultural contributions this little corner of Athens has provided over the last century. Downtown’s newest mural, “Hot Corner: An Athens Legacy,” pays tribute to the area’s rich history as a locus of African-American entrepreneurship. Organized by the Athens Cultural Affairs Commission, the mural and its correlated outreach programming are supported by a $24,000 budget that includes a $12,000 Art Works grant awarded by the National Endowment for the Arts.

Found through a national call for proposals, Miami-based street artist Elio Mercado caught the eyes of the selection committee through his incredible ability to create meaningful works that strengthen a sense of place. Impressively experienced in the realm of public art and mural projects, Mercado’s painting has led him to beautify and enrich the daily lives of communities across the globe in countries not limited to Mexico, Australia and his home country, the Dominican Republic.

Working under the pseudonym Evoca1—a play on the Spanish word “evocar,” or “to evoke”—Mercado’s photorealistic, figurative style is awe-inspiring, empathetic and powerful. Many of his projects aim to identify the specific values or struggles experienced by a community in order to merge art and social consciousness. His Hot Corner mural aims to evoke pride while amplifying the often silenced African-American voice. In a town whose physical and cultural landscapes are constantly reshaped by rising rental prices, racial inequality and other power imbalances, the mural guarantees that Hot Corner’s history and legacy will not be lost or forgotten by future generations.

Executing a mural of this magnitude was not without its hiccups. On the day Mercado was scheduled to arrive to Athens, preparation of the exterior wall of the Morton Theatre, the original intended site, was halted due to an unforeseen complaint from the adjacent property owner. Working gracefully under the pressure of a disappointing dispute, the ACAC swiftly secured a new wall for the mural: the city-owned Costa Ice Cream building at 140 Washington St., a mere block up the street from the Morton.

Over the course of two weeks, Mercado painted alongside local artist and activist Broderick Flanigan, an Athens native who helped serve as a liaison to community stakeholders. While Mercado guided Flanigan through the process of scaling a mural of this size and magnitude, reflecting an element of mentorship, Flanigan offered invaluable insight into the history and culture of Hot Corner.

“Elio and I worked well together,” says Flanigan. “[He] and I are both passionate about people in less fortunate circumstances, and how we use our art to bring joy and awareness to them in a way that shines light and love on things they can enjoy and identify with. We were able to connect on varying levels, and we may be working with one another again in the future.”

The mural itself is a montage of significant local figures joined by everyday people to portray the vibrancy and beauty of black culture, both past and present. Monroe “Pink” Morton, who constructed the Morton building in 1910, appears above Homer Wilson, owner of Wilson’s His and Hers Styling Shop and founder of the Hot Corner Celebration.

Though they worked long, physically demanding days that seemed to alternate between sizzling sun and torrential rain, the artists’ moods stayed positive in part due to the overwhelming interest, appreciation and joy expressed by passersby.

“The highlight for me was having a little boy drop by and say, ‘That’s me,’ referencing the boy in the chair getting his hair cut depicted in the mural,” says Flanigan.

As the owner of Flanigan’s Portrait Studio and new consulting business Enlightened Media Productions, Flanigan is a natural born entrepreneur who recognizes firsthand the challenges minorities face when attempting to launch businesses. For several years, he has directed his efforts towards elevating the visibility of black entrepreneurs, finding along the way that most roads metaphorically lead back to roots in Hot Corner. Currently, he is working with Alexander Stephens on a new audio documentary that aims to preserve the stories of this special community.

“To have this accompanying mural to add to the legacy of Hot Corner will serve as a visual reminder of what was, and still is, a major part of black history in Athens,” says Flanigan. “In some of the interviews for the documentary, people noted that Hot Corner was a central hub for the black Athenian, where we could let our hair down and be our natural selves, without the pressures and judgments of the world during Jim Crow segregation.”

Flanigan anticipates that the audio documentary will be ready to release by next year’s Hot Corner festival, coinciding with its 20th anniversary.

“The spirit of Hot Corner is still very much alive although many of the buildings and businesses have left,” he continues. “We have a responsibility as a community to make sure these stories such as Hot Corner are preserved and passed on to future generations. Every year on the second Saturday in June, the corner of Hull and Washington [is] teeming with laughter, good food, music, fellowship and love. Connecting the past and present in a seamless thread that is and forever will be Hot Corner.”