Banana Splits and Braided Hair at Tif Sigfrids and Howard’s 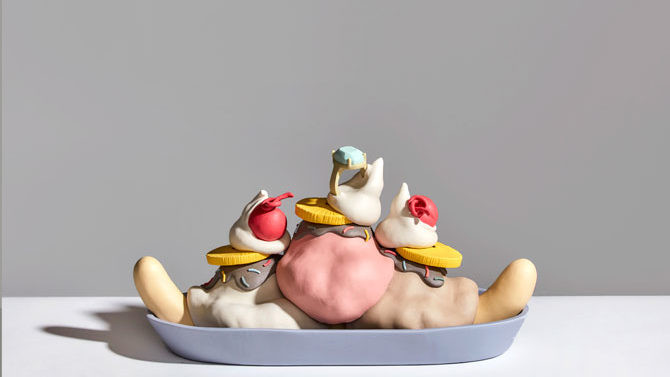 Though still fairly new to Athens, the new galleries Tif Sigfrids and Howard’s are no strangers to the national art scene, and once again, they have delivered exciting works by out-of-state artists. A three-person exhibition at Howard’s brings in pieces by New York-based artists Genesis Belanger, Julie Curtiss and Anthony Iacono, who each transform familiar iconography into something much more alluring with influences of surrealism, pop art and noir sexuality.

After receiving a BFA in fashion design from the Art Institute of Chicago, Belanger moved to New York City and began working as a prop-maker for advertising campaigns. The experience motivated her to pursue sculpture and her MFA at Hunter College, and exposed her to one of her greatest influences: the visual languages used by the advertising industry to manipulate desire. With her background, she’s able to present seemingly mundane objects as lush and delightful.

Belanger’s sole yet strong inclusion at Howard’s is “Wife-bait,” a traditional banana split topped with a gemstone ring sinking into a dollop of whipped cream. Her porcelain and stoneware ceramics are pigmented with pastel colors and appear fluffy and soft, as if slowly melting at room temperature. Influenced by claymation and cartoons, her shapes are slightly exaggerated and uncanny.

Similarly identifying strangeness in the mundane, French artist Curtiss creates illustrative paintings that contemplate femininity and identity through absurd or fantastical details. Her portraits, “Caress” and “Soothe,” both focus on two of her most prevalent motifs: hair and nails. Whether braided or slicked into a style, hair is seen as a signifier of femininity rooted in history and culture, but as soon as a beauty standard is subverted—say, by sprouting up where it’s unwanted—hair often becomes the catalyst of repulsion. Long, brightly colored nails appear extravagant, impractical and not unlike claws. Though invited to come very close to the figure, both faces are turned away from the viewer, suggesting shyness or voyeurism.

In the adjacent gallery room lined with sunny windows, Tif Sigfrids presents “Semifreddo,” a solo exhibition by Los Angeles-based artist Gracie DeVito. A recipient of a BA from Brown University and an MFA from CalArts—and yes, a daughter of Rhea Perlman and Danny DeVito—she alternates between painting, installation and performance in her practice. “Semifreddo” consists of hazy landscapes grown from automatic drawing and wispy brush strokes. Occasionally, a figure appears, best observed from a distance, before sinking back into the splotches of color.

Applied onto what appears to be a thin, gauze-like surface, the layers of paint create an unpredictable, bumpy surface that adds a topographical element. Interestingly, there are no confining straight edges to place parameters around any of the scenes. Instead, the fabric is allowed to dry into whatever irregular squiggle gravity pulls it in. Custom frames hug these wavy borders perfectly, maintaining the only boundary that exists—one between the white walls and the vistas that could otherwise extend forever.

Co-presented by Tif Sigfrids and Howard’s, “Cabin Boy, Auntie Gladyce and Three More” is a collection of unusual portraits by Margot Bergman, a painter who has been active in the Chicago art scene since the late 1950s. Selected by exhibition organizer Adrianne Rubenstein, the works were created between 2002–’12 by repurposing canvases found in thrift stores or flea markets. By allowing the subject matter, color palette and spatial composition of the original scenes to serve as subtle grounding points, it’s as if she worked in collaboration with the anonymous makers behind these discarded pieces of art.

“Lulu,” “Auntie Gladyce” and “Beth Jo” are uncanny portraits of women painted upon other portraits, with little pairs of eyes peering out from in between Bergman’s loose, gesturally painted eyes. The double faces are simultaneously playful and haunting and easily malleable to the viewer’s imagination. It’s possible they could be embodying multiple personas within the same person, representing the recollection of someone’s face or reflecting the viewer’s own gaze.

Located downtown above Jittery Joe’s, the galleries are open on Fridays and Saturdays from 11 a.m.–5 p.m. or by appointment. All three exhibitions will remain on view through Saturday, Mar. 2.