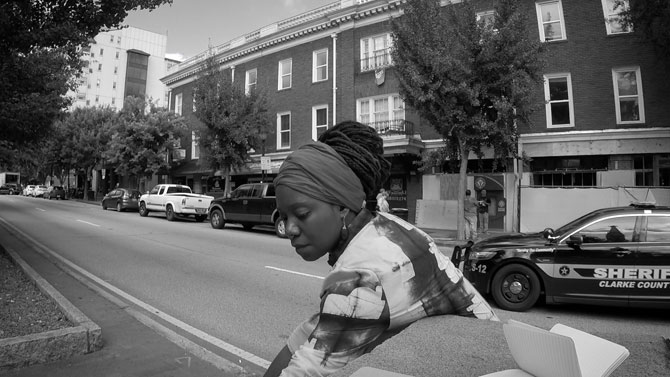 IN THE SHADOW OF DIXIE: All across the South, Confederate monuments serve, to many Americans, as painful reminders of slavery and its legacy. In response, Becci Davis, an interdisciplinary artist and activist currently living in Rhode Island, performed “In the Shadow of Dixie,” a series of interventions at monuments across the state of Georgia in Athens, Augusta, Louisville, Canton, Kennesaw, Decatur, Stone Mountain and Columbus. While in town, she filmed herself writing postcards to local, state and federal politicians—shifting position every so often to remain in the monument’s shadow—and urged each of them to make a public statement on whether or not they support the monument’s removal.

“The existence of these monuments throws into sharp relief the odious lack of official recognition honoring the people whose blood, sweat and toil built our country’s economy and global influence,” says Davis. For the past few years, she has used her artwork as a place for processing research into her own ancestry—an experience that has led to serious reflection on how slavery has directly and indirectly altered the experiences of her and her family members.

Though Davis remained at the Athens monument for nearly seven hours, she was only approached by two people, both of whom asked if she was protesting the monument and seemed supportive of her efforts. To date, she has not yet received any responses from the 23 local and state government officials she has attempted to contact.

“During the research process of this project, it became clear that these and other symbols of white supremacy are in the firm grasp of legislators, not random racists or anonymous Klansmen in sheets,” says Davis, who points out that Georgia monuments are protected by state law. “It is my hope that this project does two things. One is to bring awareness to the history of these monuments and their connection to Jim Crow-era attempts to intimidate black communities and reframe the Confederacy’s reason for secession… The other is to empower citizens to build communities that are inclusive by holding lawmakers accountable for their actions and decisions.”

A multimedia installation incorporating her research, preparation and reflections on “In the Shadow of Dixie” is currently on view at the University of Rhode Island’s Main Gallery, and many of the materials and personal narrative documenting her experiences can be followed at shadowofdixie.wordpress.com.

TRIO GALLERY: Back in June, Pixel & Ink Studio announced the switch from retail hours to an appointment-only system that would allow for more project-based work and a busy schedule of workshops and events. Along with a few further tweaks to services, the shop also recently decided to close Trio Contemporary Art Gallery, located upstairs.

The gallery’s artistic director, Tatiana Veneruso, has been actively working with Pixel & Ink owners Carolyn Crist and Laulea Taylor since the shop’s relocation from the Chase Park warehouses to the former Secret Squirrel building on West Broad Street. Over the course of a year, the gallery hosted a total of nine well-organized and notably inclusive exhibitions that ranged from politically charged works in “Nasty Women Athens” to murals for “In These Streets,” spooky creations in “Specter” and tributes to feline friends in “CatFest.”

Neighboring business Vic’s Vintage will take over the second-floor space this fall to use as a display and selling room. Veneruso, no doubt, will continue elevating arts within the community through her position with the Athens Cultural Affairs Commission. Check pixelandinkstudio.com for updates on upcoming workshops.

HOT CORNER: Another mural is coming to downtown, thanks to a $12,000 grant received by the Athens Cultural Affairs Commission from the National Endowment for the Arts. “Hot Corner: An Athens Legacy,” which will be installed on an exterior wall of the historic Morton Theatre, seeks to celebrate the hub’s legacy of African-American entrepreneurship.

The ACAC is currently seeking feedback, especially from members of the community who have an interest or connection to the block’s history, through an online survey that can be found at athensculturalaffairs.org. These comments will be considered while evaluating proposals received through a national call for artists within the coming months.

WILD RUMPUS: The Wild Rumpus Parade & Spectacle was one of 16 projects selected from across the state to receive a grant this past month from the Georgia Department of Economic Development’s tourism division. The $10,000 award will be applied towards compensating the artists and musicians who contribute to the two-day festival’s revelry and chaos.

Slated for Oct. 26–27, the Wild Rumpus is celebrating its 10th anniversary this year with a kid-friendly Monster Mash in the afternoon and kickoff party with Unknown Hinson on Friday night at The Foundry. Saturday’s parade through downtown will be preceded by an early-morning Monster Dash 5K Race and Fun Run for Kids and a twilight-hour Rumpus Rally with Partials and Monsoon, both at Creature Comforts, then followed by a Royal Rumpus Ball with the Ladies of LCD Soundsystem and Linqua Franqa at the Georgia Theatre. Visit wildrumpus.org for event details.