To Infinity and Beyond: ‘The Golden Record’ at ATHICA 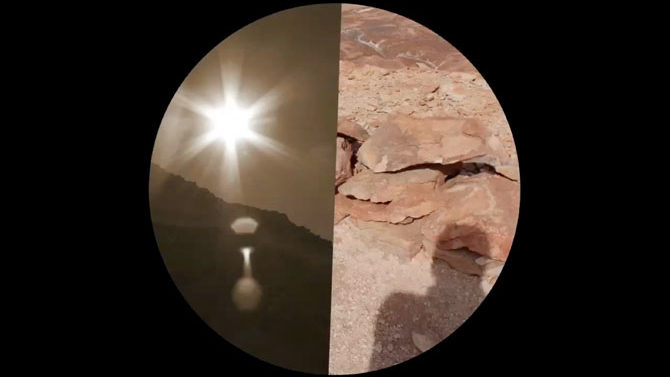 Facing the inevitable sale of its gallery space within the revitalized Chase Park warehouses, the Athens Institute of Contemporary Art made the bold decision to relocate this summer. After 16 years of operating off of Tracy Street, ATHICA lucked out in finding an affordable suite inside of the historic Leathers Building at 675 Pulaski St. Secured with a multiple-year lease and the option to purchase, the gallery is all set to organize exhibitions of contemporary artwork by both professional and emerging artists for years to come.

ATHICA officially opened the doors to its new home last Saturday for the opening reception of “The Golden Record: Far Beyond Our Galaxy.” Curated by exhibitions committee members Rebecca Brantley, Brooke Leeton, Paula Runyon and Jon Vogt, the inaugural group show was inspired by the Golden Record, a phonograph compilation containing over 100 images and sounds that have been traveling through the cosmos aboard two Voyager space probes for the past four decades.

A committee chaired by Carl Sagan of Cornell University assembled the time capsule for NASA in 1977, intending to convey an impression of Earth’s unique minutia to any extraterrestrials who might intercept the spacecraft. Images such as a woman breastfeeding, cars sitting in rush hour traffic and an astronaut floating in space are combined with sounds like heartbeats, morse code and birds chirping for a sample of the human experience. In addition to greetings in 55 different languages that have emerged over the past 6,000 years, a 90-minute playlist features eclectic recordings from across the globe, like a night chant by Navajo Indians, a wedding song from Peru and “Johnny B. Goode” by Chuck Berry.

An official statement by President Jimmy Carter was placed on the Voyager to say, “This is a present from a small distant world, a token of our sounds, our science, our images, our music, our thoughts, and our feelings. We are attempting to survive our time so we may live into yours. We hope some day, having solved the problems we face, to join a community of galactic civilizations. This record represents our hope and our determination and our goodwill in a vast and awesome universe.”

Reflecting the multimedia approach of the original Golden Record, the exhibition’s selected artworks incorporate sound, video, found materials, handmade materials and interactive media. The 13 participating artists submitted proposals for pieces that consider the significance and limitations of the record, and invite viewers to zoom out and contemplate humanity’s place within the universe.

Stephanie Sutton’s video, “Demonstration of Licking, Eating, and Drinking,” could be used to educate extraterrestrials on one of mankind’s most basic functions. Reflecting how many of the Golden Record’s selections essentially become bizarre when taken out of context, Matthew Flores’ pair of videos, “Art for Alternative Audiences 001 & 002: Who’s a Good Boy?” isolate two common occurrences—asking “Who’s a good boy?” and beckoning a dog with squeaky toy—and repeat them to the point of absurdity.

Several of the works demonstrate humanity’s rare conceptual interests and leisurely ability to create beyond survival or utilitarian purposes—something that distinguishes us from most living organisms, to our knowledge. Catherine Clements’ delicate handmade paper, “Mythos,” is profoundly simple with the handwritten line, “I am made of the place and its mythos.” Momma Tried, a collaboration between New Orleans artists Theo Eliezer and Micah Learned, experiments with augmented reality in “Goodbye Horses, Star Mall.”

ATHICA will offer new gallery hours to accommodate foot traffic from the Leathers Building’s other occupants, such as Pulaski Heights BBQ, Rubber Soul Yoga and Shiraz Athens. Guests can visit “The Golden Record” through Sunday, Oct. 7 every Wednesday through Friday and Sunday from 4–6 p.m., plus every Saturday from 12–6 p.m. As one of the major art venues participating in the monthly Third Thursday initiative, ATHICA will also stay open late on Sept. 20 from 4–9 p.m. A closing reception on Friday, Oct. 5 from 7–10 p.m. will double as the release party for the Sounds of Athens album, a vinyl compilation inspired by the original Golden Record.

Following “The Golden Record,” ATHICA will host its annual “Juried Exhibition” with juror Teresa Bramlette Reeves of the KSU Zuckerman Museum. Submissions will also be accepted for “Cranial Offerings,” a runway show of artist-made headpieces. Stay tuned to athica.org for details on how to participate.