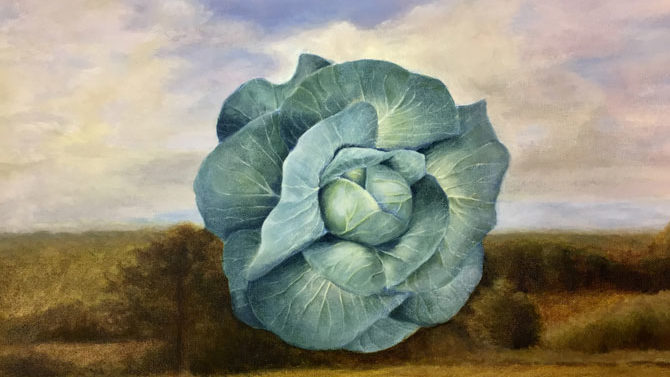 Kuykendall’s collection of oil paintings juxtapose the realism of still life with the idealism of romantic landscapes. While still-life arrangements commonly combine fruits, flowers and vessels as studies on texture and depth, each of her canvases ais solely dedicated to one subject at a time, emphasizing their individual beauty and importance. With the exception of a turnip and a pear that serenely perch on pedestals overlooking the sea and a pond, respectively, her starring characters—a peach, rutabaga, cabbage and purple kohlrabi—seem to levitate within their landscapes, adding a surreal and somewhat peculiar undertone. By placing fruits and vegetables front and center, she encourages viewers to pay more attention to nature and reflect on humanity’s role in protecting the environment.

“The natural world is under dire threats from global warming, pollution, landfills, water scarcity, invasive pests, widespread extinctions and habitat losses,” says Kuykendall. “And as we are increasingly disconnected from natural processes in our urban lives, we tend to ignore the threats confronting our globe. The vegetable is symbolic of one of our most basic elemental connections with our natural environment and how it nurtures us and vice versa. Our connection to food is a vital lifeline to the rest of the natural world.”

Kuykendall’s efforts at reinvigorating our relationships with underappreciated vegetables feels like a natural extension of her previous career. She is a former landscape architect who practiced park planning for the National Park Service and City of Denver Parks and Recreation for over 20 years. It was only about four or five years ago when she began to dabble in painting by taking classes under Charles Warnock at the Lyndon House Arts Center, where she continues to paint as part of the open studios program. Her shift to landscape painting has presented an entirely new way to engage members of the public about how to better appreciate and preserve the world around them.

Though she is fairly new to painting, Kuykendall was inspired by some of the greatest artists early on. The influences on her still-life techniques span centuries—from Caravaggio and Francisco de Zurbarán to Frida Kahlo and Georgia O’Keefe—while René Magritte, a longtime favorite, may be responsible for the elements of surrealism. Enjoying the works of 19th Century landscape painters such as John Constable and Gustave Courbet, her own background scenes hold a dreamy romanticism full of sun-kissed tones of pink and soft gold. Incorporating her professional background, she finds it interesting that romantic British landscape painters were influential on early practitioners of garden design such as Capability Brown and Humphry Repton in the early 1800s, whose principles of picturesque landscapes were later applied in the designs of Frederick Law Olmsted, the father of American landscape architecture.

A recent MFA graduate in printmaking and book arts from UGA’s Lamar Dodd School of Art, Norman provides a collection of intaglio and chine-collé works selected from her exit show held at the Georgia Museum of Art this spring. Dizzyingly detailed and full of intricate patterns, the illustrations become increasingly more bizarre the longer you gaze into them. Look closely at “Home Grown,” a portrait of an alligator proudly wearing a crown beneath a tree, and you’ll find tiny polka-dotted mushrooms sprouting off of the sprawling roots, as well as what appear to be stems of teeth growing like foxglove. Lean in to the imaginative “Heirloom,” and you’ll spot a scaled dragon slinking across the fruit’s peel.

Like Kuykendall, the paintings of Atlanta-based artist Peragine are in part inspired by meditations on the complex relationships between mankind and nature. Innocent and tender on the surface, three of his paintings depict gentle, big-eyed bunnies and a newborn fawn curled up among wildflowers, rendered in such a large scale that the cuteness is almost overwhelming. His remaining two pieces, however, show white rabbits positioned stiffly under bell jars, reflecting some of the most prevalent source material for his work: taxidermy and natural history dioramas.

Part of a larger body of work called “Love Me Till My Heart Stops,” the paintings collectively suggest how often mankind will go to great lengths to capture and keep what it admires, only to destroy it in the process. The hazy blur of the paintings resembles vaseline on a camera lens, evoking the sensation of grasping for a memory and feelings of nostalgia.

After completing his undergraduate studies at Lamar Dodd, Peragine received his MFA from Georgia State University, where he has been on the faculty since 1996, advancing through the ranks to his current position as professor in drawing, painting and printmaking. Effective this month, he is the new director of GSU’s Ernest G. Welch School of Art & Design.

“Spotlight 2018” will remain on view through Sept. 15. Right outside of the main entrance, the Glasscube@Indigo is currently housing Jaime Bull’s site-specific installation, “Pillow Fight.” Inspired by slumber parties, jumping on beds and staying up all night, the scene incorporates soft forms covered in sparkly fabrics, a disco ball and a light show that begins every night at 7 p.m.