Artists Demonstrate a Range of Techniques in ‘Rock Paper Scissors’ 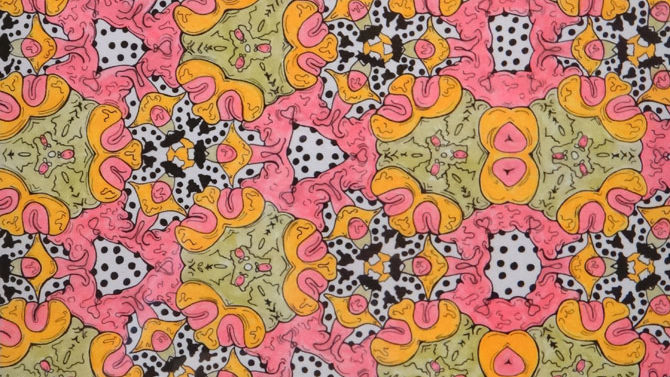 Drawn and painted, dyed and sewn and cut and folded are just some of the many ways that paper, an otherwise comparatively ordinary material, can be manipulated into new and visually captivating forms. “Rock Paper Scissors,” currently on view in the Gallery@Hotel Indigo, aims to highlight the versatility of this adaptable medium through the artwork of six women.

In addition to their bold, eye-catching colors, Leisa Rich’s unusual mixed-media pieces immediately stand out within the exhibition for two simple reasons: They technically are not made on paper, and, more excitingly, visitors can touch them—a rare opportunity in a gallery setting. Rather than working on paper, the Atlanta artist, who has a background in fiber art, chose to interpret the theme as it applied to her existing body of work. Her tactile, interactive panels are made on translucent plastic that is embroidered, decorated with biomorphic shapes of various materials and cut to create windows peering into other panels below. Viewers are encouraged to mix and match the sheets for new combinations.

“Each of these pieces has organic, rock-like shapes within—whether through the use of color blocks or by slicing holes using scissors—and fabric and plastic that simulates paper,” says Rich. “I was also considering the title from a tactile perspective, with rock being hard—glass, metal frames, rigid plastic; paper being strong yet flexible—fabric, soft plastics; and scissors as the tool that shapes the direction of the work.”

Drawn to the fluid, unpredictable nature of watercolor, Malissa Ryder views painting as as a form of “reverse excavating,” where marks can be added but never subtracted. Her paintings layer thin, translucent fields of color directly on top of each other. One color typically prevails from a distance, but up close, viewers will notice each shade in its purest form peeking out along the edges. As each layer of color is added, the watercolors flow and sink into the paper, creating natural textures and the illusion of movement.

“At times, if I feel stuck when working on a piece, I’ll think of the phrase ‘simple form, complex color,’ and it helps me to rebalance a bit and avoid overworking the painting,” says Ryder. “Watercolor has this huge potential for transparency and color depth, but can also be pretty easily pushed to a point where it loses its vitality. I think it’s important to try and bring a work to its fullest resolution, and at the same time to preserve those unique qualities that can make watercolor so exciting.”

Lucha Rodriguez, who has a master’s in printmaking from SCAD Atlanta, demonstrates two distinct approaches to working with paper for the exhibition. Her “Brightness” series uses saturated shades of neon markers to depict kaleidoscopic patterns of shapes resembling organic, bodily entities in constant movement and growth. Her “CUT” series is a collection of four square shadow boxes containing three-dimensional constructions in color combinations of white, black and hot pink, experimenting with how perception can change when colors are manipulated.

“Paper, to me, is both the canvas and the paint, and sometimes even the frame. When you touch paper, you feel an organic connection to something that is almost breathing,” says Rodriguez. “It’s also very delicate in its nature in the way that you need to handle it very carefully or it will bend the wrong way or get dirty, which can be frustrating sometimes, but also rewarding because it teaches you to be patient.”

The mandala-inspired works of recent UGA grad Blair Janine Taylor similarly incorporate pattern and repetition for visually ordered and lighthearted designs. An homage to her pet chihuahua, Taco, half of the series places her tiny, big-eyed companion front and center, while the other half has a circle of golden silhouettes prancing around a succulent, tomatoes and roses.

First appearing in the recent solo exhibition “Putting the House in Order” at the Museum of Contemporary Art of Georgia, Elizabeth Lide’s drawings were inspired after a massive effort to reorganize her home and studio. Handmade papers collected from Vietnam, India and the Philippines laid the foundation for drawings of geometric grids, which were then filled in with colored shapes.

“Ordering space became a focus in my new drawings,” says Lide. “Pages were broken up in ways that felt meditative, the structure of grids regulating and introducing the notion of repositories, and circles referencing wholeness, eternal cycles and portals.”

Like Lide’s works, which inspire viewers to imagine the people and places the paper came from, Kendal Nevada King’s works resemble historical scraps from the past. For her “Quilt Piece” series, she stained and textured cotton fabric using clay pigment, rust and plant dye to create well-worn appearances. “Beside the Tin Pile” and “That Field Behind the Old House” present faded photographic images behind thin veils of napkin and cheesecloth, reinforcing qualities of nostalgia and distant memory.

Curated by Didi Dunphy, “Rock Paper Scissors” will remain on view in the Gallery@Hotel Indigo through Saturday, July 29.