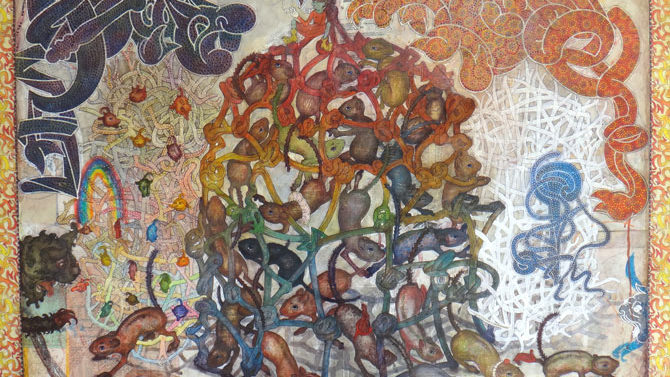 JURIED EXHIBITION: Demonstrating the Lyndon House Arts Center’s steadfast dedication to showcasing contemporary artwork from the community, over 300 artists submitted a total of nearly 800 pieces for consideration in its “42nd Juried Exhibition.” Ranging from painting, drawing, photography and works on paper to sculpture, ceramics, fiber and metalwork, the vast array of artwork reflects the diversity of talent in Athens.

This year’s guest juror was Susan Krane, who most recently held the position of executive director at the San Jose Museum of Art for eight years. In the past, she has served as the director of the Scottsdale Museum of Contemporary Art and the University of Colorado Art Museum, as well as the curator of modern and contemporary art at the High Museum of Art. Holding multiple degrees from Harvard Business School, University of Colorado and Columbia University, she has authored several publications and organized over 60 exhibitions.

Krane whittled the pool of entries down to 162 works of art for this year’s juried exhibition, offering a tremendous number of landscapes, portraits and abstracted images to get lost in. Richard Herzog’s installation piece “Utopia Urban Forest” immediately commands attention, emitting soothing low-frequency tones. Resembling a tree constructed from gently balanced rectangular blocks, a small speaker is placed at the tip of each sprawling root. Lauren Fancher’s mixed-media “Hope Chest” is an interesting ornate metal box that opens to reveal two mirrors. The pale blue glow of a film loop hidden inside the box escapes through a cluster of tree trunks etched onto the surface of the mirror, creating an illusion that the film’s figures are slowly marching through a forest. Jim Barsness’ mixed-media collage “Collander” is a chaotically colorful scene of rodents escaping from a bell-shaped enclosure, drawing to mind the Mouse Trap board game.

The Lyndon House is hosting an artist talk every Thursday from 6–7 p.m. this month to give participating artists an opportunity to discuss their practice and work with the public. On Apr. 13, Zeeshan Bakht, Sara Brogdon, Adrienne Kitchens and Zach Werbalowsky will lead a tour highlighting their pieces.

Apr. 20 features John Ahee, Barbette Houser, Jennifer Vess and Wilma. Ahee’s vibrant portrait is painted with bold splashes that pop into cohesion, while Vess’ photorealistic painting is alluring for its perplexing subject matter: a fully clothed woman lying in a bathtub. Flagpole contributor Houser offers a large geometric quilt that softens its crisp edges through pastel shades of pink and yellow, while Wilma’s unique photographic approach to spinning scenes can be observed through a separate solo show in the Lounge Gallery.

The series closes out on Apr. 27 with Jaquelynn Faass, Erin McIntosh and Duane Paxson. Faas, a painting and drawing student who will graduate from UGA’s Lamar Dodd School of Art this semester, depicts a peaceful, smiling older woman reflecting in nature. McIntosh, an assistant professor of art at the University of North Georgia, contributes an abstract painting in her signature style of combining biomorphic and geometric forms. Paxson, whose sculptures often incorporate steel, fiberglass, textured resin and ceramics, is similarly influenced by the patterns and mysteries of nature.

In addition to the artist talks, a self-guided tour and family-friendly gallery activity is available. The “42nd Juried Exhibition” will remain on view through Saturday, May 6.

MURAL FOR THE SOUL: Currently underway, a new mural located on the exterior wall of Food for the Soul on West Broad Street seeks to contemplate the relationship between police and the public. A panel reflecting the past and present depicts protestors holding signs with slogans such as “Equal Rights for All” and “Voting Rights Now” near officers keeping them in line. An optimistic scene from the future shows a much more unified crowd holding up peace signs.

A project of UGA professor Brian N. Williams’ freshman seminar “The Current State of Police-Community Relations: Problems and Prospects,” the mural reflects cooperation between enrolled students and representatives from the Athens-Clarke County Police Department, the Clarke County School District Police, the Clarke County Sheriff’s Office and the UGA Police Department. It should also come as no surprise that Broderick Flanigan, an artist and activist who has organized several mural projects in the past, will lead teenagers and other community residents in painting the mural. An official dedication ceremony will be held later this spring.

ATHFEST ARTIST: Every year, AthFest Educates selects a different visual artist to create a cohesive theme for the AthFest Music and Arts Festival in June and the AthHalf half marathon in October. The nonprofit recently announced that its committee has chosen graphic designer Daniel Fell, whose designs will incorporate bright colors and local references into visuals that convey the festival’s spirit. The promotional artwork will be featured on merchandise, advertisements, event signage and online at athfest.com.