Take a Trip to ‘Bear Camp’ with Will Eskridge 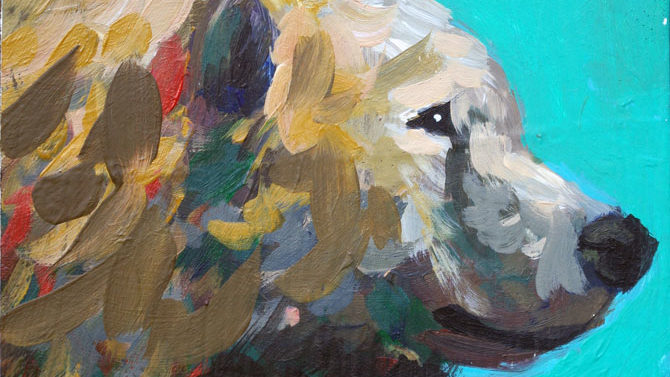 Human innovation has given rise to countless modern conveniences over the centuries, but not without great expense: Many of the technological advances we’ve come to depend on in our daily lives have had dire effects on the natural world, essentially forcing its inhabitants to adapt or die. Raising awareness for animals directly influenced by mankind’s dominance, local artist Will Eskridge’s subjects are most commonly creatures that have been exploited by humans for food, companionship, sport or entertainment.

“I tend to choose those that are endangered or that have been over-manipulated by humans for consumption, like farm animals, or for entertainment, like commercial zoos and circus animals,” he says.

Heavy as that may be, Eskridge’s contemporary animal paintings remain optimistic at heart. Through exploring the balance of nature versus technology, his images provoke questions of how to live more mindfully, improve environmental welfare and harness technology for better stewardship of the earth. 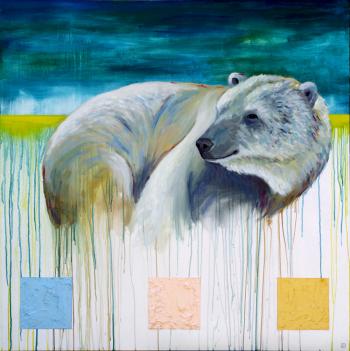 “Snuggle Up, It’s Going to Get Cold” from Eskridge’s “Environmental Habits” series

Eskridge’s main body of work, “Environmental Habits,” is an ongoing series of oil paintings that depict lone animals confronted by hard-edged, highly textured geometric shapes within atmospheric landscapes. The gentle, impressionistic style of the animals within their fluid, drip-heavy settings establishes a delicate yet enduring wilderness. Juxtaposed with abrupt geometric objects representing the man-made structures of the industrialized world, the scenes address the relationship between mankind and nature and question how to maintain a balanced coexistence.

“The geometric shapes represent modern society as a whole. They could be shipping containers from mass production, or pixels from the digital information age,” says Eskridge. “Whatever they are, they are from a modernized and technologically advanced culture that, at first, seems out of place to the natural environment of the animal. Then, you notice the bright commonality of the colors between the environment and the shape, [and it] becomes apparent that these two can work together and maybe even help each other.”

Eskridge’s latest endeavor to explore animal habitats is “Bear Camp,” an outdoor environment dedicated to one of his most commonly occurring characters. The multimedia installation consists of a large, three-dimensional sculpture accompanied by two-dimensional works, video projection and sound.

“It seems every few months I read or hear a story about a bear attack,” says Eskridge. “The ranger or officials feel the need to go kill the bear. Upon further reading in many of these articles, you’ll find out that either a hiker went way off the trail or that a camping group left a bunch of trash. These stories provoked me to question the boundaries of habitat and territory among animals.”

An open studio reception and viewing party for “Bear Camp” will be held this Saturday, Oct. 17 from 5–11 p.m. at the Eskridge Art Studio, located at 455 Vincent Dr. In addition to exploring the installation, visitors can get a behind-the-scenes glimpse of works still in progress within the studio and shop from a selection of paintings and handmade holiday housewares. Attendees are encouraged to tag photographs on social media with the hashtag #bearcamp, and the entire event will be streamed live on YouTube as “Bear Camp Open Studio.”

Confronting issues of territory and habitat control, “Bear Camp” will be visually and conceptually similar to “Wolf City,” an immersive installation the artist presented in March at the Bulldog Inn Art Show, an annual tradition in which local artists transform the roadside motel’s bedrooms into a gallery row of installations and experimental performances. A giant sculpted wolf head surrounded by stacks of white shipping boxes served as the focal point of the room, set to a soundtrack of wolves howling and growling. On one wall, a dozen painted portraits of “Wolf City Residents” were displayed in a grid, and on the opposite wall, a time-lapse film loop of of a tiny ice wolf sculpture melting in the sun was projected.

“My overall vision for ‘Wolf City’ was to express the hypocrisy American society has as a whole regarding animals. On one hand, we adore the wolf and its majestic quality, while on the other, legislation and laws come and go that sanction wolf hunts,” says Eskridge. “So, my idea was to sarcastically say, ‘We just need a Wolf City to completely control the production and shipping of wolves when and where we want them.’” 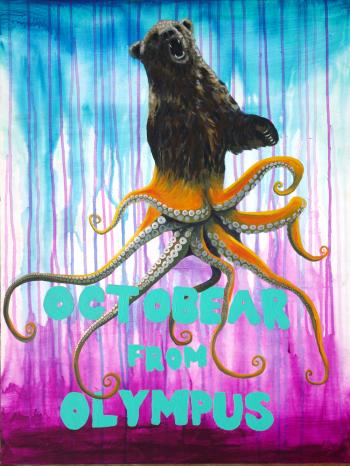 “Octobear from Olympus” at The World Famous

This tongue-in-cheek approach to confronting serious environmental issues is similarly reflected through “Creature Features,” a series of paintings currently on view at The World Famous through October. Inspired by the campy “creature feature” film posters of the 1950s–‘70s, Eskridge’s paintings depict hybrid animals with alarming titles like “Owligator from the Sky,” “The Ghastly Giraffula,” “Sins of the Seacupine” and “Octobear from Olympus” (which graces the cover of Flagpole this week). Though playful and absurd at face value, these atomic-age mutants carry a sincere undertone of concern towards the consequences of human intervention on the natural world.

“I would like people to slow down and think about their daily choices that affect the environment. I would hope someone viewing one of my pieces might stop to think and choose a veggie burger at least once [to] save a life, as well as about 450 gallons of water,” says Eskridge. “I think artwork can be very effective at raising awareness. It doesn’t have to be a painting or sculpture. Films, music and writing are works of art that are highly effective, as well. I think they are probably more effective if working in tandem.”