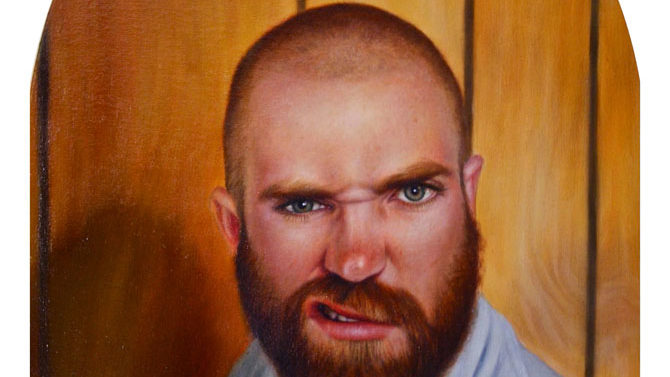 Tabletop Triumphs: UGA painting professor and gallery curator Jeffrey Whittle, who was recently named as one of Oxford Americanâ€™s â€œNew Superstars of Southern Art,â€ presents his paintings at Etienne Brasserie through March. Whittleâ€™s color palette is gorgeous; watery blues, greens and peachy colors form compositions of fruit or plastic toy cowboys in a shootout amid seashells resting on a kitchen table.

Still-life paintings can be simply assemblies of objects, but often we are invited to consider the transitory nature of life and our own mortality. Viewed through this lens, Whittleâ€™s painting of three peeled pears sitting side-by-side becomes much more than just a picture of fruit. Undressed and exposed, the pearsâ€™ fleshy forms could be a depiction of middle age. Soon to show more signs of bruising, they stand for now in a moment of defiant beauty and in full possession of their corporeality.

Similarly, Whittle describes one of his cowboy combat paintings, â€œItâ€™s Doom Alone That Counts,â€ as both a â€œcool still-life set upâ€ and a response to the feeling of â€œindecision [when] gazing at chaotic action and destruction.â€ It is this combination of aesthetic beauty and emotional insight that makes these seemingly simple paintings so compelling.

Ticket to Ride: A Lamar Dodd School of Art alumna who has recently returned from her MFA studies at the New York Academy of Art, Meredith Lachin brings a little bit of the Big Apple to Watkinsville in the form of her â€œmetrocard projectâ€ on view at the ArtLand Gallery, a newly opened art space located on the second floor of Chops and Hops. Lachinâ€™s small paintings on subway access cards are joined by larger monotype prints on paper in the exhibition titled â€œRestraint and Release,â€ contrasting the controlled and miniature metrocards (“Restraint”) with the looser prints (“Release”).

Lachin describes the projectâ€™s development: â€œI began working on Metrocards in New York in spring 2010 when there was a call for entries for a show of â€˜paintings on recycled metrocardsâ€™ put on by a colleague of mine from the New York Academy of Art. The first show, called â€˜Single Fare,â€™ was hosted in his studio in Brooklyn and got quite a bit of attention.â€

The show appeared twice more, and by then Lachin had a large collection of cards. She found them to be an excellent canvas for small studies: â€œI started off doing portraits of people I knew, screaming, because I often felt like I wanted to scream while on the subway; I thought it was an appropriate translation of my stifled emotion to portray someone screamingâ€”another â€˜silenced screamâ€™ on a metrocard.â€

Lachinâ€™s formal training includes classical â€œold masterâ€ techniques and the study of anatomy, which is easy to see in her portraits and pictures of hands, but perhaps less apparent in the abstract monotypes that also appear in the gallery. I asked her where the two approaches met for her.

â€œThe academic studio training I received has not only greatly enhanced my ability to make good judgement when it comes to the formal qualities of my abstracts, but has also raised my aesthetic standards. My knowledge of the figure, first and foremost, has been the most vital training I have received. The figure is all about the relationships of masses, and much abstraction is based on the same principle. And, let’s just say I am a firm believer in the saying, â€˜You have to learn the rules before you can break them,'” she says.

Our art community is lucky to have Lachin as a returning member, and I will be looking forward to seeing more of her rule-breaking artwork in Athens in the near future. Her current exhibition is up through March.

Growing Pains: If the generative act of creating art can be compared to giving birth, Lisa Freemanâ€™s â€œPeculiar Childrenâ€ are two-dimensional progeny that recreate moments in her own childhood in the form of haunted-looking kids in settings occupied by a puzzle of symbols. Allegorical portraitsâ€”not necessarily of a person, but of an experienceâ€”line the walls at ARTiniâ€™s Art Lounge in downtown Athens through March. In each painting, Freeman presents one or two figures that are nearly identical. These children have almost elderly faces with weary eyes and careworn expressions. Though one composition references Diane Arbusâ€™ photograph â€œChild with Toy Hand Grenade,â€ others appear as personal allegories with buttons, thread, untied shoelaces and playing cards representing fate and the ties that bind us.

Southern Hospitality: In a charming confluence of setting and subject matter, White Tiger Gourmet is currently showing Mary Porterâ€™s beautifully bright paintings of front porchesâ€”one of the best things about living in the South. With vivid colors and strong line, Porterâ€™s paintings radiate sunshine. Most are scenes of porches with chairs waiting to be rocked and flowers blooming by banisters. There are other scenes, as well, like squash and bacon cooking on a stove, which are just as inviting. Grab a BBQ sandwich and some sweet tea and enjoy the view through March.

Coming Up: Always one of the most anticipated events on the local arts calendar, the Lamar Dodd School of Art opened its 2012 MFA Exit Show on Mar. 23. Look for coverage on the class of 2012’s creations in the next Art Notes column… ATHICA closes â€œSouthernâ€ on Apr. 1 and prepares for its next exhibition, titled â€œUpcycle,â€ opening on Apr. 22… At the Gallery@Hotel Indigo-Athens, â€œThe Flower Showâ€ blooms on Apr. 12, and the Georgia Museum of Art‘s exhibition â€œSouthern Folk Artâ€ opens on Apr. 28 and will include works from the permanent collection.