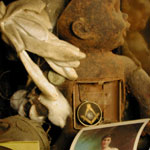 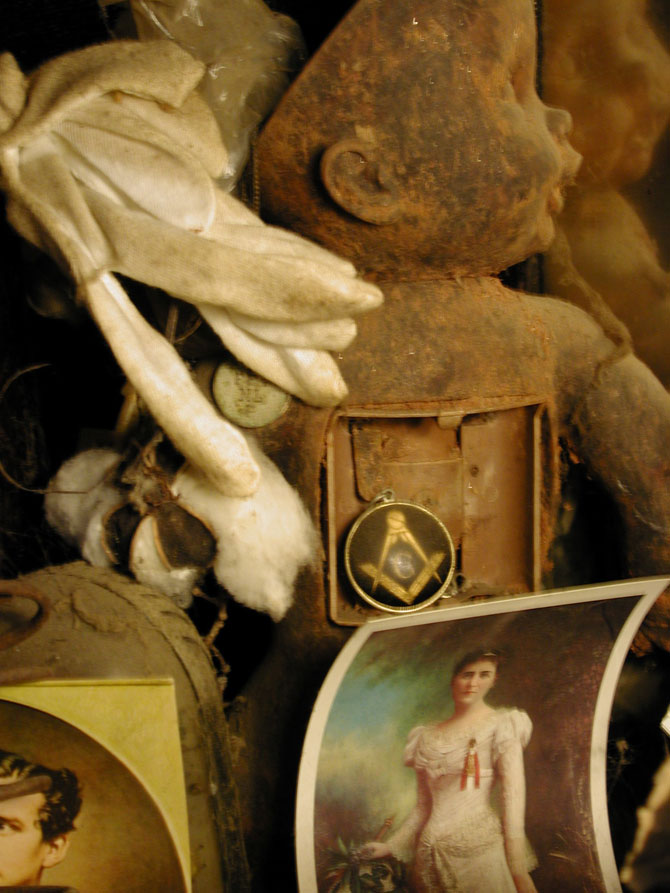 Sam Seawright’s photography series “A Poet’s House” is on display at ATHICA through Mar. 4.

The word â€œSouthernâ€ conjures up dozens of evocative images and polarizing stereotypes. To title an exhibition of contemporary art with this adjective poses a challenge for us as viewers: What do we expect to see, and will we be surprised, annoyed or comforted by what we find? At ATHICA, Lamar Dodd School of Art professor emerita Judith McWillie, assisted by Lauren Williamson, has curated an exhibition of painting, sculpture, photography and multi-media work by artists hailing from around the U.S., but who have all called the South home at some point in their lives.

I was surprised to find absolutely no instances of kudzu, magnolias in the moonlight, or falling-down shacks anywhere. Sure, there is religion and politics; there are ghosts, history and a few Confederate flags, but what I believe McWillie wants us to see is evidence of artists working in (or with) the South in a way that defies stereotypes. In an interview, McWillie described the reason she wanted to focus on contemporary artists from this region:

â€œSoutherners have been making historically important modern art since the early 1960s. Some have had an enormous influence on the art world and the culture at large: Robert Rauschenberg, Jasper Johns, Cy Twombly in painting and William Eggleston in photography, for example. I wanted to historicize this period and then focus on what I believe to be the axis of a specific sensibility, a â€˜subliminal spiritualityâ€™ manifesting in all of the works in the exhibition even though they are different from one another aesthetically.â€ 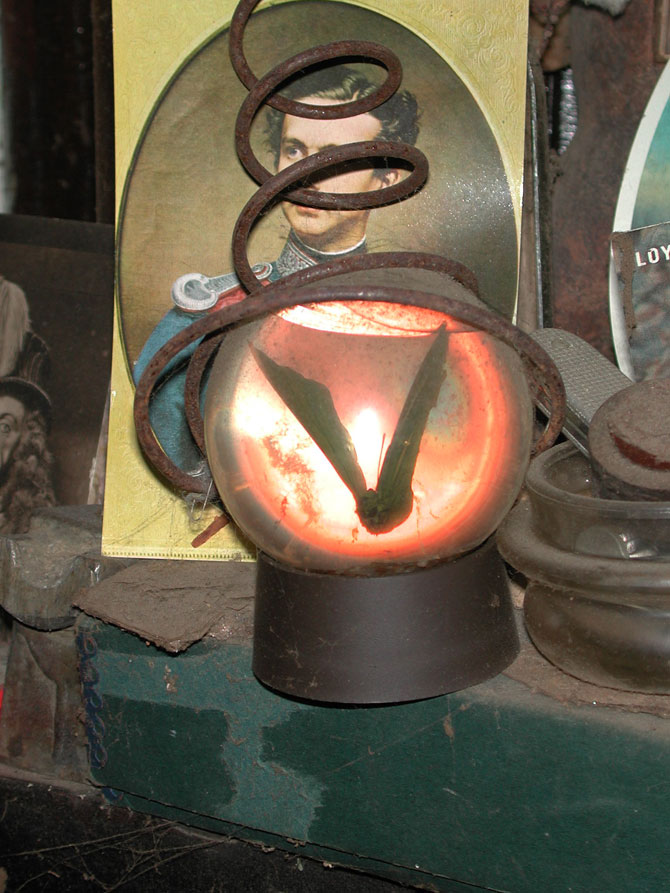 The exhibition begins with a collaborative work between two brothers, Sam Seawright and his brother John, who passed away in 2001. â€œA Poetâ€™s Houseâ€ is comprised of Samâ€™s photographs of items in Johnâ€™s home: vignettes of old postcards and letters, rusty ornaments and dusty items, each with a patina of history and romance. Samples of Johnâ€™s poetry and writing are also part of the exhibition, including his â€œGhost Fryâ€ column which appeared in Flagpole for many years.

On the same wall is work by DrÃ©k Davis, who communes with the past in the form of large, painted fans combining Haitian Voudoun symbols to create new meanings. He applies this syncretic approach in two paintings from his â€œIdle Warshipâ€ series. On a painted canvas fastened to the floor, Davis overlaid the â€œstars and barsâ€ with Oshun patterns and invites visitors to walk over the flags, perhaps as a gesture of desecration or of acknowledgment that we stand on this shared history.

A second flag is beneath Stanley Bermudez Morosâ€™ painting â€œHeritage?,â€ which also echoes the Confederate banner. Bermudez Moros critiques this symbol by incorporating images of lynching and the KKK into the painting, which was banned from the Biennial Faculty Exhibition at Gainesville College last year. Creating a different kind of symbolic textile, Hope Hiltonâ€™s ghostly quilt made of cut vellum recreates the story quilt made by Harriet Powers, a former slave who lived in Washington, GA and whose original artwork is part of the Smithsonian collection. Against the pale gallery wall, the quilt is just perceptible, but close attention to the cut pieces reveals narratives in the panels. Hiltonâ€™s rigorous research into Powersâ€™ life and artwork is memorialized in this delicate tribute.

These artists, in particular, seem to explore the idea of communing with the dead and exploring their own connection to the past. I was reminded of that often-quoted line from William Faulkner’s Requiem for a Nun: “The past is never dead. It’s not even past.” I asked McWillie if she thought this tendency was a particularly Southern trait. She replied, â€œWe say that the show includes four generations of artists because it treats the deceased ones such as Harriet Powers, Washington Harris and John Seawright as contemporaries of the other nine. The exhibition is the catalyst for creating this â€˜radical contemporaneity.â€™ So, if Faulkner’s quote is accurate, and I believe it is, there is no need to distance any of these artists from one another by age, race or taxonomy. Once we realize that, there is no such thing as an anachronism, and the dead continue to communicate through what they have made.â€

The living past is a part of the elaborate “recreation” of Washington Harris‘ Saint Paul Spiritual Holy Temple in Memphis, TN. The folk art temple was created by Harris, an African-Native American from central Mississippi, and his extended family in the tradition of New Orleans spiritual churches from the 1920s. Currently, due to lack of funding for upkeep, it is threatened with decay. The site is comprised of over 1,500 works of sacred art that Harris called â€œThe Degrees of God.â€ Recreated here as a separate space in the gallery, the installation allows visitors to enter and sit in contemplation. McWillie adds that this workâ€”both in Memphis and in ATHICA as documented by the photography of James Perry Walkerâ€”â€œinhabits the same space and time as Michael Lachowski‘s photographs of Segway scooters and deer trophies and Sam Seawright’s photographs of his brother’s artifacts. I propose the temple as a new Southern archetype; from there, the works in the exhibition inform each other in unexpected ways.â€

Unexpected, indeed, were Judy Rushinâ€™s minimalist sculptures. These grid-like compositions of cast plastic and boards may be somewhat unassuming at first glance, but they, too, have a history. The artist began using these materials after experiencing Hurricane Katrina firsthand. Her assemblages speak of human connections and piecing life back together again from the flotsam and jetsam left behind in a disaster, real or figurative. Steven Thompsonâ€™s site-specific installation, â€œWorship the Wind,â€ is similarly a work in abstraction. Badges bearing phrases like â€œTrust the dustâ€ and â€œWorshipâ€ are attached to a branch-like structure, forming what McWillie sees as a comment on â€œ…the destabilization of values as markets supersede the core dynamics of identity.â€

Creative affiliated events are a hallmark of exhibitions at ATHICA. Though Ted Kuhnâ€™s performance of â€œKeep Hope Aliveâ€ has already taken place, there is more to come this weekend. On Friday, Feb. 17 at 6:30 p.m., there will be a multi-media and literary event organized by Judy Long honoring John Seawright, titled “The Universe of John Seawright,” with readings by local writers and artists, including Coleman Barks, Dana Downs and Flagpoleâ€™s own Pete McCommons. This Sunday, Feb. 19 from 2â€“4 p.m, “Stitching Stars,” a children’s workshop led by Hope Hilton, will engage kids in learning about Harriet Powers and making their own paper quilt-square. The closing event on Sunday, Mar. 4 from 3â€“6 p.m. includes a lecture by Judith McWillie on the Saint Paul Spiritual Holy Temple and her efforts to both document and save these important cultural artifacts. See www.athica.org for more information.