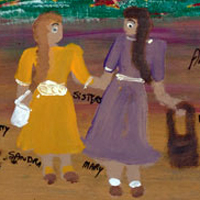 Visions and Memories: Making a visit to the Visionary Growth Gallery in Danielsville is really more of a journey than a quick drop-in. Driving down country roads into pretty farm- and pasture-land puts one in the right mindset to experience gallery-going in a different way. After my most recent pilgrimage, gallery owner Robert Lowery greeted me at the door of the cottage and welcomed me inside. Lowery is an enthusiastic host and added a richness to my visit with the stories he told of his close friend Annie Wellborn, whose paintings are now on display through April, along with separate art exhibits by Carter Wellborn, Lois Curtis and others.

Curtisâ€™ paintings are small portraits on paper and canvas. Her show, titled “Drawing Pretty Pictures Is a Way to Meet God in the World Like It Is,” features figures with wide, expressive eyes in large heads atop doll-like bodies. Vivid coloration and strong lines lend the subjects life. Curtis, also an advocate for civil rights, was invited to the White House by President Barack Obama last year as part of a celebration of the Olmstead Decision, which granted greater autonomy for individuals with developmental disabilities.

Annie Wellbornâ€™s brother-in-law, Carter, also has several drawings on display. Like many folk artists, Carter paints on any “canvas” available: boards, paper, tables and even a guitar. The colorful patterns he creates are even more powerful when seen in great numbers, as we have here. The marching cows, clocks, â€œclock peopleâ€ and dotted lines create a dizzying effect in multiples and seem to give off a buzzing energy.

An artistic inspiration to many, including Carter, Annie Wellborn was born in 1927 in Lexington, GA and lived nearby in Bishop until her death in 2010. Described in the Rosenaksâ€™ art history tome Contemporary American Folk Art as â€œlegendary,â€ Wellborn is also regarded as an artistic visionary by Lowery. A self-taught painter, Wellborn painted images of angels she saw in the hospital during her prolonged illnesses, as well as memories of her home in rural Georgia. These images include cotton fields, apple trees and farm houses inscribed with stories from her own life and thoughts about the nature of home, family and memory. These â€œMemory Paintingsâ€ depict scenes of daily life from long ago, with Wellbornâ€™s explanations serving as a lesson in folklife and the way things used to be. The tenderness with which she formed these images pulls you into a different world. For instance, a picture of the old family homestead is accompanied by her thoughts on the fate to which these old wooden buildings are left once unoccupied: â€œ…they finally give up and collapse. How sad, but they have given a lot of warmth to us.â€ I believe she has given us a lot of warmth in these paintings, which are well worth a visit to this captivating art space.

The Wildest Gumbo: Those who have met Vernon Thornsberry know him for his unshakable good cheer and charmed perspective on the world. An exhibition of his paintings at ARTiniâ€™s Art Lounge, titled â€œUnthinkable Waves,â€ brings together more than a dozen images. Thornsberry grew up in New Orleans and is a self-taught painter. He drew in the city park and then in a tin shack, painting by candlelight when he could not afford electricity. His friend, photographer George Dureau, encouraged him in his work and helped him buy supplies for his paintings. At the suggestion of a friend from Athens, GA (Rick Hawkins), Thornsberry made a trip here in 1986 and decided to stay. His paintings, however, still depict some of the stone courtyards, markets and gardens of his native New Orleans.

Thornsberry studied the work of Old Masters like Michelangelo and Leonardo da Vinci, and one will find nods to other famous painters, as well. For example, â€œEntertainingâ€ depicts a reclining nude woman beneath a columned portico. She faces the viewer as other figures linger in the background; a small dog is at her feet, and flowers are at hand. This work echoes the composition of Titianâ€™s â€œVenus of Urbino.â€ Thornsberry also paints equestrian compositions and shows skill in creating the feeling of muscle movement in his depictions of horses, while also imparting a sense of emotion to the animals. What is most interesting to me is the compression of historic eras in some of the paintings. â€œEnglishmanâ€ is a picture of a man on horseback in profile. He wears colonial dress complete with a tricorne hat and white wig. As he crosses a bridge on his blue-eyed horse, a bevy of women wearing pink bikinis splash about in the river. The womenâ€™s dress and actions seem out of time with those of the male figure, creating an interesting juxtaposition.

The experience of viewing his paintings can be enhanced by reading the two books Thornsberry wrote to accompany his artwork. They tell stories of his life in New Orleans and include poetic narratives to explain the action in the painted scenes. â€œUnthinkable Wavesâ€ will be on view through January with new paintings rotating in and out as the weeks go by.

New Publication: Fans of legendary local potter Michael Simon will be glad to know there is a new book of his work out now from the folks at the Northern Clay Center (and distributed by the UNC Press) called Evolution. A working potter since the 1960s, Simon went to grad school at UGA in 1979 and developed a life-long friendship with fellow potter Ron Meyers, with whom he shared several joint exhibitions over the years. This new coffee-table book is chockfull of gorgeous photos of his work: utilitarian pottery created with Zen-like simplicity and elegance. Evolution is a beautiful document of Simon’s career and his development as an artist. See uncpress.unc.edu for more info and to order a copy. [Christina Cotter]

Noteworthy Openings This Week: Beginning Thursday, Jan. 19, the Gallery at Hotel Indigo presents â€œDRAWN: from Athensâ€ in the main gallery with work from 11 North Georgia-based artists, including Art Rosenbaum, James Barsness, Leslie Snipes, Kathryn Refi and Jeff Owens. The reception on the 19th is from 6:30â€“8:30 p.m. â€œLook for Light,â€ an installation by Michael Oliveri on display in the exterior â€œglass cubeâ€ space of the hotel also opens this night. ATHICA opens its 44th exhibition, â€œSouthern,â€ on Saturday, Jan. 21 with a reception from 7â€“9 p.m. Curated by UGA art professor Judith McWillie, the show includes work by Sam Seawright, Hope Hilton, Michael Lachowski, Steven Thompson and more. Look for events related to this exhibition in future Art Notes.