I’ll be eating Thanksgiving dinner with my parents, brothers and extended family. I’ve been a vegetarian for eight years, but they don’t seem to fully understand or care or pay attention to what that means. Here’s what it means: It means I don’t eat meat! So, obviously I don’t eat turkey, but I also don’t eat green beans cooked with bacon or dressing cooked with sausage or anything else with meat in it. Every year they act surprised when I don’t take any turkey, then “remember,” then pass me the other sides as though cornbread and mashed potatoes makes a full meal.

Then, of course, people feel compelled to comment on what I eat and don’t eat, how “crazy” it is to  be vegetarian, how delicious meat is, and on and on. I love my family, and I want to spend time with them, but I’m really starting to dread this meal. I’m going to wind up hungry, defensive and cranky. Is there a way to deal with this, or should I just resign myself to dreading this holiday?

Okay, Vegetarian, our two goals here are to make sure you get enough to eat and to keep the focus off your vegetarianism for one day. We’re going to proceed with those things in mind. We are going to have to decide that some things—explaining to your family that being vegetarian is not a radical fringe idea in this year of 2014, that it is not irrational (health, factory farming, environment, etc., etc.) and in fact it might be the case that the only reason people can continue to eat widely available meat is the tacit agreement food suppliers and the public have not to share what happens to the meat before it makes it to the supermarket—are all battles for another day.

The easiest problem to solve is making sure you don’t end up hungry. Bring some food to share that you can, and like to, eat. Don’t ask if you can bring something; just bring it. Don’t say it’s because you wanted to have something you can eat; just say you wanted to bring something. I’d suggest bringing one or two heavy appetizers that people can pass around and eat before dinner. Make sure they’re delicious and, as you already know, don’t say anything about their being meat-free. No one in your family wants to hear that, and you don’t want to open that door on this particular day. Also bring maybe one or two substantial side dishes. Again, if you want to keep the heat off your vegetarianism, make sure they’re delicious and familiar, and don’t breathe a word about their meat-freeness.

Slightly harder is dealing with other people’s comments about your vegetarianism. A good rule of thumb and etiquette is never to discuss what another person is eating. Food is a personal, political and loaded topic; not one of us knows enough to make an informed comment on what someone else is eating, because we don’t know what else they have or haven’t eaten earlier that day, week, or month and we don’t know what their health, nutrition and dietary needs are.

Here’s another good rule of thumb: When someone comments on what you’re eating, it’s about them, not about you. They’re thinking about food and their own identity: I’m a big masculine man, so I eat steak; I’m a dainty woman, so I eat salad; I eat meat, because no one can tell me not to, and on and on. Your choices make them uncomfortable, but that doesn’t have to be your problem.

Your family has taught you that any response you give to their remarks about your food will only fuel their commentary. When someone comments on what you are or aren’t eating this year, feign deafness. Truly. Don’t nod or smile politely or try to offer an innocuous response, because that gives the other person a chance to talk again. Act as though you didn’t hear it. Talk to another person at the table; ask someone to pass the potatoes, or ask the speaker an unrelated question about his life or family. There’s nothing to be gained by offering a response.

So, to recap, the first two weapons in your arsenal are food and silence. The third and most powerful is wine. That’s what everyone else is using to get through the holidays.

My girlfriend will meet my parents for the first time on Thanksgiving. My parents are pretty traditional, and I’m afraid they’ll have a problem with her nose ring. I don’t think they’ll say anything to her about it, but I’m afraid it will give them a bad impression of her. Should I ask her/warn her to take it out? Not say anything?

I think your girlfriend needs to have all the information. I suggest telling her that you like/love/don’t care about the nose ring, but that it might bother your parents. Tell her you’re OK with her wearing it or not, but you didn’t want her to be caught off-guard. Then let her make the decision.

I pulled up to my bank branch with the intention of parking and using the ATM. There was someone using the ATM, so I waited in my car, which was in a spot right alongside the ATM. I didn’t get out because it makes me nervous if someone stands near me while I’m using the ATM; I was trying to be courteous to the current user. Just before he finished, another car pulled up, the guy at the machine finished, and the new driver walked right up to the machine. I think it was pretty clear that I was next. Is that rude or am I in the wrong here? 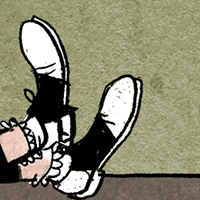 I don’t think it was so clear that you were in line for the ATM, ML. You could have been waiting for someone who had run into the bank. Getting out of your car signals that you’re waiting for the ATM. Next time, get out of the car and stand on the sidewalk near-ish the machine. Leave enough space so the current user has privacy and doesn’t think you’re about to mug him, but stand close enough that it’s clear you’re waiting.