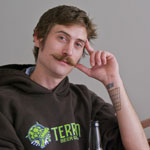 Brandon Stull asks if a “Laverne and Shirley” reference is too old for Flagpole readers. Brewing, he says, is absolutely nothing like that TV show: “If someone put a glove on the bottling line, I would smack them.” He may talk tough, but Stull is just a serious, diligent brewer. How could he not be? His labor produces what Benjamin Franklin called the proof that God loves us. That’s a big order to fill.

Stull’s career at Terrapin, Athens’ local craft brewery, began in 2006, but he got his first break in the industry 10 years ago when he snuck into a job at the now defunct Atlanta brewery, Dogwood. He quickly scaled the ranks from the bottling line to cleaning fermenting tanks, asking questions at every turn, soaking up the science in his spare time. Finally, they tapped him to brew. From his experience at Dogwood, he takes this lesson: Brew to the beer, not to the masses; brew what you believe in and the masses will follow. Yet he admits that such a hardheaded attitude, applied before craft breweries captured Georgian gullets, might have been what closed the brewery down.

Flagpole: What’s your title and how did you start at Terrapin?

Brandon Stull: I’m the head brewer, which means you’re running the show in the back unless you have a brew master as well, like we do, which means he’s actually running the show and I’m just the senior brewer. I was the very first hire in the back of the house. Before the warehouse [on Newton Bridge Road] was built, they were contract brewing up in Maryland—kegs and bottles. Then they found a place I used to work for, Zuma Brewery, in Atlanta and started contracting through them as well—all kegs. Terrapin came in just as Zuma was about to close down. Terrapin took over and I stayed on to show Spike [Terrapin’s brew master] the system, even though I’d only been at Zuma six months, and eventually they offered me a job.

FP: How do brewing shifts work?

BS: Now that we are here, in the warehouse, it’s all segregated. There’s the brewing team, the cellaring team; once it’s past us it goes from the fermenters to the bright tanks, where the finished beer goes, and then it’s to the packaging team. We are 24-hours brewing; I just walk in and take over the brew, there’s three shifts, three brewers. It used to be I was working anywhere between, if I was lucky, nine to 16 hours a day, now it’s eight-and-a–half, nine. We switch around the shifts: first, second, third. It’s almost made the job boring: exact same thing every day, different style, doesn’t really matter. How you brew is how you brew. Maybe it would change if we’re doing an Imperial, which requires some extra mashing of grain, so it just makes my day a little longer. Do you want to know the science behind it?

FP: Can you explain it quickly and without boring me to death?

BS: There’s four ingredients: malted barley, yeast, hops and water. That’s it. It starts with barley: I run it through a mill that cracks open the grain, exposes the endosperm—the starchy inside—and passes it through a grist case. I add specialty malts—different colors and different flavors. They change the grain flavor and color in the beer. I drop it into my lauterton and mix it with hot water. That activates enzymes that, with agitation and heat, convert the starches to sugars, then I pull the wort—the pre-beer liquid—out of that, the sugar water. You sparge it, adding hot water, diluting the high concentration. By the time you’re done, you have the concentration. Then you boil it: for us it’s 90 to 120 minutes, depending on style and what we’re trying to get out of it. Then you’re adding hops. There’s lots to that but we don’t need to get into it. You do this centrifuge thing that pulls liquid up and sediment down. Add yeast and you send it to fermentation, where a lot happens, but I’ll stop there.

FP: Do you have a favorite brew?

BS: Right now, it’s Extra Special Bitter. I’m not necessarily one of those brewers that goes, “It’s got to be big and hoppy for it to be good.” It’s all about the perfect blend: Malty sweetness and bittery hopness. Perfect. When I’m out, I try to get a Terrapin or two, just to check on the product taste, see how the distributors and bars have been treating the beer. Make sure the beer is staying solid.

FP: No good way to phrase this: Show me your tattoo.

BS: Which one? [He laughs and pulls up his sweater sleeve, revealing a spreadsheet of sorts, inked onto his left forearm]. It’s an empty hop table, or hop bill. I have to weigh out hops for every single brew and I’m not a fan of carrying a clipboard. So, I was writing all over my arm, but [my notes] starting getting confusing and jumbled. So I went to American Classic Tattoo and had them do it. I have space for the type of hop, the time of the boil, the varietals, the alpha acid content, which is the bittering agent, the pounds and ounces and the physical timing. I fill it up all the time. I use it every single day. I have to double-, triple-check myself. If you make one mistake, it travels down the line.

FP: Is this your lifelong work?

BS: Brewing? I pretty much have no other option now. I’m 33. It’s either take menial jobs or go back to school, which would be pretty hard to do with a family… I would love to be a stay-at-home dad, but I couldn’t stand to not be at work. I love brewing; it’s just that it’s got a little boring. All that changes is the varietals and the seasonals, which keeps me on my toes and teaches me things. But besides that, all that changes is when I work: One week, it’s 7 a.m. to 3:30 p.m., next week it’s 11 p.m. to 7:30 a.m., next week it’s 3 p.m. to 11:30 p.m. It’s my career: I take my job very seriously; I’m proud of my product; I sacrifice my family time. I’m very proud of what I do, and not to be too egotistical, but I’m pretty damn good at what I do. I don’t want to move to another career. I would like some excitement, though.

FP: Working overnight—can you describe that to me? How does it affect your family?

BS: Let me preface that by saying I have an amazing lady. She’s super understanding, concerned about me and has my best interests in mind. I’ll continue by saying that it is… a lot of people in this business find it hard to have a relationship. I tried to warn my lady when we started dating. You are a slave to the job; it’s so hard to get ahead in this business—everyone has to sacrifice. We switch shifts every week, which means I don’t see my family. I see my daughter for about 30-45 minutes a day sometimes. I see my two best friends once every three weeks. I’m very lucky that my lady is so concerned about me, telling me to get sleep. My daughter is three-and-a-half: it’s not that she doesn’t realize I’m not here, but she doesn’t understand what exactly that means yet. She knows I’m at work; it makes her that much more willing to give hugs when she sees me and that much more harder to let go when I take her to school. She’ll keep coming back for more hugs—it’s cute but very heartbreaking at the same time. I miss my family, but at the same time—I hate to say it—it’s my job. I know what I got myself into. It’s a weird life.