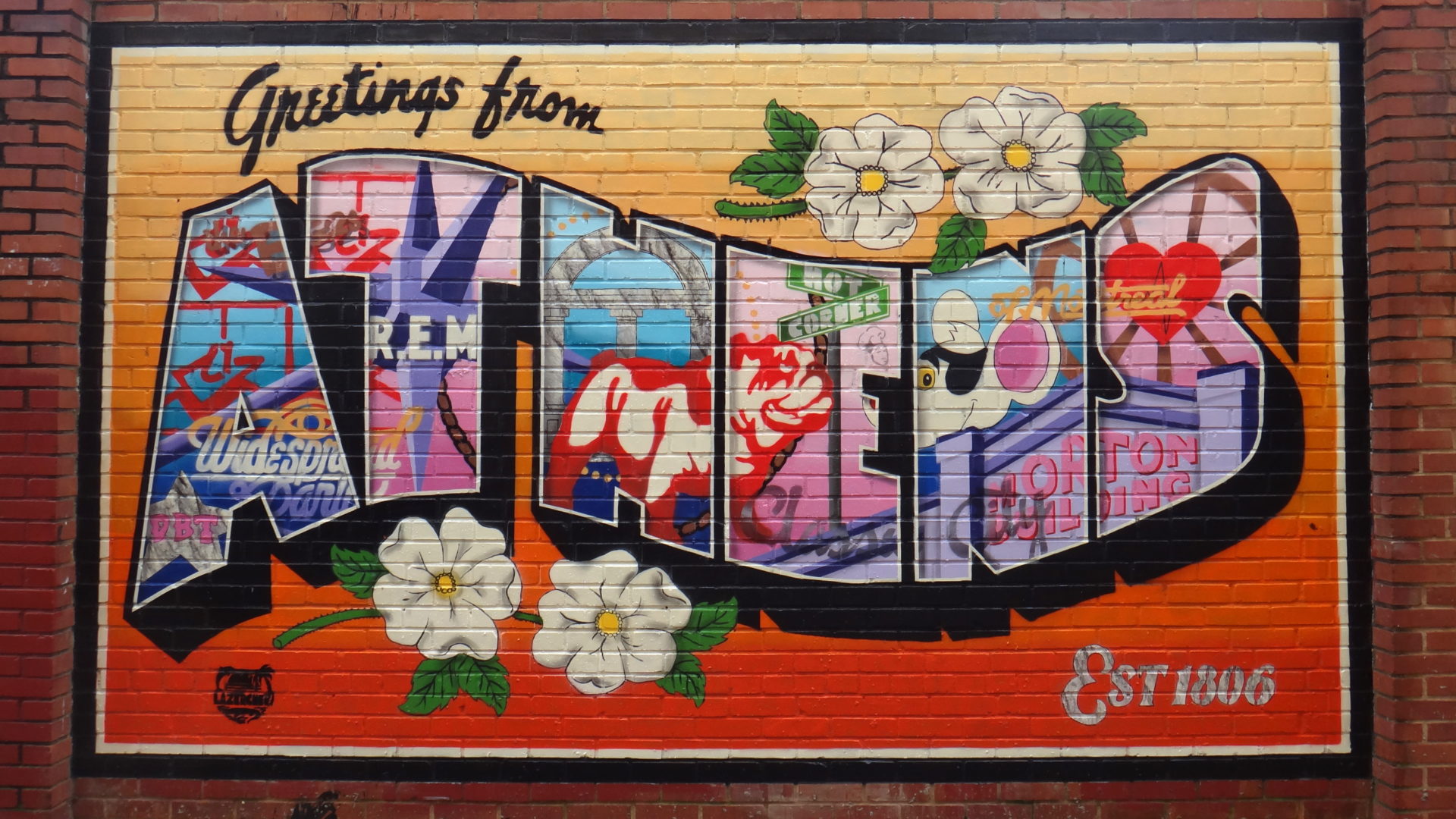 Though travel plans are still on hold for most right now, Taylor Shaw’s new mural is its own in-town destination. Appearing on the cover of Flagpole this week, the...
by Jessica Smith May 27, 2020

Though travel plans are still on hold for most right now, Taylor Shaw’s new mural is its own in-town destination. Appearing on the cover of Flagpole this week, the painting was designed to resemble a vintage “Greetings from…” postcard, and celebrates the Classic City as a cultural mecca. Embedded in the block letters of “ATHENS” is a collage of local music references: R.E.M., the Morton Theatre, of Montreal,  Danger Mouse, The B-52’s, Widespread Panic and Drive-By Truckers.

“The postcard is a symbol of the freedom of travel and a way to promote one’s city,” says Shaw, whose love of fonts stems from his background in graphic design. “The painting of the postcard turns a handheld souvenir into a huge backdrop for people to take pictures in front of. I’m interested in seeing how this plays out on social media now as a new form of the ‘postcard,’ or a digital souvenir.”

Shaw’s mural is located in an alley off of Clayton Street on the exterior wall of Classic City Cycling, a new indoor cycling studio housed in the former Chick Music space. Though the public debut in March was postponed due to the pandemic, owner Crystal Rene de Cotret intends to officially open her business on June 6 for socially distanced spin classes. After first spotting Shaw’s signature style at Creature Comforts, where he was commissioned to create artwork in celebration of the brewery’s fifth anniversary, she decided to reach out about painting a similar postcard-inspired mural for the city of Athens.

With the permission of the building owner, de Cotret worked directly with the Athens Downtown Development Authority, which funded the commission. The mural falls along the proposed route for the “Walk of Fame,” an upcoming public art project—partially funded by a tourism product development grant received by the ADDA from the Georgia Department of Economic Development—that will install a series of artist-designed plaques honoring musicians who have helped build Athens’ identity as a music town.

“I always try and do a deep dive into cities and subjects when creating these murals, and having lived in Athens for five years, worked downtown, and gone to UGA for my master’s gave me a deeper understanding of the scene,” says Shaw. “I dove into the music scene history and tried to pick iconic album covers, logos, local landmarks and imagery to pay homage to all the things that make downtown Athens great.”

Shaw, who received his MFA from the Lamar Dodd School of Art in 2019, now lives in Mobile, AL, where he teaches at the University of South Alabama. Aware that he’d be working on a tight timeline, Shaw prepped for the mural by taking care of measurements, sketches and stencil cutting in advance. Once in Athens, he was able to prime, outline and spray-paint the mural in a process that required roughly eight hours a day over the course of six days.

Influenced by tourism imagery, Shaw’s body of work reflects interests in the economy of nostalgia, production of souvenirs and understandings of the “local experience.” The beachy, leisure-loving aesthetic of his hometown of Destin, FL carries over into his other projects like sculptural pop-up miniature golf courses and lovably garish airbrushed T-shirts. More of the artist’s work can be seen outside of Chuck’s Fish, where he created the “Hey Baby” mural influenced by retro signs, and Southern Brewing Company, where an installation of three-dimensional block letters painted with local landmarks spells out “ATHENS.”

“My advice for younger artists trying to get into public art is just to keep trying,” he says. “You’ll be rejected 100 times before someone lets you put up one mural… but you gotta keep creating and not let that stop you from putting your visions out there. Someone will love them, but if they just stay in your head, nobody will get the chance to see them.”

After returning home to find that classes had been suspended for the semester, Shaw set out to connect people who have been sheltering in place through a new project called “Quits from Quarantine.” Using an open call through Instagram (@lazerchef), Shaw mailed six wooden quilt pieces to each interested participant to decorate. Returned pieces will be assembled into a large display representing creativity from across the country.