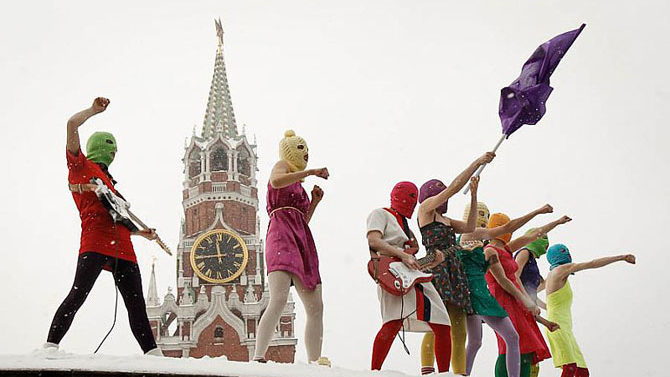 Two members of the Russian punk band Pussy Riot remain behind bars following their actions in protest of Vladimir Putinâ€™s ever-lengthening rule of the Russian Federation. As part of a wave of protests ahead of the March reelection of Putin, the band and feminist collective performed, without permission, their agitprop anti-Putin anthem â€œPunk Prayerâ€ inside a prominent Moscow cathedral. A video available on YouTube shows the colorfully masked women singing, â€œSaint Mary, Virgin, become a feminist and drive away Putin,â€ as the authorities drag them into custody. Two of the women face up to seven years for the charge of â€œhooliganism.â€

A wave of international solidarity has sprung up in the wake of the detentions, even joined locally by Athens band Reptarz2, who closed a recent show at Flicker with the unfurling of a banner reading â€œFree Pussy Riot!â€ The Free Pussy Riot Facebook page features similar demonstrations of support from across the globe.

The bandâ€™s trial is only the latest cause cÃ©lÃ¨bre in whatâ€™s becoming a worldwide coordination and communication of protests and uprisings, starting with the Arab Spring and Mediterranean austerity protests and spilling into wider Europe, the United States, Latin America and parts of Asia. And the Putin governmentâ€™s reaction represents the sort of out-of-proportion response found nearly everywhere protests have broken out.

As the stakes get higher, it appears that governments are increasingly prepared to use the powers at their disposalâ€”military and legalâ€”to stamp out dissent. Last month, Blackhawk helicopters could be seen performing military exercises over downtown Chicago in preparation for Occupy-type protests at next monthâ€™s NATO summit. In anticipation of protests at Septemberâ€™s Democratic Party Convention, the Charlotte city council voted to designate certain events as â€œextraordinary,â€ where police could all but disregard the Fourth Amendment and search and frisk anyone deemed suspicious. Unsurprisingly, it will be a Bank of America shareholders’ meeting that is first designated as an â€œextraordinary event,â€ during which the Constitution is held behind a cordon.

In March, President Obama signed into law anti-protest legislation that creates nebulous and roving spaces with special laws similar to Charlotteâ€™s. Updating an older, more narrow law, the new bill declares that any space overseen by the Secret Service is subject to different laws, different interpretations of the Constitution than those observed everywhere else in the country. An attempt to â€œimpede or disrupt the orderly conduct of Government business or official functionsâ€â€”an Occupy â€œmic check,â€ for instanceâ€”can be prosecuted as a federal offense, punishable by up to 10 years in prison. But as legal writer Dahlia Lithwick points out, Secret Service-protected National Special Security Events are not limited to presidential functions, but can include such â€œspecialâ€ events as some basketball games and concerts. The floating boundaries mean that protesters might not know where their First Amendment rights end and where imprisonment begins.

It is right here in Georgia, of all places, that we might find some hope. A recent General Assembly bill limiting the rights of union members was struck down after Labor aligned with Occupy and the Tea Party in opposition to the legislation. Drafted by the state Chamber of Commerce, SB 469 targeted union protests at places of residence, while excluding other groups (such as anti-abortion activists, whose tactics still include assassinations and fire bombs). The bill was sponsored by four American Legislative Exchange Council legislators, including your local ALEC lackey, Sen. Bill Cowsert.

Despite the decidedly conservative bent of the bill, the Georgia Tea Party Patriots joined the opposition, citing the billâ€™s impingement of First Amendment rights. Republic Reportâ€™s Zaid Jilani reminds us that it was the activists of the original Tea Party generation, Samuel Adamsâ€™ Sons of Liberty, who â€œregularly protested outside of the homes of British colonial officialsâ€ and might have fallen into the purview of the proposed law. Debbie Dooley, a national Tea Party Patriots official, roused Teamsters and other union members to a standing ovation at the legislative hearing as she decried the â€œassault on our First Amendment rights.â€ As governments around the world continue to sharpen their tools in defense of the elite, it will take more scenes like this oneâ€”coalitional and multitudinousâ€”to maintain and expand democracy.