James B. Osborne, the blind labor organizer, Socialist and Congregationalist preacher returned to Atlanta in May 1906. His first order of business was to set up a lecture rebutting the claims of the wealthy evangelist R.A. Torrey, who maintained that low wages and unemployment could be solved by prayer and positive thinking. 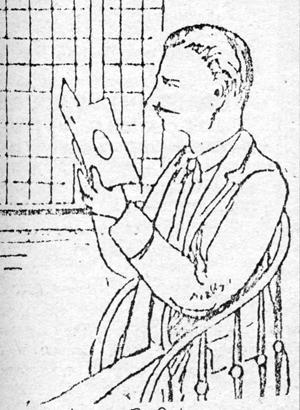 On the evening of May 28, Osborne addressed a sympathetic crowd of 600 at the Grand Opera House. Of the Reverend Dr. Torrey Osborne said, “It is impossible for a man who has lived in opulence, traveled in the best style, and eaten the best food to think other than that things are all right.” Osborne did not restrict his criticism to Torrey: “The modern Christian church does not cry out in favor of the 1,700,000 children who work in the factories of this country and are robbed of the opportunities for manhood and womanhood, and no preacher in Atlanta could do it and hold his job 15 minutes. If Dr. Torrey did it, the business men would cut of their support of him.”

Five weeks later, on July 4, 25 delegates assembled in the Senate chamber of the Georgia Capitol for the Socialist Party of Georgia’s first statewide convention. Down the hall the remnant of the state’s once-powerful Populist Party, in which James Osborne had once figured highly, had assembled for its last convention.

Osborne was one of three members of the Socialist’s platform committee, which called for abolition of the poll tax, institution of the secret ballot, protection of black voting rights, mandatory and universal free public education through age 16, abolition of child labor and the wage system. Though they took no position on women’s suffrage, the Socialists, in defiance of state law, nominated Mrs. M.A. Thomas of Augusta for state school superintendent, probably the first nomination of a woman for elective office in Georgia history. As the head of their ticket was James B. Osborne, Georgia’s first Socialist gubernatorial candidate.

The Socialists largely conducted their campaign through public speaking. The Atlanta police arrested a socialist orator named Fitts for speaking on the street without a permit.

On the night of Aug. 21, Osborne spoke to 500 people on Marietta Street in front of Folsom’s restaurant. The police observed without interfering, but when he returned two nights later, an officer interrupted his address and asked if he had a permit. Osborne said he did not and the policeman told him to dismiss the gathering. Osborne refused and was arrested for blocking a public street and speaking without a permit, the same charges he had been arrested on nearly 13 years before only a few blocks away.

Osborne was brought to the Recorder’s Court and fined $25, a merciful judgement compared to the $100 he had been assessed in 1893. When neither Osborne nor his fellow Socialists offered to pay the fine the judge explained that the alternative was 30 days in the stockade. Osborne said he understood and was taken away to conduct his gubernatorial campaign from jail. (This would not be the last Socialist campaign conducted from behind bars in Atlanta: Eugene Debs ran for president from the Atlanta Federal Penitentiary in 1920.)

Atlanta’s Socialists had arranged to meet in the Fulton County courthouse on the night of Sept. 7 to protest Osborne’s arrest, but they found the building locked and barred against them.

The next morning Atlanta Mayor James Woodward announced that he had pardoned the blind candidate at the request of his brother, Edward Osborne. Woodward, who 20 years before had been a fire-breathing street agitator for the Knights of Labor, warned Osborne that he was henceforth forbidden to address any gathering on the streets of Atlanta. Three days later Osborne was denied a public speaking permit but does not seem to have pushed the matter any further.

Georgia’s general election, scheduled for Oct. 3, was basically a legal technicality necessary for ratifying the results of the Democratic primary. Osborne’s opponent was former Interior Secretary and Journal editor Hoke Smith, a moderate progressive who had won the nomination by trumpeting the shrillest racist rhetoric of the Democratic candidates and by garnering the unlikely support of his old Populist tormentor, Tom Watson.

Georgia’s Socialists kept up the thankless fight for several decades, but James Osborne’s name does not appear in the few newspaper accounts of the party that I have found after 1906. Osborne seems to have been the only Georgia Populist to emerge from the wreckage of the old party into a harsher critique of capitalism and a higher vision of human dignity. Though sometimes something of an opportunist and a crank, James Osborne deserves a place of honor in Georgia history as a rare strong voice for labor.

Next Week: The Dog That Has My Soul: Benjamin H. Osborne