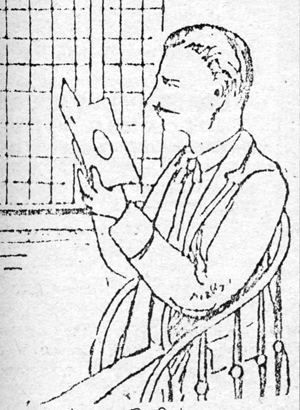 On Nov. 30, 1893, Atlanta labor organizer and orator James Osborne was denounced by his union for carrying on organizing activities without authorization. Osborne refused to surrender his membership card and his local voted unanimously to censure him.

Unfazed, Osborne headed for Savannah to organize that city’s house painters and decorators. He announced that he would speak in front of the Chatham County courthouse on the night of Dec. 8, but the city government refused him permission. Osborne told the Savannah Press that he would comply with the ban and told the reporter that he was in the process of appealing his Atlanta conviction for speaking in public without permission. He managed to get use of Turner’s Hall for Dec. 9 and went around the city passing out notices for his speech: “A Corporation’s Creed: The Public Be Damned.”

Osborne was soon back in Atlanta, speaking in front of the courthouse denouncing his union for their repudiation of his work in their behalf. This prompted a letter to the Journal from B.A. Bray, president of Local 28 of the Brotherhood of Painters and Decorators. Bray included a letter from the general president of the union in Chicago who described Osborne as “an unknown quantity… His action while here did not create any confidence in him.” He concluded: “And now you tell Osborne that the best way to make sure of the success of No. 28 is to deposit his card and pay his dues to your local union. Tell him that deadhead members do not help to make success of unions” (I hope it is unnecessary to add that the original meaning of “deadhead” was an empty railroad car or non-paying passenger).

Osborne resurfaced a few months later in Washington, D.C., with the Commonweal of Christ, better known as Coxey’s Army, a pilgrimage of unemployed men, mostly from the West and Midwest, who converged on the capital on May Day 1984 to demand government action against the sever nationwide depression. The Commonweal drew attention to real problems in a dramatic way, but its leaders were the weirdest collection of cranks ever assembled on the continent; most socialists, populists and labor unions kept their distance from this ambulatory freak show, but James Osborne hastened to join them on their final approach to the capital. A Journal reporter found Osborne at the Commonweal’s encampment in Washington and described him clad in a neat gray suit sitting in a buggy with “General” Jacob Coxey. Osborne told the reporter that his position was “adjutant to the general commanding” and that his job had been as an advance man for the “army,” scouting for campsites and hostile local cops.

When Osborne returned to Atlanta he told the Constitution that he owned no gray suit and had never sat in a buggy with Coxey. He went on to detail his close friendship with Coxey, his important role in the Commonweal, and his successful speaking tour of the Northeast, culminating with a rousing ovation for him in Boston’s Faneuil Hall.

Osborne had returned to Atlanta to attend the state convention of the Populist Party. One of the first items of business on the convention’s agenda was a resolution condemning Osborne’s imprisonment. Two black delegates spoke in favor of the resolution and Osborne was called on to make a speech. He thanked the convention for their support and said that he expected to see most them in their homes counties on his upcoming speaking tour. The convention passed the resolution enthusiastically.

Osborne’s new job was state lecturer for the Populist Party. On Aug. 2, he was in Cusseta, below Columbus, debating George Monroe, a Democratic candidate for state senate. The Journal reported that Osborne’s applause “came from the colored side of the house.” On Aug. 22, Osborne was in Harmony Grove (present-day Commerce) to debate Dr. H.H. Carlton of Athens before a large crowd from the Populist strongholds of Jackson, Banks and Franklin counties. Each debater spoke for two hours. The Journal reported that “Osborne and his arguments were made to appear very small,” but the People’s Party Paper reported that “Osborne used argument and Carlton abuse of Osborne.”

In September Joseph S. James, a Democratic state senator stated that he would like the opportunity to debate some Populist. He quickly received a telegram from James Osborne offering to debate him in every congressional district in the state. Interviewed in Atlanta, Senator James said he would respond to Osborne soon, then hurried to Thomaston to make a speech. Osborne telegraphed him to say he was still awaiting a reply, which apparently never came.

Osborne and other Populist speakers took on the Democrats at every crossroads in Georgia in the summer of 1894, and they came close to victory. It took a campaign of unprecedented violence and fraud for the Democrats to elect William Atkinson governor. Osborne hit the road to assist his party elsewhere.