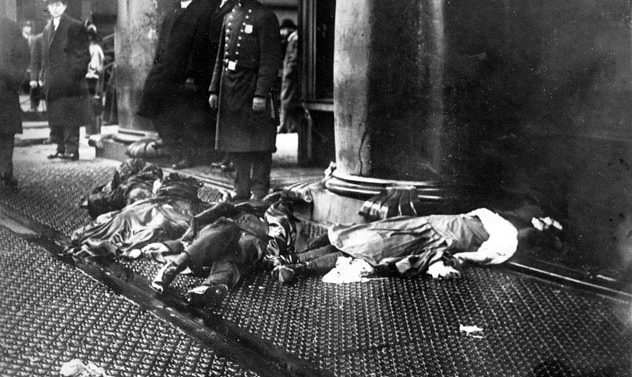 Sixty-two people jumped or fell to their deaths trying to escape the Triangle Shirtwaist Factory Fire.
by Ed Tant March 17, 2021

It is fitting that Women’s History Month is observed in March. The commemoration traces its roots back to the celebration of the first International Women’s Day in Europe on Mar. 8, 1911.

Just days after that observance, a tragic event in New York City would leave an indelible mark on the history of women and the American labor movement.  On Mar. 25, 1911 a fire at the Triangle Shirtwaist Factory—a sweatshop in New York—claimed the lives of 146 workers, almost all of them immigrant women. To this day, 110 years later, the event known as the Triangle Fire still is remembered as a dark day in the history of this nation and a reminder of the struggle and sacrifice of the women and men who fought for better wages and working conditions in America.

Owners of the Triangle factory locked the doors of the sweatshop to keep workers in and labor organizers out—a decision that led to tragedy when, according to Doris Weatherford’s American Women’s History, the fire began when one of the factory’s few male employees accidentally dropped a burning match near oil cans, which ignited fabric in the locked sewing room. Dozens of people were burned alive, or died leaping from factory windows or plummeting down elevator shafts when fire department ladders proved too short to reach the workers on the building’s upper floors.

One of the workers who did survive was Rose Freedman, who remembered the living nightmare of the infamous fire until the day she died at the age of 107 in 2001, nine decades after the tragedy was forever seared into her memory and into America’s history. “The executives, with a couple of steps, could have opened the doors,” Freedman told producers of a PBS documentary on the fire that aired in 2000, “but they thought they were better than the working people.”

Just under 18 when the fire broke out in her workplace, Freedman dedicated the rest of her long life to the causes of women’s rights, workplace safety and equality for women. She was a working-class heroine who, for all her long life, was proud that she refused to be bribed by bosses who tried to pay her to lie that company executives had not locked the women inside the sweatshop.

The owners of the Triangle factory were acquitted of manslaughter charges, and three years after the fire, a civil suit on behalf of the dead and injured workers brought paltry payments of $75 each to nearly two dozen families who had lost loved ones in the 1911 fire.

The labor movement found more martyrs in Alabama on Apr. 8, 1911, when 128 prison inmates forced to work as miners in the state’s notorious “convict leasing” system were killed in an explosion. Memories of the Triangle tragedy were fresh in the minds of millions of Americans when the mining accident happened, but since the forced laborers were African Americans serving jail time, there was little sympathy for their plight in Alabama or across the rest of white America.

Industrial accidents continued to bloody American workplaces after the tragedies in New York and Alabama. According to historian Howard Zinn, in 1914 some 35,000 American workers died on the job, and another 700,000 were injured. The labor movement exposed and fought against such grim statistics, but the carnage continued throughout the 20th Century, and it continues today in unsafe workplaces in the United States and around the world. In 1991—80 years after the Triangle fire—25 workers at a North Carolina poultry processing plant died in a fire in their locked workplace. The plant’s owner was jailed for involuntary manslaughter. More recently, 1,100 workers were killed in 2013 in an accident at a factory in Bangladesh that made clothing for corporate giants like Walmart and The Gap.

More than a century after the Triangle Fire, the sad words of Freedman still echo down the corridors of history: “That’s the biggest mistake—that a person doesn’t count much when he hasn’t got money.”