Christians Should Be Wary of Trump 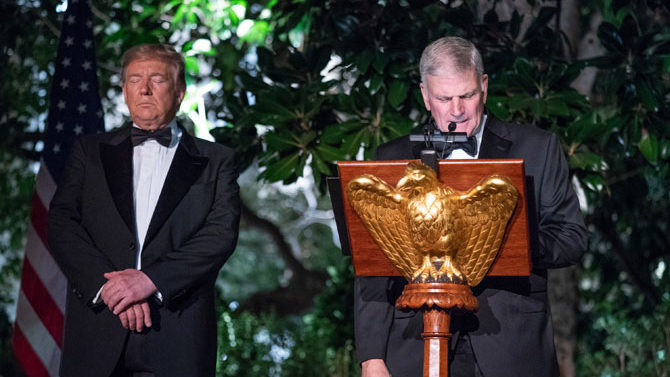 As 2019 drew to a close and the new year of 2020 dawned, Donald Trump was stained with being only the third president in American history to be impeached by the House of Representatives. Andrew Johnson was impeached in the 19th Century, Bill Clinton in the 20th, and now Trump has been impeached in the 21st. In 1974, in the wake of the Watergate scandal, President Richard Nixon resigned rather than face impeachment in the House and conviction and removal from office by the Senate. The Nixon who ran for the presidency as a law and order candidate faced possible jail time, but his resignation and later his pardon by successor Gerald Ford preserved his post-presidency perks and pension.

Trump’s impeachment caused ripples among white evangelical Christians who make up much of the president’s political base. An editorial published in Christianity Today in December called for Trump’s removal from office. The magazine said that Trump “attempted to use his political power to coerce a foreign leader to harass and discredit one of the president’s political opponents.” It called such conduct unconstitutional and immoral and lamented that “the reason many are not shocked about this is that this president has dumbed down the idea of morality in his administration.”

After The Christian Post embraced Trump, a longtime editor, Napp Nazworth, resigned in protest, and a Georgetown University professor, Paul D. Miller, wrote a dissent headlined “Convict Trump: The Constitution is more important than abortion.” Miller told Christian Post readers that “Christians should advocate for President Donald J. Trump’s conviction and removal from office by the Senate. While Trump has an excellent record of appointing conservative judges and advancing a pro-life agenda, his criminal conduct endangers the Constitution.”

For millions of the white evangelicals in Trump’s national base, the president is a me-me-me messiah who is rubber stamping the atavistic agenda of the religious right. As the annual holiday honoring the life and legacy of Martin Luther King Jr. comes again later this month, evangelical ministers and churchgoers might do well to consider the words that the civil rights leader and Baptist minister wrote in his famous “Letter From Birmingham Jail” in 1963, when he was incarcerated during protests against racial segregation in that city. “We will have to repent in this generation not merely for the vitriolic words and actions of the bad people, but for the appalling silence of the good people,” he wrote in his message that was aimed at white ministers and congregations who, in the face of injustice, “remained silent behind the anesthetizing security of the stained-glass windows.” King told his readers that he, too, saw the church as “the body of Christ,” but he cautioned them that “we have blemished and scarred that body through social neglect and fear of being nonconformists.”

Trump is courting evangelicals again in this year’s presidential election with the formation of an “Evangelicals for Trump” coalition. For so many of them, Trump has an Elmer Gantry-esque appeal. Biblical and religious precepts advocating Christian stewardship of our planet and admonishing against people losing their souls to gain the world get short shrift in the political agenda of the religious right. The white evangelical vote will be in Trump’s pocket during this year’s race for the White House, a race that Trump will probably win unless voters with “2020 vision” for our country and planet flock to the polls. As the presidential campaign heats up in 2020, all Americans should remember the words of warning that King wrote in 1963: “Nothing in all the world is more dangerous than sincere ignorance and conscientious stupidity.”