The Bill of Rights Is Under Attack 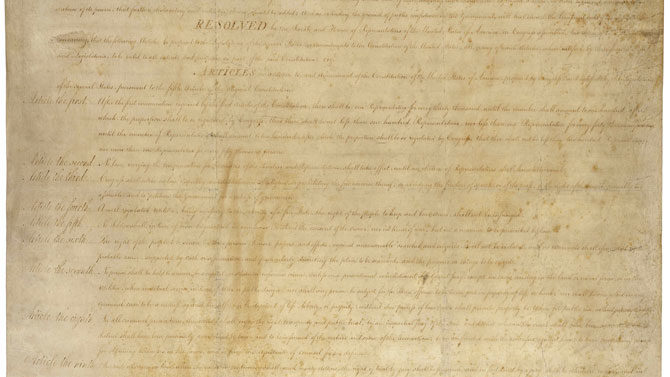 It has been 230 years since Congress first proposed a Bill of Rights on Sept. 25, 1789. That sweeping document was adopted by a majority of the states and incorporated into this nation’s Constitution in 1791.

Today, the Bill of Rights is under attack from courthouses, statehouses and the White House. The words of Earl Warren, who served on the Supreme Court beginning in the administration of President Eisenhower, still apply today in these times of President Trump: “It is doubtful that Congress would pass the Bill of Rights if it were introduced today.” Attorney F. Lee Bailey agreed with the assessment of former Chief Justice Warren, saying, “Can any of you seriously say the Bill of Rights would get through Congress today? It wouldn’t even get out of committee.”

Those assessments have been true throughout American history, and they are especially true today. From the Jim Crow laws of racial segregation in the 19th Century to the “Red Scare” hounding and jailing of American dissidents in the 1920s and 1950s, politicians and judges of both political parties often have viewed the Bill of Rights as a nuisance rather than a necessity.

Today, it is Donald Trump and his “Trumpublican Party” who stand as clear and present dangers to such long-held American values as equal rights and the rule of law. In the past and in the present, America often has failed to live up to its ideals, but the Bill of Rights has been a beacon of hope and a tool for reform for more than two centuries. Women, African Americans, workers, gay Americans and more have used the Bill of Rights to press for needed social change throughout the history of this nation. Today, the president and his political party would block the long path of progress blazed throughout the history of this country by those who would hold America to what Martin Luther King Jr. called “the true meaning of its creed.”

In It Can’t Happen Here, his 1935 novel about a fascist dictatorship in America, Sinclair Lewis used fiction to warn his readers that the seeds of authoritarianism could take root right here on American soil. If Lewis were alive to write today, in these times of Trump, he could write a sequel titled It Has Happened Here. While Trump and his GOP sycophants in Congress will howl that Democrats are “socialists” as the 2020 campaign heats up, one can only hope that Democrats will counter with the moniker of “fascist” against Trump and his cronies. Alas, so far the “f-word”—fascism—has been used mostly by the pitifully few Republicans who are willing to stand up to this president’s mean-spirited machinations.

In 2015, a year before Trump was elected, a few Republicans warned of his authoritarian tendencies, but their voices went unheeded by most of the GOP. Republican Max Boot of the Council on Foreign Relations said, “Trump is a fascist, and that’s not a term I use loosely or often, but he’s earned it.” GOP stalwart John Noonan scorned Trump’s proposed “Muslim ban” by saying it was “fascism, period. Nothing else to call it.” Conservative radio host Steve Deace agreed with Boot and Noonan, saying, “If Obama proposed the same religious registry as Trump, every conservative in the country would call it what it is: creeping fascism.”

Today, such warnings are rare but needed in a nation whose president and so many of his supporters seem all too willing to trade the Bill of Rights for a bill of goods. Alan Charles Raul, a Republican attorney who served in the administrations of Ronald Reagan, George H.W. Bush and George W. Bush, was concise and correct earlier this year when he wrote, “Americans should know better than to acquiesce in assaults on basic constitutional principles. It ought to be widely understood that declaring the press the enemy of the people, politicizing criminal prosecutions, or vilifying the race or religious background of judges or immigrants is un-American. Civics education has plainly fallen down on the job if citizens don’t know enough to protest attacks on the rule of law from on high.”