Should Georgia Change Quarterbacks in Midstream? 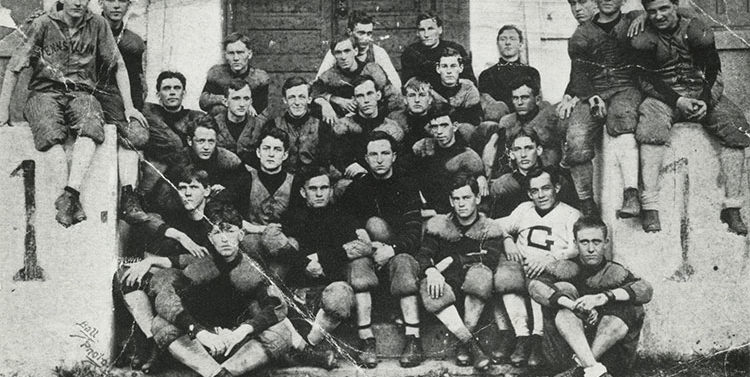 No, this is not the author’s high school football squad: It’s the 1908 UGA team. Credit: Hargrett Rare Books and Manuscript Library
by Pete McCommons December 22, 2021

What began mid-season as whispers is now a chant: “Play JT” Never mind Stetson, the kid who came off the back bench to direct the offense and make himself indispensable while JT was injured. Never mind: Dispense with Stetson. Anybody with the athletic alacrity to turn on a TV knows more than Coach Kirby Smart about quarterbacks, and Bulldawg Nation has decided there is no way to win anymore without JT throwing.

Believe me, I empathize. I have been there. Sure, it wasn’t in college. It wasn’t even in the upper echelons of high school football, but I’m here to tell you these decisions are tough, and you have to live with them the rest of your life.

We had just won our high school region championship after a revenge playoff victory against the team that spoiled our undefeated season. Unfortunately, after our vindication we had to wait three weeks until the North Georgia championship game. I don’t remember why there was such a long delay, but our coaches were faced with the problem of what to do with us for such a long period of practice before the big game against Monticello.

Our assistant coach came up with a bright idea—one no more popular with our crusty old head coach than he was. Our team ran the single-wing formation—once the standard lineup of every high school and college football team, but by then obsolete. Our new assistant put over the idea of using the three weeks of practice to install a brand new split-T offense, just, you know, to keep us from getting bored and losing our edge before the big game. Our head coach thought, “Whatever,” and gave his permission.

Football aficionados know that the single wing was a power formation designed to move the defense out of the way by force. The split-T was just the opposite—a speedy offense based on brush blocking, quick handoffs and a quarterback who can run or pitch out as the play develops and can also pass.

In other words, our assistant coach had a three-week hall pass to turn a bunch of elephants into a squadron of gazelles, neither impeded nor aided by the head coach, who sat on the bench smoking Lucky Strikes and talking football with his friends.

The task, of course, had to be undertaken with the personnel at hand—no transfer portals—and that immediately showed a big problem with the whole split-T idea. Our best passer was also our best runner. The decision was made to use his running instead of his passing, since we didn’t throw that much anyway. So they plugged me into the quarterback slot. I had never played that position, but basically, all I had to do was take the snap and hand the ball off or pitch it out to our all-state tailback.

We spent those three weeks retooling—not running our old shove-them-out-of-the-way offense, but instead learning to open them up and run by them, with always the threat of a pass—maybe—to keep them honest. As the showdown finally approached, we were looking forward to hitting them with our surprise, state-of-the-art offense.

By the luck of the draw, the game was played in our home stadium, which was packed. Monticello was undefeated and had a trio of speedy backs who, of course, ran out of the T-formation.

That night we led them at the half by a touchdown. Then, early in the second half we had a touchdown called back when our lineman jumped offside. Their fast backs began to churn up yardage, and things were looking bad as they scored and then scored again.

We had our secret formation, and as things went from bad to worse, our guys grew increasingly eager to unleash the split-T and blow the game open. But Coach kept on running our old offense—the same play over and over, no deception, no finesse, few passes, not enough touchdowns. Our guys kept asking each other, when can we go to the T?

I already knew the answer. The night of the game, after those three long weeks of learning the new formation, when the team was finally out on the field warming up before the kickoff, our old coach had walked by. I suggested that maybe I should throw a few to loosen up my arm. He stopped in mid-stride and squinted at me through the smoke, as if trying to remember why I might be asking such a silly question. Then he replied, “Son: You don’t ever want to change horses in midstream.” Then he walked off and never looked back. I have occasionally looked back.