The SEC and the College Football Playoffs Are Rigged 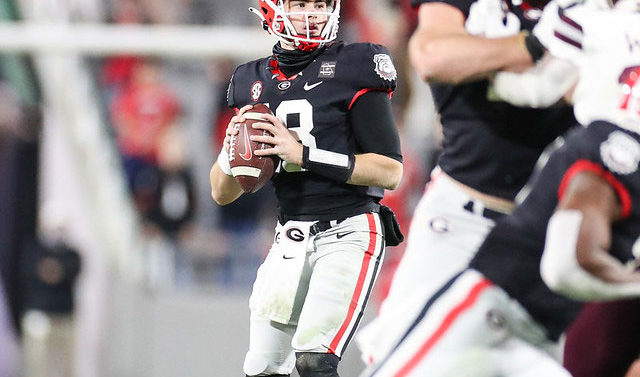 The Deep State kept JT Daniels out of the Florida and Alabama games. Credit: Chamberlain Smith
by Pete McCommons December 16, 2020

This year’s SEC race was rigged. It was stolen from the UGA Dawgs by a deep-state (below the Gnat Line) conspiracy in league with operatives in Alabama. I am calling on Georgia’s attorney general to file an interstate lawsuit directly to the Supreme Court.

The College Football Playoff committee will soon be voting on the playoffs. It is our job to see that they do not steal the vote and shut out the Dawgs, as the SEC has done. UGA has every constitutional right to pursue a path guaranteeing that every legal vote is counted.

You’re probably saying, “Wait a minute. The Dawgs lost to Florida and Alabama, and that knocked us out of contention.” Do you believe everything you read in the fake sports pages? That’s what they want you to think, because the College Football Playoff is dominated by radical leftists, and those radical leftists will do anything to keep the Dawgs out of the playoffs.

Why, you may ask? The answer is simple. The radical leftists who control the playoffs are owned by Alabama. That’s why they will do anything in their considerable power to keep the Dawgs out of the playoffs. It’s a simple matter of money and recruiting prospects and bragging rights. They are the radical elite, and they do not want to let Georgia into their club.

Why? Simple. Because they know we’re better than they are. That’s why if we can’t join ‘em, we’ve got to beat ‘em. Stop the Steal!

Now look. I’m not an investigative reporter. I’m not even a sports reporter. But even though I don’t know how they did it, I know they did it; otherwise, the Dawgs would have won. They rigged it. The Dawgs were barking up their tree, and they shut us down. It was done at the highest levels.

I’m trying to get at the truth here. If something happens to me, well, you’ll know I found it. That’s all I can say.

But look, it’s all about the quarterback. Keep your eyes on the quarterback. That’s where they’re getting to us. Fromm left. That could have been OK. He was good but not great. That could have opened things up. But the deal was already done at that point. Justin Fields had already left. Why? Ask the Deep State. Then we got Jamie Newman from Wake Forest—just the quarterback we needed. But, mysteriously, he “opted out.” Never took a snap. How does the Deep State do it? But that’s still OK, because we got JT Daniels and D’Wan Mathis. But JT comes with a bum knee, and the other guy gets a brain tumor. Swear to God—just like the Deep State gave it to him. Now he’s OK, but he’s leaving, too.

So here’s the deal: We open this season with no quarterback, so we have to go with Stetson, a guy who’s not big enough to see over the defensive line, and that’s who we put up against Florida and Alabama, and you know what happened. But it was rigged. Daniels was sitting right there on the bench. Daniels, who could outthrow Florida and Alabama both, but is just sitting there while their linemen bat down Stetson’s passes.

Too bad Daniels’ knee hadn’t healed. Those scores could have been reversed. But here’s where the fix comes in. Daniels was ready. You heard him in the press conference after the Mississippi State game; he said it himself. He was pronounced medically ready to play after the first game.

Why didn’t he play? So Florida and Aabama could win and knock the Dawgs out of contention once again. And just to make sure, they put our best defensive back on a flimsy little motor scooter at night when he was tired after a game and made sure he got hit. Don’t you see? They don’t leave anything to chance. It’s got conspiracy written all over it. A conspiracy to collar the Dawgs.

It’s huge, but it won’t work if we refuse to concede. No more rigged seasons! Let the Dawgs play in the playoffs with the quarterback they rightfully should have been playing all along. If they don’t vote for the Dawgs, their vote is fraudulent. Count every legal vote! I’m calling on the athletic department to sic their elite strike force of lawyers on the College Football Playoffs. Tie them up in court and force the decision into the Georgia legislature. They always do what’s right. Stop the Steal! Go Dawgs!