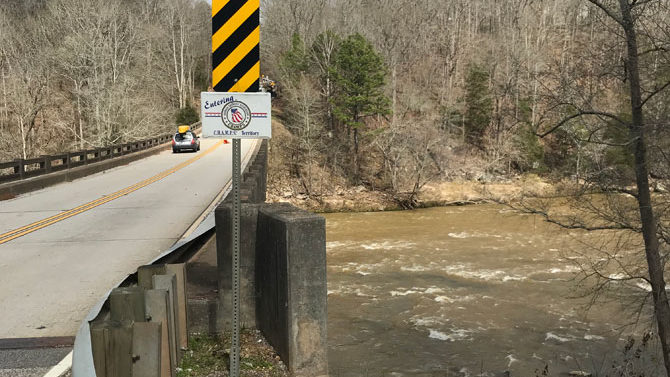 In the darkness of the early morning hours of July 11, 1964, four white men patrolling the downtown streets of Athens watched a car bearing Washington, D.C. license plates drive by Guest’s Garage on Hancock Avenue. Three African-American men were riding in the car, heading east through town.

As recounted in Bill Shipp’s 1981 book, Murder at Broad River Bridge, one of the white men said, “Looks like some of Lyndon Johnson’s boys. Let’s go get us a n—–.”

Less than an hour later, the driver of the D.C. vehicle, Lemuel Penn, was shot dead at the Broad River Bridge, 25 miles from Athens in Madison County. His assailants—Joseph Howard Sims, Cecil Myers and James Lackey—were all members of the Athens Ku Klux Klan. Lt. Col. Penn and his two companions were Army reservists returning home after training exercises at Fort Benning in Columbus.

After the klansmen returned to Athens and Guest’s Garage, owner Herbert Guest, also a KKK member, asked what had happened. Sims joked that their mission was unsuccessful because “the car [carrying Penn and his two comrades] didn’t go into the river.”

Surprisingly, Penn’s killers were indicted by a Madison County grand jury. Their 1965 trial, held in the late summer in Danielsville, was a sham, however. For starters, the all-white-male jury consisted of at least a few Ku Kluxers. They deliberated for just a short time, returning not guilty verdicts against Sims and Myers. The third Klansman, Lackey, initially confessed, fingering his two companions. During the trial, however, Lackey recanted. He was never tried for the murder. After the acquittal, the defendants celebrated in the courtroom with their wives and others. The local prosecutor shook Sims’ and Myers’ hands, telling them, “It was nothing personal.”

Fast forward 55 years. Ahmaud Arbery was jogging through a Brunswick neighborhood on Feb. 23. He apparently stopped at a house under construction, perhaps to urinate. At the same time, two white men, father and son, set out in their pickup truck to ambush the black jogger. They met Arbery in the middle of the road. The father, 64-year-old Gregory McMichael, stood in the bed of the truck brandishing a pistol. The son, Travis McMichael, 34, stood at the side of the truck, holding a shotgun. Video footage shows the younger McMichael shooting Arbery three times with his shotgun. After the third blast, Arbery is seen running away, but within seconds, he collapses to the ground. Arbery, 25 years old, is dead. The police arrive on the scene, make their report and tell the McMichaels to “go on home.” It was a little after 1 p.m. It was broad daylight.

Gregory McMichael had previously worked for both the Glynn County police department and the district attorney’s office. After the shooting, the current DA recused herself from the case and brought in a prosecutor from a neighboring county. That DA advised police that there was “insufficient probable cause” to issue arrest warrants. Once again, as in so many instances past and present, it seemed that vigilante justice would prevail.

Then, in early May, the 30-second graphic video of the shooting emerged. The Georgia attorney general and the GBI got involved. More than two months after Arbery was gunned down, the McMichaels were arrested and charged with felony murder and aggravated assault.

Penn was buried on July 14, 1964. His body rests in the Arlington National Cemetery in Washington, D.C. Arbery’s funeral was held on Feb. 29. He is buried in New Springfield Baptist Church Cemetery in Waynesboro.

Now we wait to see how this case plays out. Will redress be had for the family of yet another African-American man summarily executed by someone who is white? Or will two more white men be absolved because they decided it was time to “Let’s go get us a n—–”? Will the long arc of history continue on this cruel path, or will it finally bend toward justice?