JD Hollingsworth Is Back With Another Novel Only He Could Write 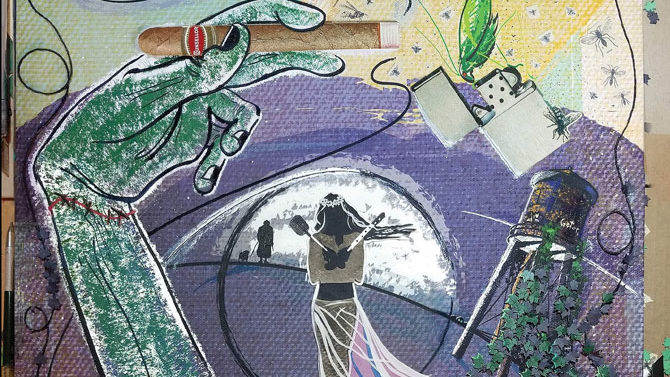 “Then, as if from a mist, an old woman, not five feet tall, emerged from the mass of blossoms, vines and stalks. She stepped forth from the jungle like Henry Stanley, drifted over with a toothless smile, and took hold to Gator’s arm. The multiple, colorful calico housedresses she wore, one upon the other, and the gingham apron above it all bestowed upon her the psychedelic regalness of a Celestial Empress Dowager, and had perfectly camouflaged her, like some tropical mantis hiding in plain sight on the jungle orchid it mimics, among the crazy quilt of untamed inflorescence from which she had materialized. A mass of intricately braided gray hair crowned her head. A dribble of dried snuff juice streaked her chin. She smelled like a hobo.”

This is from JD (Doug) Hollingsworth’s new novel, Frankenstein’s Paradox,  published like his previous novel, The Work, by Helena Cavendish deMoura’s Casa Forte Press, over in Decatur.

This paragraph sort of gives you the idea of how Doug writes with a lush, restrained, rococo flourish, troweled on in layers that expand the meaning if you see them but don’t interfere if you don’t. You don’t have to know Henry Stanley. You get it even if you’ve never actually suddenly seen that mantis on that leaf, or if you’ve never known an old country woman in multiple housedresses. There’s so much telling detail in every sentence that it doesn’t really matter if you have to look up a few words that elegantly exceed your vocabulary.

This is a short book, but it is dense. Every sentence is freighted with images, as if written in illuminated letters. Once again, Hollingsworth brings us Middle Georgia characters who could not have been imagined in any brain but his, or maybe they imagined him.

When I reviewed The Work, I expressed my amazement that anybody I knew could grasp so much about so many things and could write about them in such minute detail. I asked Doug’s friend and fellow musician Dave Marr about him. Dave, no slouch himself when it comes to writing, replied, “Doug has always been one of those people who’s smarter and better at everything than normal people. He’s a great musician, a brilliant artist and designer, knows a shitload about music and films and books and science, and has better stories than anyone else in the room at any given time. And now he’s a great author. Of course. Fucker.”

Frankenstein’s Paradox tells the story of Roosevelt Delano Franklin (sic), aka Gator, who after almost drowning as a boy is left with poor impulse control, which leads to time in prison and difficulties upon his release as he tries to reassemble his life in his small hometown of Utinahica, GA, a place familiar to readers of The Work.

Frankenstein’s Paradox is peopled with what Gamble Rogers would have called a randy retinue of rednecks. Hollingsworth has a deeply uncanny ear for dialect and the ability to render it in words that look nonsensical until you start pronouncing them in your head and then you realize that is exactly the way we sound.

Gator is a good and kind, though potentially violent, guy, whose brilliance is largely lost on his companions, though he does find appreciation and even love during his stint working in a very unlikely health food store, where his views of the hippies provide some comic relief. In fact, despite the seriousness with which Gator tries to understand his own life and the lives around him, the book is filled with comic touches and characters and with musings on life and fate.

As usual, when you step into Hollingsworth’s alternative Georgian universe, you are transported into the life of an unorthodox protagonist surrounded by weird characters who fulfill stereotypes on one level while smashing them on another. You just have to go with the flow and let his brilliance bear you along to the finish. Hint: Study the book’s cover, also by the multi-talented Mr. Hollingsworth; right there in his mesmerizing illustration he depicts the whole plot of the book.

I’m happy to announce that Hollingsworth will be here on Friday, Dec. 20 at 6 p.m. at Little Kings to attend a book launch party for Frankenstein’s Paradox. You can buy a copy literally right off the press and get it signed on the spot by the author. And just maybe this guy who prefers to speak on the printed page will read a couple of those pages to us.

Plus, afterward at the the firehall on Prince Ave., Dave Marr and friends will play and also the T. Hardy Morris band.