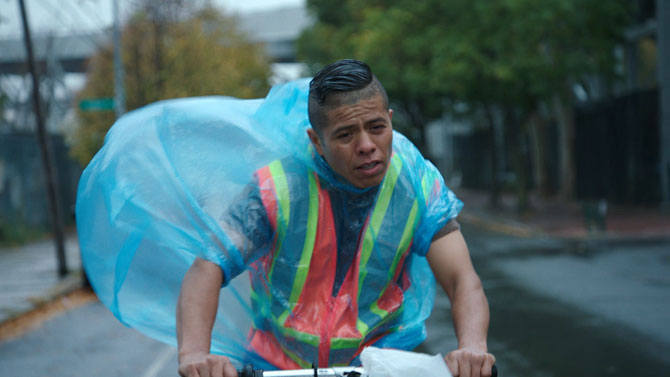 A bunch of guys live together in a crowded apartment near the Sunset Beach area of Brooklyn. They all work various low-paying jobs six days a week, but on the seventh day they can rest and enjoy life. Sundays, they are a soccer team, competing in a league made up of teams like theirs. They are good, thanks to their leader, José—their best player, their spark plug. This coming Sunday, they’re playing for the league championship. This is a big deal for them all. The game will be tough, but with José making plays, they know they can do it.

What they do not yet know is that José’s boss has ordered him to work this Sunday. José is the bicycle delivery guy for takeout orders from an upscale restaurant. This Sunday his boss is having an important private party, and he needs José to bus tables, in addition to his delivery duties.

José tries to explain to his boss why he can’t work, but his boss is offended by the idea that “playing soccer” could be more important than his party.

José is good at his job, and the city becomes a character in the movie as we see him whizzing along through traffic with everyday Brooklyn in the background. José needs his job. He has just learned that his wife is pregnant, and he needs to bring her to the city and find a place for them to live. He is in no position to choose the game over his job, as one of his teammates, who also works there, plans to do.

En el Séptimo Día (On the Seventh Day) takes us through the week leading up to the game, as José makes his deliveries, wrestling with his insoluble problem—his job impinging on his world of friendship, support and shared endeavor.

Oh, and they’re all Mexican immigrants of uncertain documentation, and part of the brilliance of the film is that director Jim McKay finesses the barrier of stereotypes and puts us right there in the apartment and on the soccer field with these guys—who, by the way, have never acted before and are, in fact, pretty much like the characters they portray.

There was a one-time showing of En el Séptimo Día at Ciné last week. (It’s available on HBO and Amazon.) The film was sponsored by UGA’s Willson Center for the Arts and Humanities, and McKay was there to introduce his film and discuss it afterwards. His descriptions of how they made the film with untrained actors and people off the street on an extremely low budget that demanded they make every shot count was a fascinating look behind the camera.

McKay is a former Athenian who became friends with Michael Stipe while shooting music videos for R.E.M. He and Stipe formed an early film partnership that has endured, and R.E.M. helped underwrite this film, continuing their long tradition of doing what they can for good causes.

Well, we were surrounded last week at Ciné with good causes and the people who make them happen—to the vast benefit of Athens. Ciné, of course, continually brings us these films that engage us with life, and  the Willson Center constantly brings us the best minds and skills to inform and entertain us and keep us in touch with what matters. And it’s not just for UGA, it’s for Athens. We are all invited to the lectures, readings, discussions and performances that the Willson Center serves up throughout the academic year.

Assets like Ciné, the Willson Center, the UGA Performing Arts Center, the Classic Center, our theater groups and, of course, our music scene might be considered frills, but they are dynamic economic drivers that bring people here to live, to shop, to eat and drink and enjoy Athens, which wouldn’t be Athens without them.

McKay’s film, a direct outgrowth of this whole Athens thing, is a telling example of how a serious artistic endeavor can beguile us into a better understanding of other people and our own lives. Art, in hands like Jim’s and all those other practitioners offered us through the Willson Center, helps us get a kick out of seeing life clearly and seeing it whole.