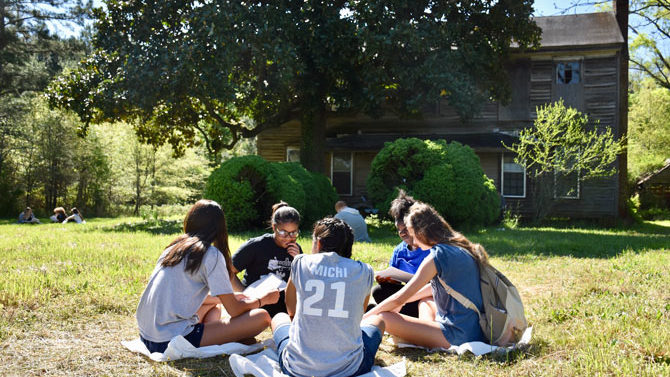 Last year, I started a project designing two maps for a forthcoming book from UGA Press about a community of enslaved people in 19th Century Georgia. Over the past five years, historians Christopher Lawton, Laura Nelson and Randy Reid have researched hundreds of thousands of pages of documents pertaining to the Cobb and Lamar families and sifted out tiny fragments of evidence to tell the stories of some of the people they once owned. A few weeks ago, Christopher asked if I would like to join him and his co-authors on an excursion to one of the abandoned Cobb family plantation homes outside Athens. The authors were working with a group of approximately 45 students from Athens Academy, Putnam County Charter School System and Athens Technical College to learn more about life on this plantation and the people who were enslaved there. Groups of students from these three schools have been working together for the past five years through the Georgia Virtual History Project to explore local sites, research and write local history and use technology to share it with the public.

The plan for the day was to read an excerpt of a chapter from the upcoming book, along with some of the letters the family wrote in the 1840s describing the details of life and death on this plantation. In addition to Lawton, Nelson and Reid, we would be joined by Ben Bracket and Athens historians Charlotte Marshall and Milton Leathers, himself a Cobb family descendant.

Even with that impressive roster of historians, what convinced me was the nonchalant mention by Christopher that we would also be joined by Mark Evans, program chair of the Emerging Technologies Program at Athens Technical College, who was bringing his team of paranormal investigators.

Last Wednesday, I was greeted by Christopher, who introduced me to everyone. I could hear something buzzing and noticed a slow-moving drone circling the house. The ghost hunters were already busy. I couldn’t restrain myself,  made a beeline over to Mark and started asking about all the specter detectors he had spread out in the bed of his pickup truck. Mark told me that many of the devices and batteries he had charged overnight were already significantly drained before he even got things started. Apparently, this is a phenomenon that is consistent with the presence of ghosts (or of crappy batteries). The investigators also registered high electromagnetic field values from one side of the house, even though the house had no power, and there were no power lines anywhere close to it.

One of the highlights of the chapter we read is a transcribed letter explaining how an enslaved body servant of the family, an elderly man named Bob, was growing bald and had been asking for a wig—specifically a red wig. Students were shocked by the realization that this man had walked the same exact ground they now sat upon, tended the same ancient boxwoods that now rustled beside them in the breeze, and dreamed of owning just one small luxury before he died. They realized there are the ghosts popular culture has taught us to imagine, and then there are the ghosts of the past that truly haunt our understanding of the present. Yet, in the middle of this moving moment of reckoning, the paranormal investigators got a strong response on one of the “spirit boxes” they had built. For a flash of a second, it seemed that they were communicating with the spirit of a slave named Nanny, whose death there in the 1840s was addressed in one of the Cobb-Lamar letters. They asked her if she knew what color wig was purchased, but she appeared to respond that she didn’t know.

A small group of Athens Academy students found their equipment showed that the temperature was suddenly dropping in one of the rooms. Mark’s team noted the rapid temperature change as Academy students and I passed the device around and noted that it was oddly cold to the touch. Later, a group of Putnam County students and Mark’s team recorded that a wire strung across the same room would start to shake every time they asked the cold spot, “Are you here, and can you move the wire?”

As I said goodbye and headed back to work, I invited Mark and his team to stay overnight in the Flagpole offices. Many of us have seen and heard strange things in this 1907 house. He seemed very interested. On second thought, I might want to check with my co-workers. I think they might not like the paranormal investigators stirring things up. That’s fair.

Larry Tenner is Flagpole’s production director. A portion of this story was ghostwritten by Christopher Lawton.