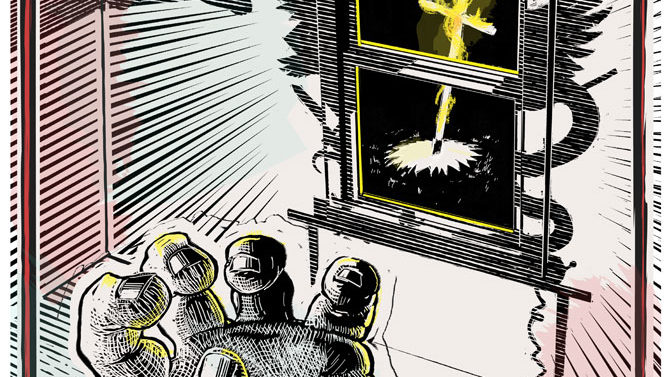 Everybody who writes a Southern Gothic novel is announced as the next Flannery O’Connor, so that by now we have so many Flannerys running around that the advent of another doesn’t mean much.

Maybe that’s just as well, because otherwise I would be saying that Doug Hollingsworth is the latest peacock on the farm.

Doug has written a novella, i.e. a short novel, that is the first of an interrelated trilogy. If you have been around a certain part of Athens for a pretty long time, you probably know Doug, although he has been living in Brooklyn for a while now, using his design skills at top New York museums. That’s not really a surprise, because in Athens he designed ads for Flagpole. He played guitar in the Star Room Boys and has worked with Kathy Kirbo’s reef-protection program.

Doug’s novella is titled The Work, and it is stunning—illuminated by his eerie, woodcut-like illustrations, too. I’m no professor of English, but in addition to being blown away by this book, I can also see a little of how Doug did it—his ear for language, his eye for telling details, his sense of humanity caught in the forces of good and evil, with the cosmic shooting right into the everyday.

Not everybody wants to read a book about a God-struck South Georgia taxidermist, but if you pick this one up and get through the first few pages of exactly replicated, below-the-gnat-line, mushmouth drawl, you’ll be caught up in the world of Ansel Bragg—a world pretty much limited to Utinahica, GA. (Look it up.) This book is layered, and it goes deep. Maybe if we’re throwing around comparisons, we ought to go on and mention Mr. Faulkner, too, because there are lots of levels working at once here.

The publisher describes The Work as Southern Gothic and magic realism, and it’s true—not because Hollingsworth imposes those qualities on us, but because he elucidates what’s already there. Everything Southern is gothic (“portentously gloomy or horrifying”), with a lot of magic snapping around, too.

Ansel runs the Hide ’n Skeet Taxidermy and Gun Range in Utinahica, supported by a cast of finely drawn characters who amble in and out of the action. But be warned that this is not “Hee Haw.” These people are Middle Georgia hicks, it is true, but the power of Hollingsworth’s writing is such that Ansel encompasses “the human heart in conflict with itself” as fully as anybody in Yoknapatawpha or Milledgeville.

Maybe there is some common denominator in music and art that translates directly to writing. Whatever, John Douglas Hollingsworth has jumped off the subway and hit us upside the head with the human condition.

The plot is simple: Ansel gets caught up in a masterpiece of his taxidermy art that ultimately runs him afoul of God and man, as well as the natural world, including his wife, Hazel. And Doug’s words spin their magic over us so that these rednecks rise into the realm of great literature, because this becomes not just a story, but life itself. Our own lives, our own world hang in the balance, along with the fate of Ansel Bragg. Well, OK; I guess that’s an exaggeration. But, dammit, life, if you take it seriously enough, is an  exaggeration.

That’s what weirds me out about mild-mannered Doug Hollingsworth. How in the hell does he do this? How does he take the same words we know—OK, I had to look up some of them—and make this man and his surroundings come alive? How did Flannery and Bill do it? There’s the magic realism for you: These words, these bitcoins of our common parlance, glow with an inner light that transcends the sum of their little parts. Hollingsworth himself is the taxidermist, wresting liveliness off the inert page.

The Work and Doug’s two other novellas are published by Casa Forte Press, recently established in Decatur by former Athenian and international journalist Helena Cavendish de Moura. The Work will be for sale at Little Kings at 6 p.m. this Friday, Dec. 21. Hollingsworth will be there to sign copies and visit with old friends and new readers. The affair will conclude in time for everybody to stroll down to the Manhattan for Calvin Smith’s annual Christmas show at 8 p.m.