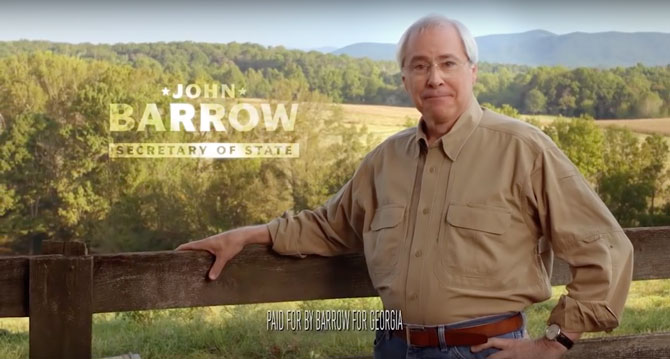 John Barrow is in the runoff election for secretary of state, Tuesday, Dec. 4. He has the handicap of being a Democrat in a statewide race in Georgia, but he has some things going for him that transcend partisanship.

We have already been forcibly reminded that every vote counts, and every vote cast in Athens goes directly to the bottom line in the statewide total. We’ve got a lot of voters in Athens. If we turn out, we can give the total vote a real jolt important to Barrow’s chances and to the Athens area.

Why John Barrow? Well, for starters, he’s smart as a fox, and he’s got a Harvard law degree to prove it. He also has a world of experience in government and politics. His roots go deep in this area. Some of us remember him from his days on the Athens-Clarke County Commission, where he was reliably and outspokenly progressive and never shied away from a fight for a better Athens.

After losing a Georgia General Assembly race to yet another native son, John ran for Congress in a newly gerrymandered (by the Democrats) district that actually did look like a salamander and extended from Athens to Savannah, packing in some Democratic urban areas but inevitably including lots of small-town and rural Georgia on the way. You may have heard that small-town and rural Georgia are not very welcoming to Democrats these days, and John adjusted accordingly. Our liberal commissioner became our moderate congressman, still a reliable Democrat but willing to vote with the Republicans when he had to (against Obamacare!).

That wasn’t enough for the Republicans. They continued to redistrict John into redder and redder districts, lopping off Athens at the outset, and John became the Energizer bunny of Georgia politics, moving wherever his district took him—“the Congressman from Winnebago.”

None of us always liked his votes, but he was not only trying to stay alive politically, he represented his diverse district for a decade, while our state, like our country, became more and more polarized.

The funny thing is, they created an anomaly, an anachronism, a politician who understands firsthand the needs of both urban and rural Georgians—black, white and brown; conservative, liberal and moderate—and how to negotiate effectively within a broken system to serve their needs.

In other words, he’s the very model of what a secretary of state should be. Barrow is experienced in government; he knows Georgia and its people; he’s accustomed to operating bipartisanly; and he is smart enough to manage the multifaceted responsibilities of the secretary of state’s office—not only elections, but corporations, licensing, securities and charities.

And, since he never got to settle in and get comfortable in Washington, Barrow was forced to work his butt off staying in touch with his constituents of all political persuasions. As a consequence, he got tougher, and the more they roughed him up, the more they forced him to understand the needs of his conservative constituents.

So, now we have this native Georgian from an honorable and accomplished Athens and Oglethorpe County family, perfectly well qualified politically, intellectually and administratively to become a positive presence in our state Capitol, able to relate to all sides and competently manage his important office. Barrow has the potential to become a Capitol institution like the late Ben Fortson, the former longtime secretary of state from nearby Washington, GA.

Why don’t we put partisan considerations aside for a change and send a huge, bipartisan vote out of Athens and surrounding counties in support of our native son? We will all be better off in and around Athens with John Barrow as secretary of state.