The Language Archive and The Accidental Big Leaguer

Jackson played in the big leagues with some big names—Ernie Banks, Jackie Robinson, Pee Wee Reese and Carl Furillo, to name a few—and held his own. In spite of some injuries that slowed him down, he amassed 835 hits with a lifetime batting average of .261 that included 103 home runs and 415 runs batted in.

Jackson retired tofa Athens and went into the insurance business. In his 90s now, he still works out at the gym (carefully) and is always interesting at his book-signings. Need a gift for Father’s Day, anybody? 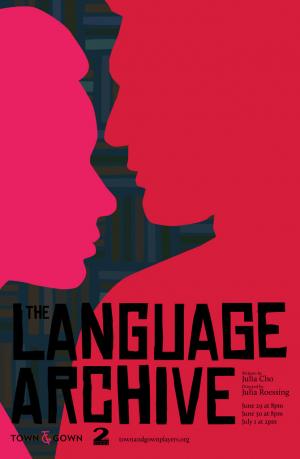 Be sure to check Theater Notes for current performances, and then let’s just get this disclosure right out front. Pub Notes readers, I am back on the stage, and again I play husband to Gay Griggs McCommons’ character. In my first outing, in August: Osage County, I opened the play with  a 12-minute soliloquy and then jumped into the lake, to be seen no more until the curtain call. This one is a more nuanced role, and it is in a beautiful, wise, witty, poignant jewel of a play. The Language Archive, by Julia Cho, was discovered by Steve Elliott-Gower, who got a group together to read it a year ago. We all loved it so much that we determined to see if Town & Gown would accept it for their Second Stage series of plays. Second Stage productions fit in around the mainstage plays and are frequently more offbeat and quirky.

The Language Archive concerns George, a linguist who is studying dying languages while he fails to notice that his own marriage is expiring from a lack of communication. Just when he must finally acknowledge what is happening at home, an old couple arrive at his language archive who are the last speakers of their language, but they have other issues to address. Hilarity and insights ensue.

Julia Cho views the human condition with the same skewed glance as  Sarah Ruhl, who wrote The Clean House, a T&G hit a couple of years ago. Archive, in fact, brings back three of the actors who made Room such fun: Elliott-Gower, Ginny Simmons and Gay. Elliott-Gower calls on all his extensive acting experience to fill the demanding role of George, the linguist. Simmons brings her own considerable chops to the role of Mary, the wife whose words George doesn’t understand. Shannon Vinson is Emma, George’s assistant, with her own unspoken words for him; Mike Burke plays both a mysterious old man and the creator of the famous universal language, Esperanto. Kathleen McGovern sparkles as an instructor of language and life. Gay knows how to make you laugh and cry as half of the old couple, and she’s helping me with my role as the other half. Julia Roessing directs, with Nathan Altman and Mike providing invaluable assistance.

As I write this, I have to confess to you that I am terrified. The theater is a strange world. You have to memorize everything you’re going to say and try to make it sound real, while at the same time learning where to stand and where to move and all that stuff, and time is passing and opening night is approaching. Meanwhile, our director has been battling family illnesses, and we can’t get into the theater until the very week we open. We’ve been rehearsing upstairs Flagpole and also at the library and at Creature Comforts. It’s like being in a movie where the plucky crew hangs together and makes the production happen in spite of difficulties and calamities. The show must go on, and when it does, I urge you to be there. This play is funny, and it’s sad. It’s about the big ones: life and death, love and marriage and cooking.

But, after all this work, The Language Archive has only three performances: Friday and Saturday, June 29 and 30, at 8 p.m. and Sunday, July 1, at 2 p.m. All three shows are in the theater at 115 Grady Ave., behind the Taylor-Grady House. Get yourself a ticket through townandgownplayers.org. It’s quick and easy, so do it now, while they’re available.