Legacy of the Cotton South

You never know when history will strike. On the advice of Steven Brown, University Archivist Emeritus and Panopticon of Knowledge Concerning Anything Historical, I walked over to the Hargrett Library of Rare Books and Manuscripts in the Special Collections Building on the western edge of the campus. Steven had told me that the library recently uncovered some copies of The Athens Republique, a newspaper edited here in the early 1920s by Julian Brown, an African-American World War I veteran.

The Hargrett is, of course, a treasure-trove of history, and while waiting for The Republique to arrive from the stacks, I spied a large volume entitled The Courthouse and the Depot: The Architecture of Hope in an Age of Despair, A Narrative Guide to Railroad Expansion and Its Impact on Public Architecture in Georgia 1833-1910, by Wilber W. Caldwell.

Curious to see the connection between courthouses and depots, I was immediately confronted with a history of the Georgia Railroad, chartered in Athens in 1833. By the time our trestles over the North Oconee and Trail Creek connected Athens to the world in the 1880s, Athens was a center of manufacturing and cotton-factoring.

And as the cotton economy boomed on the backs of low-cost laborers, depots and courthouses, which had started out as unassuming buildings that reflected the dispirited South after the Civil War, began to express the growing confidence of those who benefited from the cotton economy. Depots grew from train sheds to important edifices, and courthouses from utilitarian depositories of the public’s business to grand exemplarsof the prevailing zeitgeist. The Clarke County courthouse on Prince Avenue, which rose about where Wendy’s is now, was our example of that grandeur.

But Caldwell reminds us that the economic progress came at a great price. Of the Mary-Leila mill in nearby Greensboro alongside the Georgia Railroad, he writes: “Still, beyond the perennial fields of white, which were only ten years away from the devastation of the boll weevil, it was a sad kind of progress which created the cheapest, coarsest of textile products with the meanest of unskilled labor working the longest hours in the most unhealthy of conditions for the lowest of wages.”

Even those lowest of wages were denied to African Americans, except for the lowest of the lowest, the most menial jobs in and around the mills—with no jobs at all for black women. When slavery ended, penury began. African Americans were denied the property rights that could have established them as independent farmers, condemning them instead to the inescapable dependence of the sharecropper. 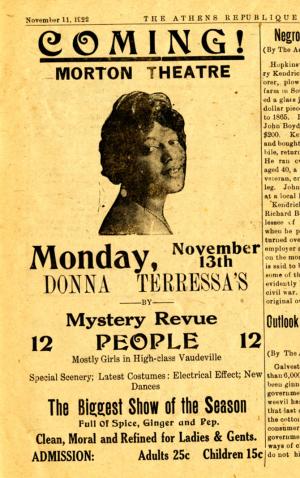 The Athens Republique provides a window into Africa-American Athens in the early 1920s.

When The Athens Republique finally arrived from the stacks, it provided a window into the African-American community here in Athens after the boll weevil had begun to consume the cotton crops in Clarke and the surrounding counties. The short-lived newspaper included lots of social notes, as did all local newspapers of the time. There is a rich record of the community surrounding downtown in areas later torn down to make room for “progress,” involving names still familiar in Athens—Derricotte, Heard, Wilson, Grimes, Harris, Smith, Jackson, etc. In the Jan. 5, 1922 issue, there was an account of local African-American citizens celebrating the 59th anniversary of the Emancipation Proclamation a few days earlier in the Morton Theatre. Now, almost 100 years later, the effects of slavery and its aftermath still afflict our city and our nation. Our African-American citizens still seek justice and equality, and many can identify with the words Brown wrote after an earlier election.

“We told you so: You see, the other fellow got more votes. You can’t solve ‘Race Problems’ with the mouth, you must put brains and unselfishness into the fight.

“One don’t have to jump into the sea because a white man slaps you on the back and tells you you are a great Colored man. He may not mean what you think He means.

“We will learn some day that there is a big moral difference between saving the Race at so much per month and saving it at so much per drop of blood. It is the soul which lives finally, not the stomach.

“Another week has passed and we have not been exterminated. Thank God for that small favor.”