After a lifetime in the newspaper business, Millard Grimes has written a novel that reads like a compendium of every editorial he ever wrote and lays out a blueprint for how to get America back on the right track.

“I thought a novel would be more interesting to people,” Grimes says, “than just a book of essays.”

A professor of English might call The Last New Dealer a book of essays disguised as a novel, but however you look at it, Millard’s book distills his own New Deal views and his encyclopedic grasp of modern American political history.

Before you rush off to Avid Bookshop to buy your copy of The Last New Dealer, let me point out that Millard has not yet found a publisher, because he hasn’t yet been able to engage the attention of an agent. At this point, you can call this review a Flagpole exclusive. It’s possible that eventually he’ll publish on Amazon, but right now, Millard is holding out for a traditional publisher, convinced that his book has a message for all Americans. 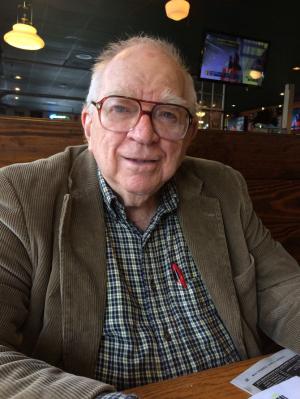 The protagonist of The Last New Dealer is Thomas Alexander Franklin, a successful owner of newspapers who fervently believes that Franklin D. Roosevelt and his New Deal saved this nation and laid the foundation for the prosperity that kicked in right after World War II and persisted until the Republicans finally gained the strength to begin dismantling the New Deal underpinnings. In other words, Franklin is a lot like Millard Grimes. He even sounds like Millard, who not only believes in the efficacy of the New Deal programs, he lived through them. Millard saw firsthand the effects of Roosevelt’s policies on Depression-era west Georgia, where he grew up and came of age.

The Last New Dealer is set during the American presidential election of 1992. Thomas Alexander Franklin believes that a candidate is needed who will unabashedly remind voters that we need to get back to first principles, i.e. the Rooseveltian solutions that truly made America great. Consequently, Franklin sells all his newspapers and begins an independent campaign for president. He naturally believes in the efficacy of newspaper advertising, in spite of the dominance of TV, and he goes to New Hampshire and begins his campaign by driving around the state and placing ads in local papers, getting to know the publishers, with the help of his loyal and experienced driver and others who are attracted to his campaign—along with some of the old Jimmy Carter hands.

Now, here’s an interesting twist: The other candidates in the New Hampshire campaign are the real candidates who ran then: Clinton, Tsongas, Harkin, Brown, Kerrey. And Franklin is right in there with them, as a long-longshot candidate. Utilizing his knowledge of that campaign and his understanding of politics, author Grimes creates a plausible plot and a vehicle for bringing in his lifetime of political editorializing.

In truth, the novel reads like a Platonic dialogue. Franklin’s driver will, for instance, ask him a question about the economic depression of the ‘30s, and the answer will be a pages-long monologue about, say, the Civilian Conservation Corps or the Works Progress Administration and what those programs did to put people to work and to shore up our crumbling infrastructure, not to mention honing skills that helped prepare our nation for World War II.

“The deficit is a paper tiger, mainly used for political purposes. The U.S. has had financial challenges ever since The Revolutionary War, when there was a lot less money around. The most dramatic example was the Louisiana Purchase. Thomas Jefferson was president, and certainly no friend of stronger central government, but he recognized that only a powerful central government with access to money from all the states could be capable of making such a deal…” and so on, at great length.

Reading The Last New Dealer is like riding around listening to Millard talk. He’s a liberal who made a fortune in the newspaper business during the glory days when that was still possible. He was also a newspaper owner who cared about the content in his papers and frequently wrote editorials espousing the principles of his hero, FDR.

Now, at the age of 88, Millard has set it all down in this novel of ideas that really does offer an antidote to many of the ills that beset our nation and a clear alternative to the Reagan quip that the government is the problem. Read The Last New Dealer (and here’s hoping you get the chance—come on agents!) and you will encounter an overwhelming marshaling of history and political philosophy that will show you where we have gone off the rails and what we need to do to get our country headed in the right direction again.