Editor’s Note: Ramsey Nix, a part-time journalism instructor at UGA, sent in this timely comment on the campus carry law, and Pub Notes was the only space we still had open, since I had missed my deadline, as usual. Ramsey is the former editor of Lake Oconee Living, and she has also taught journalism at Piedmont College.

Campus Carry Takes Away My Freedom

Does the door lock from the inside or the outside?

At the start of any new semester, I ask myself this question as I assess my classroom and wonder how I might protect students in the case of a shooting. My concerns are rooted in the fact that 190 shooting incidents have occurred on college campuses since 2001.

House Bill 280, the “campus carry bill” that Governor Nathan Deal signed into law the day before UGA’s spring commencement ceremonies, renders my security concerns obsolete. My question about the lock on the door seems quaint by comparison to the new questions I will have to ask myself the next time I welcome students to a new semester.

The campus carry law means that I am no longer free to declare my classroom a gun-free zone. That is a freedom I hold dear because I do not believe that more guns make us safer.

On the contrary, more guns lead to more shootings. According to a recent report by the New York City Citizens Crime Commission, 64 percent of campus shootings occurred in Southern states where gun laws are lax and licensed gun dealers abound.

A recent Johns Hopkins study concluded that “policies that allow individuals to bring firearms onto college campuses are unlikely to lead to fewer mass shootings or fewer casualties from those shootings.”

While this report also focuses on other risks associated with increasing gun availability on campus, it fails to mention the psychological impact these guns might have. Fear disrupts learning. It also disrupts teaching. School should serve as a refuge—a place where ideas come under attack, and the only defense you need comes in the form of logic and reason, not armor or firearms.

People say the campus carry bill is largely symbolic, that it doesn’t essentially change anything. But the symbol of a gun destroys the sanctity of a classroom.

A gun is a tool of annihilation. It not only has the power to destroy bodies; it can silence ideas. What is a college campus if it is not a birthplace of ideas? [Ramsey Nix] 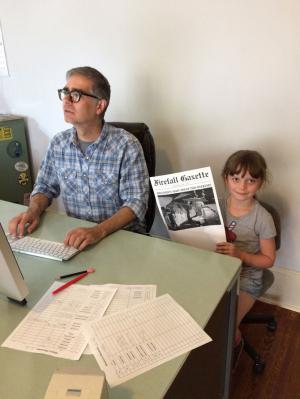 Larry Tenner showed Clementine Gerow how to lay out a page for her Chase Street Elementary newspaper.

A visiting journalist dropped by Flagpole last Wednesday to get some tips that she can use in her own work at Chase Street Elementary. Clementine Gerow, a first grader, hung out with us for a while and learned about selling ads from Advertising Director and Publisher Alicia Nickles. Production Director Larry Tenner showed Clementine how he composes the paper with his computer, and she got a good look at the inside of a newspaper office and the many different tasks that go into preparing the publication.

I interviewed Clementine about why she likes newspapers: “… writing, taking pictures—I’m working on my own newspaper—puzzles, comics, ads.” And she interviewed me, asking “What is the hardest part of your job?” and “What do you like best about your job?” Those are two, direct, simple questions that call for a thoughtful answer, and they show that Clementine already has a good grasp of how to go right to the heart of the story.

Clementine’s visit was part of Chase Street Elementary’s gifted enrichment program, which lets kids visit businesses that interest them and get a first-hand view of what goes on there. Considering the understanding Clementine already has of journalism, we’re hoping some day she’ll come work at Flagpole for a while before she is hired by The New York Times. [Pete McCommons]

Long before there was Avid, there was The Old Black Dog Bookstore, in the house at 1700 S. Lumpkin St. in the heart of Five Points. They’re having an Old Black Dog reunion there this Saturday, May 13 at 10 a.m. Stop by the old place and share your memories of that beloved sanctuary. [PMc]